I share Elianna Bresler’s outrage at the plastized bodies exhibit at the Atrium Mall in Chestnut Hill (near Boston). Next we will have plasticized bodies on our coffee tables! Why not? It’s educational. The use of real bodies sells tickets, but it is human dignity that is taking a hit. If anyone wishes to contact me I will discuss what action might be taken. The Atrium Mall is owned by the Simon company which also owns the Chestnut Hill mall and many other malls in the area.

Below is an op-ed I wrote that appeared in some local newspapers in 2007 about a similar exhibit. Almost everything in the op-ed applies to the exhibit at the Atrium. However the source of the Atrium bodies is unclear, but this is not the primary reason I object to these exhibits. Read the whole article to learn more:

This is wrong.On Sunday, Oct. 28, at 2 p.m. (note:This will be rescheduled), I will be at Bodies: the Exhibition in Framingham holding a sign that says “This is wrong.” Ihope you will join me.

Bodies The Exhibition consists of 25 plasticized, real human bodies, and severalhundred body parts. You will hear a lot of questionable claims about thisexhibit from Premier Exhibitions, the exhibitor.

Premier Exhibitions is a publicly held company whose duty is to maximize its value for its shareholders. Almost nothing it says can be taken at face value. The bodies belong to unknown Chinese citizens, who did not give permission for this use of their bodies. It is possible that they were the bodies of prisoners, even of executed prisoners. China is notorious for an organ transplant business that may depend on the bodies of political prisoners.
In spite of claims to the contrary, there is no paperwork trail for the bodiesin this exhibit, and nothing that Premier Exhibitions says about the origin ofthe bodies can be accepted as if it was a fact. You will hear that the exhibitis legal. In the first place the word legal has almost no meaning in China. In the second place, these exhibits are largely unregulated in the United States.

Of course you are aware of the numerous recalls of dangerous products from China. It would not be surprising if the bodies in this exhibit were “recalled.” You will be told that there is no substitute for learning from real bodies, as opposed to models. Real bodies are not subject to a plasticizing process. Real bodies decay, rapidly. These bodies have been turned into plastic models. Infact, they are imported as models, not as bodies. You will be told that the bodies are on loan; they are rented for a cool $25 million.

How can something be wrong that is claimed to be and actually may be educational, not to mention fascinating and beautiful? We learn from everythingwe do and see. So these claims cannot justify anything. For example, in Auschwitz, the so-called Nazi doctors kept some of their victims from the gas chamber to preform hideous experiments. It is possible that something was learned, but those experiments were still wrong.

In the Tuskegee Syphilis Study, African-American subjects were not treated for syphilis long after a cure became available, in a study that morphed from studying treatment options to studying the course of the untreated disease (without the subjects’ informed consent). This was wrong, even though something may have been learned.

If you visit this exhibit, you may learn something about the human body. Whatyou are also learning is that it is permissible to plasticize real human bodies, display them in all sorts of poses for the titillation of the public, and allowthe public to gawk at them for the price of an admission ticket.

You will learn how companies market something that is wrong by hiding behind claims of education, health, and science. You will learn how companies market something by claiming it has health benefits such as getting people to stop smoking or or refrain from overeating. (We are surrounded by real people dying from smoking and overeating, and don’t learn from them.) There is contempt for the public in this kind of marketing. The attitude seems to be that the more outlandish and fantastic the claim, the more likely the public will fall for it.

There are some things that we know, instinctively, to be wrong. For example, itis wrong to commit murder. It is wrong to hurt other people’s feelings. And itis wrong to show disrespect to other human beings. It is not necessary, and perhaps not possible to prove that these things are wrong. As the poet Lucebert said, “All things of value are defenseless.”

Why is this exhibit wrong? Out of respect for the living, the bodies of the deceased should be treated with respect. By treating our bodies as mere objects like this exhibit does, we cheapen the value of life. As we reduce ourselves to objects, we open ourselves to the attitude that who cares if a few, or a few million, of these objects are damaged or killed. Hitler and Stalin both dehumanized their victims to make their destruction more palatable. The cost toh uman dignity of this exhibit is incalculable. Is that a price worth paying for things that could be learned just as well by other means? We don’t need to see “real” plasticized bodies to know that human beings are complicated and fascinating. In fact we never need real objects to educate ourselves.

I am not willing to pay the price. Are you? 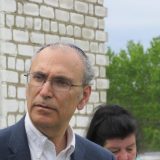 Aaron Ginsburg
Aaron Ginsburg grew up in Newport, Rhode Island, and blogs about Jewish Newport. He has also spoken about his adventures in family history, genealogy and travel. He cofounded and leads The Friends of Jewish Dokshitsy jewishdokshitsy and blogs about his hometown Newport jewishnewport.blogspot.com