Aharon Appelfeld isn’t an author to be taken lightly.  He’s made a prolific career out of writing about European Jewry pre-, during, and post-Holocaust, and it’s never for the faint of heart. 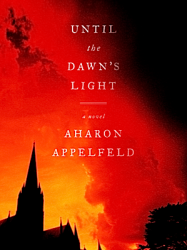 His new novel, Until the Dawn’s Light, is no different.

The book hits the ground running, or more appropriately, on the train speeding north, as we meet Blanca, the protagonist, fleeing with her young son Otto on a train in 1912 Austria.  Clearly something is rotten, something terrible has happened, and it doesn’t take long to find out the story.

And it’s not a happy story.

Blanca, is in short, an assimilationist’s nightmare.  Once a promising student, she channels her father’s failures and the anti-Semitic slurs of her romantic interest and eventual husband, the appropriately-titled Adolf Hammer, into her decision to convert to Christianity, leave her studies, and become a devoted wife.  Her blissful and tragic naivete and blind trust of muscular and oh-so-masculine Adolf, coupled with her mentally unstable mother and Jewishly zealous grandmother, result in the quick materialization of the horrific narrative that ensues.

Life as a traditional Christian housewife doesn’t go as planned.  As Adolf goes gradually over to his dark side, he regularly beats Blanca and chastises her for not being hardy enough.  Her Jewishness, it seems, is her fatal flaw, as she lacks toughness and self-discipline.

Her suffering only deepens.  Her mother dies, her father loses his sanity and vanishes from his Jewish home for the elderly, and only her blind grandmother remains alive, standing resolutely at the entrance to the now-empty synagogue, launching tirades at the list of Jews who have converted out of the faith.  At the same time, Adolf’s drunkenness and beatings increase, as do his anti-Semitic rants.  After what Adolf perceives as a lifetime of misfortunes at the hands of the Jews, including being expelled from high school by Jewish teachers, reprimanded by Blanca’s protective Jewish doctor, and mistreated by Jewish businessmen in his work life, he bursts out with a chilling pronouncement that the Jews should be “eliminated.”  Storm clouds are now gathering not just for Blanca, but for all the Jews in Central Europe.

With the birth of a son, Otto, Blanca’s hardships continue.  To protect herself from Adolf, she finds work at an old-age home in another town six days a week, and a buxom, earthy, country woman assumes her role as mother to Otto and wife to Adolf.  As Otto’s health deteriorates, Blanca is increasingly marginalized during her short visits home, yet somehow mother and son develop a loving bond that is nothing short of heartbreaking to read about.

The story can’t end well, but it doesn’t stop you from rooting for Blanca and Otto and a better life free from terror and persecution, hoping that it’s not too late.  It’s the most Jewish of tales- trying to survive in the face of the ultimate evil.  Sometimes it works out (think Chanukah, Purim, Passover), while at other times not (the Inquisition, Crusades, Holocaust, etc).  All I’ll say is that we get a little of both in this book.

Until the Dawn’s Light is a beautiful book for all the wrong reasons, a stark reminder of a time when European Jewry doubled down on the values of universalism, humanism, and assimilation and lost.  It’s a sad commentary on the failure of the Jewish attempt to be a part of enlightened Europe and a perfect fictional complement to the classical Zionist writings of Leo Pinsker or Moses Hess, who both knew by 1862 that Europe and the Jews was going to end badly.

In the immortal words of Hess, “even an act of conversion cannot relieve the Jew of the enormous pressure of German anti-Semitism.”

Unfortunately, when we meet Blanca, she still hadn’t woken up to that realization, and by the time she did, it was already too late.

Until the Dawn’s Light

Translated from the Hebrew by Jeffrey M. Green