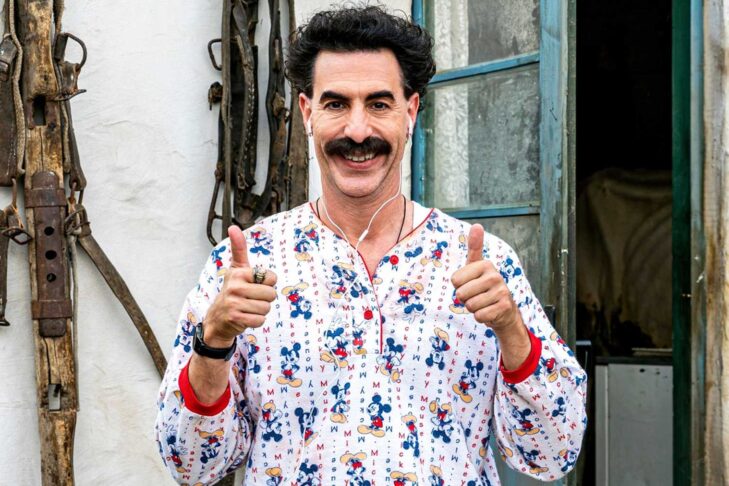 How does one review a film like this? Officially titled “Borat Subsequent Moviefilm: Delivery of Prodigious Bribe to American Regime for Make Benefit Once Glorious Nation of Kazakhstan,” this mockumentary asks viewers to spend 90-something minutes at the same level of discomfort and anxiety about what will happen next as the first film, “Borat: Cultural Learnings of America for Make Benefit Glorious Nation of Kazakhstan.” Since this is a review—theoretically one you would read to decide whether to watch the film or not—and I assume you want a recommendation, I recommend you watch it. Here’s why.

Fourteen years is a long time between films, and in that time many things have changed. The first “Borat” film, released in 2006, follows Sacha Baron Cohen’s antisemitic, racist and misogynist character to show how all of those sentiments were both present and strong here in America. Two years before the election of President Barack Obama and the false idea of a “post-racial” America, this was at least something that was entertaining to an audience of, let’s say, college-educated progressive types. But in 2020, this is not something that needs to be pointed out. This film, released just before the 2020 presidential election, could have been just a retread of how America is still divided in two. It isn’t. That’s not to say that Baron Cohen doesn’t do what he’s good at, which is getting “regular” Americans to repeat and declare racist and antisemitic things, but this “Borat” film isn’t about Borat at all; it’s about his daughter, Tutar.

While the film takes its time getting there, it’s trying to show what today’s modern conservatism does to women when taken to its natural end. For the majority of the movie, Tutar carries around a book that at first you think is a fairy tale, but in reality is a story intended to keep women submissive, afraid of their sexuality and dependent on men. First you think how ridiculous this is and how backward these people are. But the joke is on us as Borat attempts to give his daughter a full makeover so he can give her to a powerful American in President Trump’s orbit; you realize she’s being taught everything in her fake fairy tale by Americans. It’s of course presented in the most crude and obscene way possible, as that’s the film’s schtick.

Also, at one point, Borat dresses up as a “Jew” and goes into a temple. Maybe it’s just the Jewish historian in me, but his costume might be the most hilariously over-the-top “Jew costume” I have ever seen—it is truly a work of art. (Read about all the Jewish moments in the film here.)

I know what you’re wondering: Is that Rudy Giuliani scene as terrible as people say? Yes. Yes, it is. It’s gross and terrifying for many reasons, but for me the most disgusting reason is this: Giuliani doesn’t hesitate once when he thinks this reporter, played by Tutar (played by Maria Bakalova), fully remade as a Fox News blonde bombshell type, invites him into her hotel room for a drink. If this had never happened to Giuliani before, wouldn’t he pause and think about it first? How many other times has this happened? It is beyond gross. While it’s a short scene toward the end of the film, it does lead to what I can only say is a heartwarming part of the film. I don’t want to give it away, but I certainly didn’t expect to feel anything heartwarming in a “Borat” film.

So, on a scale of one to five, I would rate this sequel a four. As Borat would say, “Very nice!”