A week from today, many of you will listen to the Torah reading about the Akedat Yitzchak, the binding of Isaac, which is traditionally read on the second day of Rosh Hashana.  The moral questions that arise from the story of Avraham’s near-sacrifice of his son are profoundly troubling, and I will by no means attempt to unpack the layers of meaning and interpretation in this piece.

What I will do, however, is present you with a poem entitled “Heritage,” by the Israeli poet Haim Gouri, which is a fascinating companion reading to the text from Genesis chapter 22.

The ram came last of all.  And Avraham 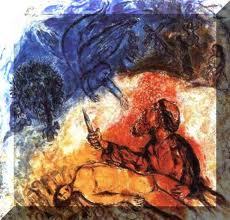 did not know that it came to answer the

boy’s question- first of his strength

when his day was on the wane.

that it was no dream and that the angel

stood there- the knife slipped from his hand

The boy, released from his bonds,

saw his father’s back.

Isaac, as the story goes, was not

sacrificed.  He lived for many years,

saw what pleasure had to offer,

until his eyesight dimmed.

But he bequeathed that hour to his offspring.

They are born with a knife in their hearts.

Numerous themes run through the Torah text and Gouri’s poem, but the last two lines in particular resonate in this season of teshuva and introspection.  While Gouri’s words were written (in 1960) in the shadow of the Holocaust, the question of whether Jews are still born with knives in their hearts is one that can be asked l’dor vador, in every generation.

As we wipe the slate clean on Rosh Hashanah and Yom Kippur, as a Jew I wonder what is so deeply a part of our collective memory and identity that we simply cannot let it go as we start a new year.  As a parent I wonder what I have unwillingly bequeathed to my children.  As a teacher I wonder what I have taught my students which is hidden in the curriculum.

The answers to these questions are not obvious, nor are they easy.  They require us to both look at ourselves and listen to others, to think about our actions and observe the workings of people around us, whether they be fellow Jews, our students, our children, or our co-workers.  Attempting to understand how we influence others, for good or for bad, will allow us all to grow and become better people in the coming year.