“Here We Are” (Promotional still)

Read on for highlights, and find festival information and tickets here. In 1982, Israel invaded southern Lebanon to protect the country’s border towns from repeated PLO attacks. The initial military incursion ended with a partial withdrawal from Lebanon in 1985, but Israel retained some control of South Lebanon until 1999. Hundreds of IDF soldiers died during 12 years of fighting Hezbollah over its occupation of the region. However, a helicopter crash in 1997 that killed 73 IDF soldiers touched off a prolonged protest calling for a unilateral withdrawal from the area. At the center of these protests were four mothers of IDF soldiers who, echoing the reference to the four imahot, or biblical foremothers—Sarah, Rebecca, Rachel and Leah—banded together and called themselves the “Four Mothers.”

Raphael Levin and Dana Keidar Levin’s documentary of the same name situates the Four Mothers movement in Israeli history, bringing in echoes of other powerful, mother-centered movements, such as Argentina’s Mothers of the La Plazo de Mayo. As the Levins show, the Four Mothers movement was powered by maternal energy and was very much a grassroots effort. For three years, the movement gained momentum as they deflected criticism of undermining soldiers’ morale and their naïveté about Israel’s security.

Interviews with the founding members of Four Mothers are interspersed with archival footage of the war and the ongoing news coverage of the movement. In 1999, Ehud Barak was elected prime minister and kept his promise to withdraw from Lebanon. Soon after, Four Mothers disbanded. “Four Mothers” the documentary captures how a peripheral movement came to symbolize a larger struggle for peace in the region. Director Levi Zini’s powerful documentary about Israel’s sixth prime minister offers a complex and nuanced portrait of Menachem Begin. Begin, a longtime leader of the Israeli opposition, was elected to higher office on his ninth attempt. He brought a lifetime of Jewish and Israeli history to his post. Begin was born in Poland, living through the early years of the Holocaust before fleeing east to Russia, where he was imprisoned by the Soviets. During Israel’s War of Independence, he headed the Irgun and ordered the bombing of the King David Hotel where the British were headquartered.

A political hawk, Begin gave the go-ahead to bomb Iraq’s nuclear reactor in 1981. Yet he was haunted by the boondoggle of what the Lebanon war became. To add to his mystique, Begin brokered a historic peace agreement with Egypt that is still in effect. At Camp David, he negotiated the particulars of the treaty as he admired the humanity of Egypt’s President Anwar Sadat and President Jimmy Carter. Yet Begin supported the expansion of West Bank settlements as he shared the Nobel Peace Prize with Sadat in 1978.

Zini’s film is a deep dive into Begin’s fascinating career, as well as a meditation on the man’s multifaceted legacy. “Here We Are” (Promotional still)

Nir Bergman’s nuanced drama spotlights the relationship between Uri, an autistic young adult, and his dedicated father, Aharon. Uri’s estranged mother, Tamara, has long been excluded from this tight father-son relationship. As the film opens, Tamara has obtained a court order to send Uri to a specialized boarding school. She is desperate for her son to make friends beyond his father and to learn to be independent.

Aharon, a graphic artist with a New Yorker cover on his resume, has given up his career to look after Uri. At first glance, Uri could pass for a college student. However, it becomes abundantly clear how limited his world is. He takes care of his fish, eats pasta-shaped stars that his father happily prepares for him and watches Charlie Chaplin’s “The Kid” on repeat.

To dodge Tamara’s court order, the duo set out on a picaresque romp across Israel, which begins in the north of the country and takes them all the way down to Eilat. As the trip progresses, Aharon’s finances grow more precarious, leaving him unable to pay for plane tickets to whisk Uri away to a friend’s farm in Pennsylvania.

While Uri’s autism shapes his unique worldview, it can also cause awkward, even troubling, moments. In one scene, he strips to join an aunt in the shower; the incident further proves that his relationship with his father can be dangerously self-contained and even toxic. Shai Avivi is remarkable as Aharon, whose devotion to his son, which eventually crosses into stifling co-dependence, is both admirable and inappropriate. Noam Imber delivers a stunning performance as Uri that feels like he’s the subject of a documentary.

“Here We Are” received eight Ophir nominations—Israel’s equivalent of the Academy Awards—including Best Film. (The film’s debut at the 2020 Cannes Film Festival was canceled due to the pandemic.) 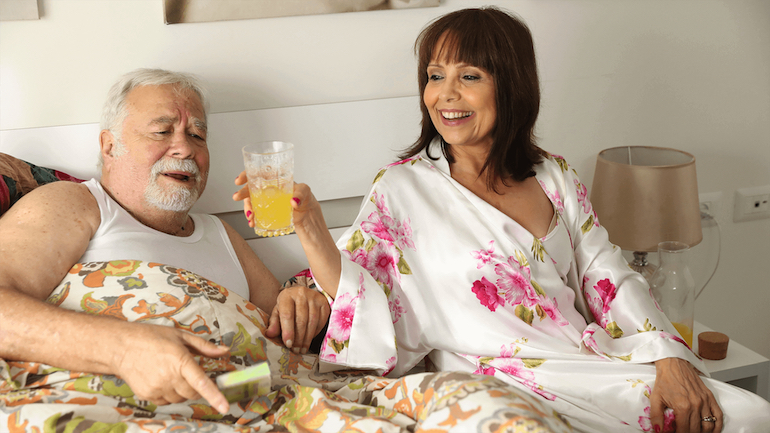 This Boomer-inspired comedy, with its familiar slapstick antics, appeals to more than a graying audience. Tami was part of a successful singing duo with her late husband and is comfortably retired. However, the first thing we learn about her is that she is a notoriously bad driver and has backed her car into Benno in a supermarket parking lot.

After a panicked call to her hyper son, a lawyer, Tami convinces Benno to let her take him home so he won’t sue her. She’s already on the verge of losing her license. Benno—a grouch with a good heart—volunteers for a charity, writing letters to government officials and agencies for people in dire economic straits. As soon as Tami walks into Benno’s shabby apartment, it’s apparent that he also doesn’t have two shekels to rub together. When Tami offers Benno money, he proudly refuses. When she tries to make tea for him, she ignores his warnings about using the kettle and short circuits the apartment’s tenuously rigged electricity. The situation won’t be fixed for days, leaving Benno without a place to hang his hat.

Benno’s daughter can’t take him in, and at Tami’s insistence, Benno ends up sleeping over at her place in an upscale retirement community. Between the nosy neighbors and the improbable ghost of Tami’s pajama-clad husband hanging around and reminiscing about the old days, wackiness ensues. Although this rom-com’s ending is predictable, getting there is more original than the film’s premise indicates. The premise of this short film, directed by Tomer Shushan, highlights the plight of 40,000 asylum seekers from Eritrea and Sudan—many of them working illegally and in inhospitable conditions in Tel Aviv. The “white eye” of the title is a white Israeli man’s stolen bicycle that he finds locked up on a street corner. It turns out the bike belongs to an Eritrean man who unknowingly bought it hot. In just 20 minutes, Shushan tells a powerful story of racism and harmful judgment. The film is on this year’s Academy Awards’ shortlist for Best Live Action Short Film. In 15 minutes, Tamir Finegold explores the devastation of a father’s unreasonable expectations for his teenage musician son. The boy is under tremendous pressure to ace his audition for a place at a selective high school for the performing arts. As he shakily plays the sonata his father has written for the occasion—a piece he practiced many times for his difficult parent—the frustrated father bursts into the audition room to harangue the judges. He then turns on his mortified son and tells him not to bother to tour a school to which he has no hope of being admitted. Finegold deftly intimates that this brutal episode will resonate and traumatize both father and son over a lifetime. This seven-minute animated film shows how friendships forged in childhood can transcend stereotypes that spark hate. The opener for “Sky Raiders,” the feature presentation of the festival’s family program, “Cinema Rex” is set in 1938 Palestine. An Arab girl and a Jewish boy bond over their love of popcorn and the movies. Despite their parents’ admonitions, the young pair persists in their fondness for one another. It’s a profound lesson sweetly and unassumingly presented for children of all ages.