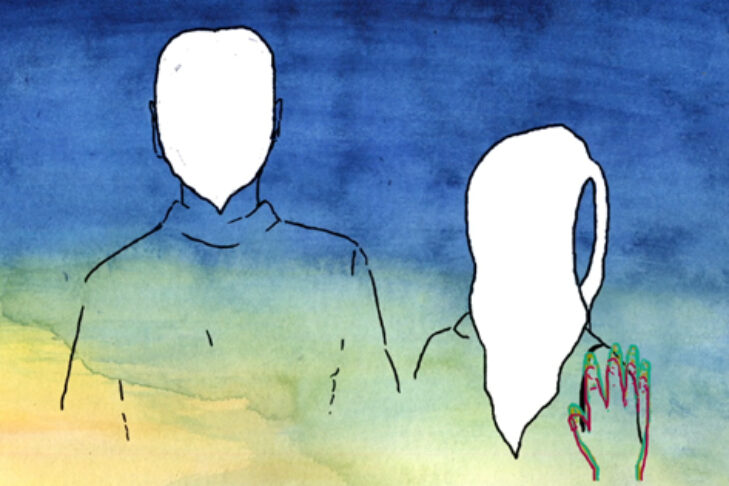 “I Have a Message for You” (Promotional still)

This year, Cohen-Halberstam chose six short films from 260 submissions to produce “Short Film Program: Beyond Expectations.” The shorts will be screened together on Sunday, Nov. 10. The selection process begins with finding films she likes. Delving deeper into those films, Cohen-Halberstam keeps in mind what will complement the 55 screenings in the larger festival. “I’m always thinking about what I can show that I love that also fits together with the other films,” she said. “What makes for a comprehensive and diverse view of the Jewish experience? Shorts are a microcosm of those views, and I look for a thread that draws them together.”

Cohen-Halberstam noted that the shorts comprising “Beyond Expectations” are not only intergenerational in spirit but also show people doing exciting things later in their lives. She highlighted an eight-minute film called “Butterflies” that evokes the emotional center of a father-son relationship. “Gefilte” is ostensibly about making the iconic Jewish dish, but also explores three generations of a Jewish family in suburban Detroit. “The Starfish” tells the story of the filmmaker Tyler Gildin’s grandfather during World War II. As Cohen-Halberstam observed: “Herb Gildin lived for so long without telling the chapter of his life in Sweden [as a Jewish refugee]. The film probes what things are deeply a part of us that we don’t outwardly present.”

Cohen-Halberstam also pointed out that the shorts “Last Class in Baghdad” and “I Have a Message for You” show people looking back at fundamental experiences in their lives. In “The Last Class,” Iraqi Jews now in their 70s recall their time at the last Jewish high school in Baghdad through a scrim of love and nostalgia. In “I Have a Message,” a woman jumps off a train bound for Auschwitz, leaving her dying father behind in the car.

With these vibrant offerings, Cohen-Halberstam hopes to garner attention for short films as a serious genre. “Most of the time, people only see shorts after the Oscar nominations are announced,” she said. “It’s always complicated to create a great shorts program, but well worth it. It’s an art form. Short films tell a story in a very concise, beautiful way.”

This eight-minute Israeli film epitomizes what a short film can do—concisely and poignantly tell a story. A family living on a kibbutz is moving its ailing patriarch to a rest home. What outwardly seems like a leisurely Sunday ride is a fraught moment until an intense encounter with the migration of millions of butterflies. As the father and son revel in the spontaneous nature around them, the inherent love they have for each other also reveals itself.

When is a fish more than a fish? When it’s the ubiquitous gefilte fish, a prominent centerpiece of an enormous seder—one year, there were over 100 guests—hosted by the Hermelin family in suburban Detroit. Histories of family and food merge in this 12-minute short that is as much a celebration as it is an elegy for another time. Each year, Doreen Hermelin makes 200 pieces of gefilte fish from scratch. The month-long project says as much about Jewish ritual and continuity as it does about issues of how much carp, whitefish and pike to mix.

“I Have a Message For You”

First shown as an op-doc on The New York Times website, this Holocaust story has an extraordinary epilogue. Ninety-two-year-old Klara has lived in the same apartment in Tel Aviv for almost seven decades. For the first time, she tells the complete story of how she survived the Holocaust. Klara had an impossible choice to make: If she jumped from the train she was on heading to Auschwitz, she had to abandon her dying father; if she stayed on the train, she would almost certainly die. As Klara tells her story, it becomes clear that three generations later, we still struggle to comprehend the hate that led to the Nazi extermination of the Jews.

“The Last Class in Baghdad”

A reunion of the Frank Iny High School, the last Jewish school in Baghdad, provides a singular view of the once-thriving Jewish community there. These septuagenarians reunite in Montreal to remember their teenage years in the 1960s. The black-and-white photographs and jumpy footage are curated to show an idyllic time when teenagers danced to the Beatles and dressed up for fancy community parties. Shortly after the school was shuttered, these Iraqi Jews scattered across the Diaspora. The film is full of longing and a sweet sadness for a time and place.

Fran Vall is an octogenarian who happens to be a master teacher of Judo and Naginata—Japanese sword fighting. Fran became proficient in these martial arts during her long career in the foreign service. Living in places such as Afghanistan, Japan and the Sudan, Fran immersed herself in the culture at each of her postings. All the while, she is redefining what it means to age. A self-declared person of faith, her Judaism inspires her to continue to learn new things.

At just under 40 minutes, “The Starfish” is the longest short at this year’s festival. Director Tyler Gildin tells the story of his German-born grandfather, Herb, who was saved when his parents sent him to Sweden to escape the Nazis. At just 10 years old, Herb, with his two older sisters, did not see their parents for two years. The family was eventually reunited in Brooklyn, but not before Herb and his sisters endured a difficult two-month journey across Russia and the Pacific. Once in America, the Gildins focused on rebuilding their lives, and for several decades Herb never told his wife or his children about his childhood. At one point, the younger Gildin trains his camera on a reunion between his grandfather and the Swedish family that adopted him six decades earlier. Herb, who died last May at the age of 89, is a charming, affable subject who conveys a little-known chapter of Holocaust history and the role the Hebrew Immigrant Society, known as HIAS, played in saving his life.