Temple Ohabei Shalom—”lovers of peace” in Hebrew—has been celebrating its 180th anniversary for the past year. For those who take note of gematria, this number is significant, as it multiplies 18, the Jewish number for life, or chai, by ten. The oldest congregation in Massachusetts, Ohabei Shalom first met on Rosh Hashanah in 1842, when traditional High Holiday services were conducted in a congregant’s living room. The temple was officially founded the following year by German Jewish immigrants. German Jews were shifting toward a more Reform practice, and the temple’s new congregants took notice. Today, the temple is affiliated with the Reform movement.

JewishBoston recently spoke with Larry Green, who chaired the temple’s 180th anniversary committee, and Rabbi Audrey Berkman, the senior rabbi, about how the year 2022 focused on commemoration, connection and celebration. The “three C’s” dovetail with Ohabei Shalom’s commitment to honor the past, appreciate the present and stay mindful of the future.

Rabbi Berkman observed that in planning the festive year there was “an understanding of the layers of history upon which we stand is an important part of building for the future. We embody knowing where we came from to move forward in the present and into the future.” 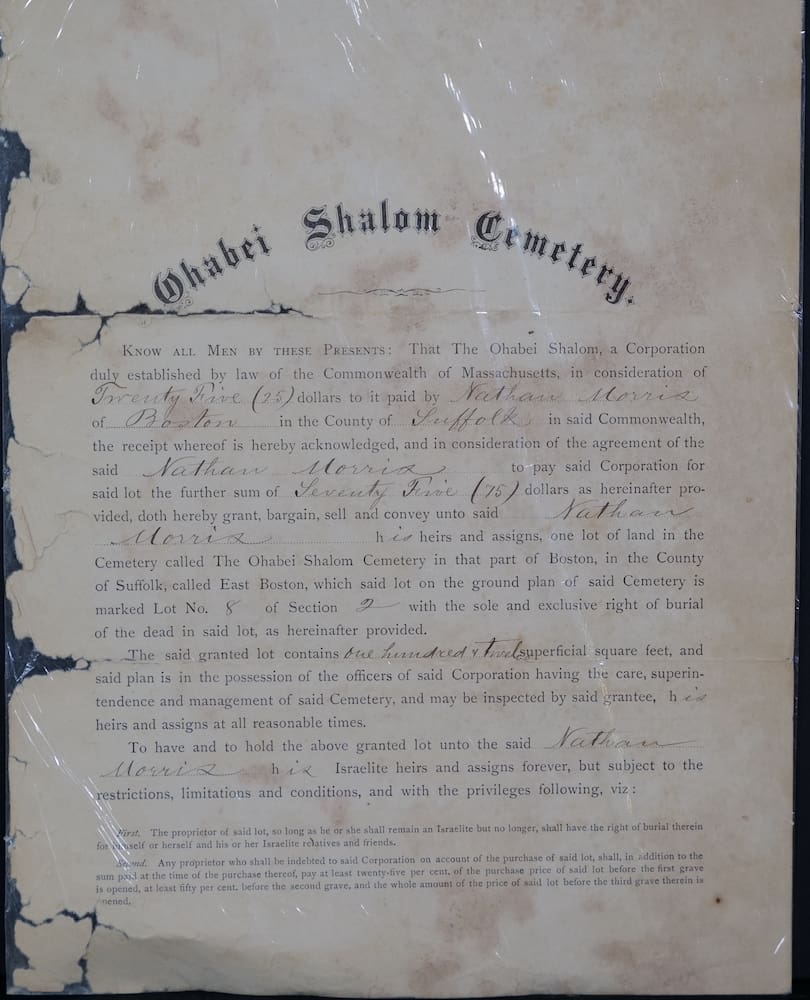 Green and Berkman pointed to two tree planting events last spring and fall in East Boston that emphasized the tikkun olam, or social justice, aspect of the anniversary’s programming. East Boston is the site of Ohabei Shalom’s cemetery, which was founded in 1844, making it the first Jewish cemetery in the state. Although the cemetery is no longer under the temple’s aegis, the symbolism of planting trees in what has been sacred Jewish land for almost 200 years connects with what Jewish tradition has to say about trees in planning for future generations. The importance of such planning is reflected in a tale that says if one is planting a tree and the Messiah is coming, the planting must be completed.

Green, who organized the tree planting ceremonies last April and October, said these events are part of Ohabei Shalom’s commitment to climate justice and contribute to its ongoing intergenerational legacy. “We had a wonderful Boston-based nonprofit, Speak for the Trees, that became a turnkey operation. I will follow up with CJP to help us coordinate with other congregations in the Boston area who might want to follow our lead and raise their congregations’ awareness of environmental issues through a Jewish lens. It was also fantastic to have [CJP president and CEO] Rabbi Marc Baker help us plant a symbolic total of 18 trees.” 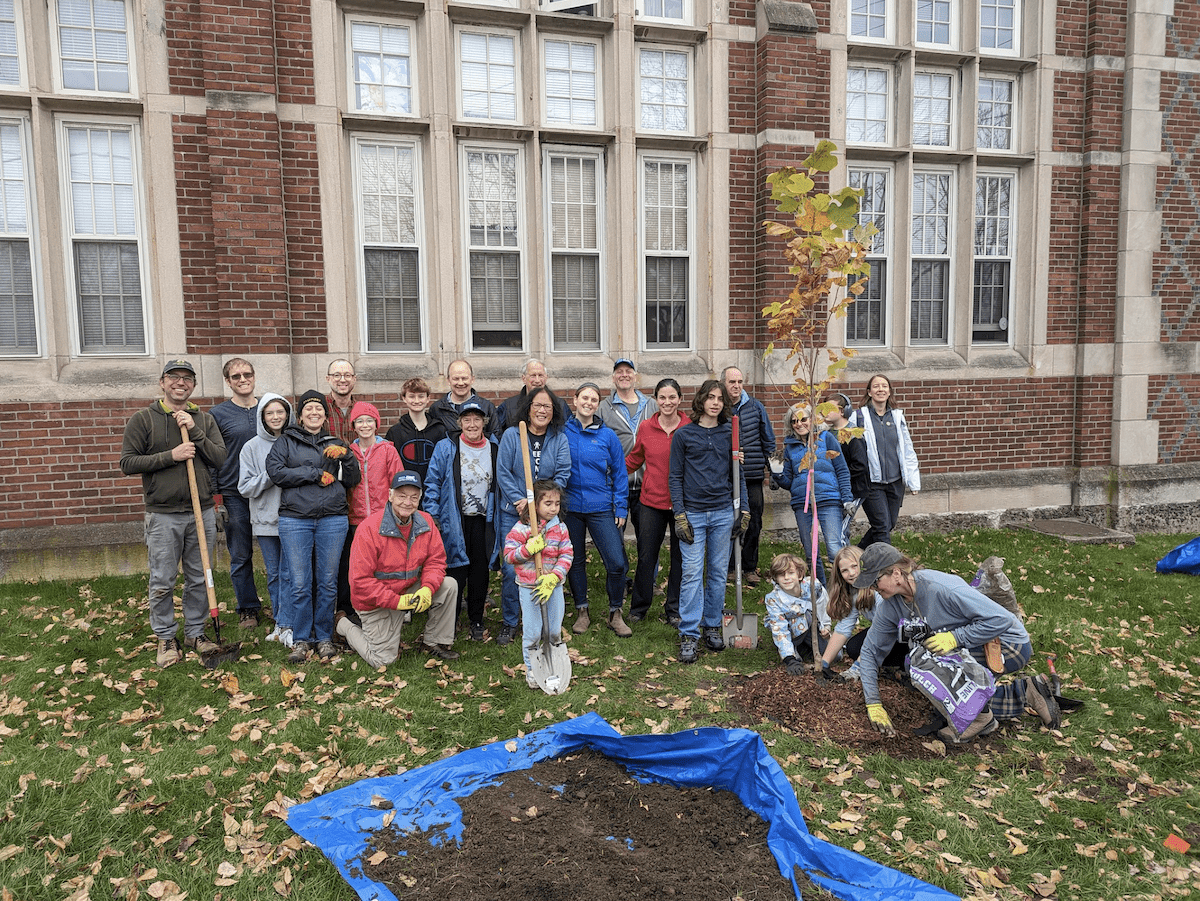 Music has also been central to Ohabei Shalom’s services for generations. Berkman noted that the congregation has kept abreast of Jewish liturgical music and synagogue music as it evolved over the years. “Music has been so important to our community in celebrating our history and our connection to it,” he said. “It’s yet another way that we’re embodying the value of knowing where we’ve come from and moving forward.”

An example of music’s primacy in Ohabei Shalom’s congregational culture is the recent formation of a band comprised of students from its religious school. Green said that music emphasizes the importance of coming together as an intergenerational community. During COVID-19, the congregation continued its monthly offering called Shabbat B’Yachad—Shabbat Together—over Zoom. The program is back in-person and approaching its original number of 200-plus people in attendance and 160 more households participating virtually. 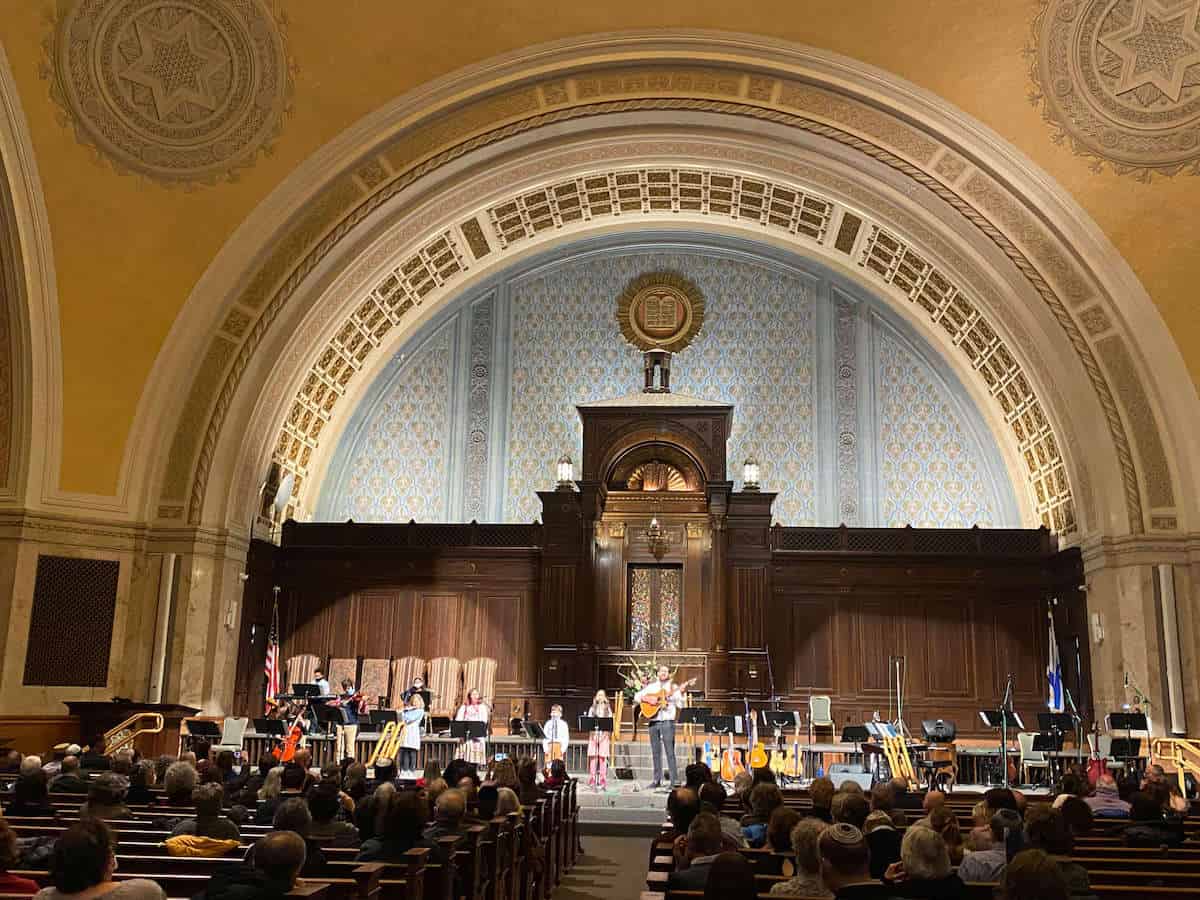 The temple’s culminating celebration was a concert in December that braided the ongoing themes of commemoration, connection and celebration with the ancillary concepts of past, present and future. “You could feel the energy fueling the music and vice versa,” said Berkman. “We planned to be in keeping with the themes of Hannukah, particularly that of rededication and renewal.” The Hanukkah concert also featured members of Nava Tehila, a musical group based in Jerusalem. Berkman and Green described them as a “prayer community that uplifts services with music and spirit.”

In another first, Ohabei Shalom was the first major congregation in the U.S. to be led by a woman. Rabbi Emily Lipof was installed in 1988 and was Ohabei Shalom’s senior rabbi for two decades. Other firsts for the temple have included its clergy performing the first same-sex Jewish marriage in Massachusetts in 2004, serving as an emergency shelter during the Boston Marathon bombing in 2013, and expanding its campus on Beacon Street in Brookline.

Berkman found meaning in the expansion. “Our physical building is a mix of the very old and very new. Our sanctuary was dedicated in 1928 and in 1994 we dedicated the Diane K. Trust Center for Early Education Building, which houses a pre-school serving children from 15 months to age 5,” she said. “Like our tree plantings, the building reflects our dedication to life-long learning and preparing our children for the future.”

During Ohabei Shalom’s continuous existence for almost two centuries, the temple accumulated a vast archive largely untouched until boxes of materials were discovered in an office corner. The boxes included handwritten board meeting notes from almost 100 years ago, programs for previous anniversary celebrations beginning in 1843 (including dinner menus) and paperwork for various mortgages taken out by the congregation over its long history. A temporary exhibition of these materials was mounted for the 180th anniversary, despite flooding in the building in June 2022. Once the space has been renovated there will be a more extensive exhibit at the temple and on the website’s upcoming redesign.

Building on the three C’s and the corollary of situating experiences in the past, present and future, Berkman shared a teaching in keeping with her observation that “the nature of successful Jewish communities is that we’re in touch with the past and therefore understanding where we’ve come from and the fact that we are part of a chain extending into the future. This chain is an example of l’dor v’dor—from generation to generation—on individual and communal levels. I often teach about the significance of Hebrew names and how we are always someone’s ben or bat—son or daughter. That extends to prayer—as our central prayer, the Amida, begins with introducing ourselves as the descendants of the patriarchs and matriarchs.”