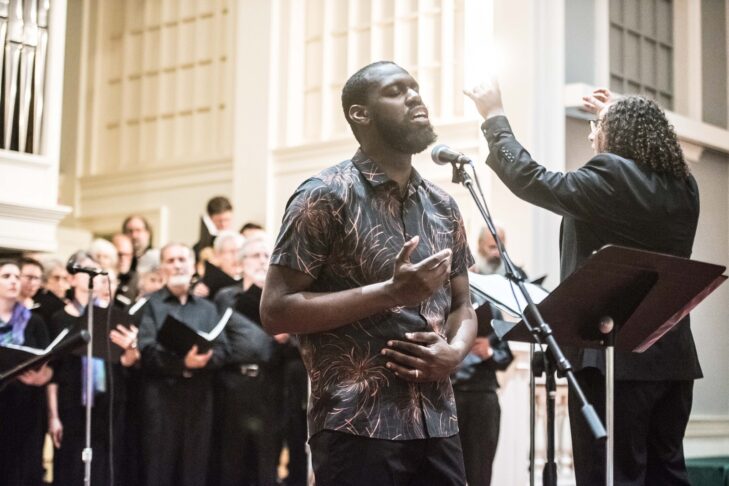 A year ago, many members of Boston’s A Besere Velt Yiddish community chorus logged onto Zoom for the first time in their lives. In just a few weeks, they’re doing what was once unthinkable for many of the singers: premiering an entirely virtual concert, “Singing For a Better World,” with international guest artist performances.

The social justice Yiddish concert was pulled together in an impressive feat of perseverance, online collaboration and a little bit of luck. The intergenerational group of singers includes a retired stage manager, a logistically-oriented lawyer, organizers and activists, social workers brimming with emotional intelligence, teachers adapting to Zoom, a young adult working on becoming a transcriptionist and an award-winning documentary film editor.

Founded in 1997 as part of Boston Workers Circle, A Besere Velt calls itself “the largest Yiddish chorus in the universe,” and in a typical year has about 90 members. At the beginning of the pandemic, there was a noticeable drop in the number of singers. For some, the doubts and difficulties of making a chorus work virtually were too daunting.

For those who stayed, they found a newfound determination in holding the choral community together, moving forward through song and sharing this inspiration back out. As one choir member put it, “We are desperate for a better world.”

Conductor Derek David experimented with teaching new songs and harmonies virtually. While the chorus missed being together in person, a silver lining emerged: the erasure of geography. Without the limitations of plane rides and hotel expenses, worldwide collaboration with other renowned Yiddish performers opened up immensely. The upcoming concert features Polina Shepherd and Lorin Sklamberg in the United Kingdom, Daniel Kahn in Germany and Anthony Russell and Judy Bressler in the U.S.

“Singing For a Better World” is grounded in progressive, secular Jewish history and support of workers’ rights and immigrants’ rights, along with traditional Yiddish folk music. There is also a focus on racial justice, with performances that combine Yiddish songs of freedom and Black songs of freedom.

At its core, the chorus and concert touch on the power of joining voices together in unity. In the concert trailer, they sing “Un Du Akerst,” a song asking workers to recognize their power. Overlaid on the harmonies are both archival photos and present-day protest photos of BWC’s shule (Sunday school) students. The concert is honoring the BWC Shule Class of 2019 for advocating and organizing for a gender-inclusive name for Boston Workers Circle.

A Besere Velt chorus is a pillar within the BWC community. The BWC of today is a Jewish culture and social justice organization deeply connected to the idea of “roots, resistance and resilience.” In recent years, BWC has been involved with community-building, Jewish Muslim solidarity work, immigrant sanctuary work, Yiddish language learning and multigenerational education. The chorus interweaves these silos through song and incorporates the long history of workers’ rights into their performances.

As longtime member Linda Gritz describes, performing with the chorus is “expressing your Jewishness and your social justice in the same breath.”

A Besere Velt and guest artists are broadcasting their concert “Singing For a Better World” virtually on Saturday, May 15, at 7 p.m. EDT. Ticket prices are sliding scale, ranging from $18- $108, and can be purchased online at circleboston.org/abetterworld.