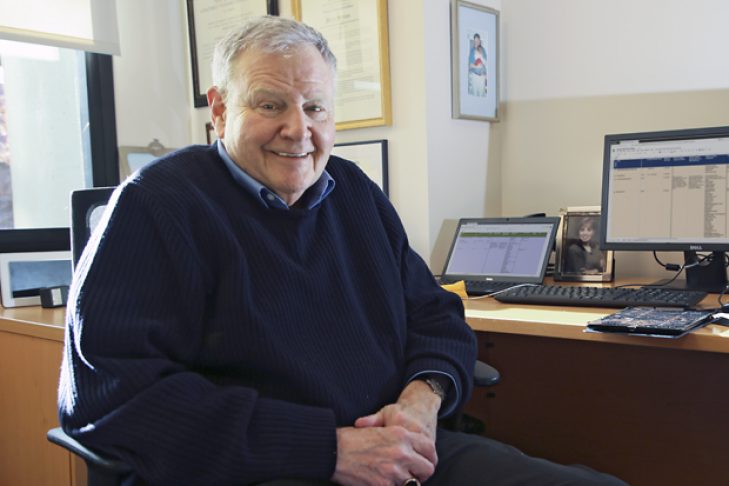 Barry Shrage has a few big ideas about how to strengthen the Jewish identity of American Jews.

For 30 years, Shrage served as president of Combined Jewish Philanthropies of Greater Boston (CJP), developing new programs to connect Jews to Israel, each other, and their tradition, heritage and faith.

In September, he became head of Brandeis’ new Initiative for Jewish Identity (IJI), a research center where academic leaders will come together with people who’ve been working in the field to understand Jewish identity in new and creative ways.

IJI, which is housed at the Cohen Center for Modern Jewish Studies/Steinhardt Social Research Institute, will put a special emphasis on reaching out to younger Jews.

BrandeisNOW interviewed Shrage, now a professor of the practice at the Hornstein Jewish Professional Leadership Program, about his plans for the IJI.

What’s the mission of the IJI?

We’ll be testing our ideas through research and by putting them into practice. In some cases, we’ll be developing new programs. In other cases, it’s about taking programs that already exist and figuring out how they can become more widely used.

Ultimately, it’s about instilling a relationship of love and a deeper understanding of the community, culture, learning and spirituality that tie us to our fellow Jews, Israel and all humankind.

Yes, it’s complicated. Is it an ethnic group? A comprehensive knowledge of Jewish history, religion, culture and tradition? Or a feeling of profound ties to the land of Israel? Or is it something even deeper, a spiritual connection to the Jewish faith and God of Israel? It may be all of these, some of them or even none. Still, this connection that we have to each other is very powerful.

And you’re talking about ways of strengthening that connection, whatever it’s based on?

The key question is: How do we open a door so that our children and our grandchildren can become as deeply engaged in Judaism as they want? It’s about showing them that Judaism offers a certain kind of meaning, purpose, identity that most of us want to have.

We aren’t lost. But we need to work harder, more creatively and with more passion and commitment. We need a multi-level strategy.

On the other hand, the kid comes home from public school and says, “Mom, Dad, they’re teaching me a new play. They say it’s in English, but I don’t understand a word.” And the parent says, “That’s Shakespeare! It’s filled with wisdom and knowledge and beauty, and it’s worth finding out more about.”

What I’m saying is that when parents have no interest in transmitting the values of Jewish learning to their children, it doesn’t work.

What can be done about that?

When I was at CJP, we learned about the success of the Wexner Heritage Program. The program recruited several dozen promising leaders in communities across the country. Its goal was to teach leadership skills. But what it really did was introduce a whole generation of young Jewish adults to amazing Jewish teachers and scholars and inspire a profound love of Jewish learning.

So I said, “Okay, let’s replicate this at every synagogue in Boston.” And over time we had 4,000 people taking this course. When you put it out there, it was extremely popular and they loved it.

I’m saying that if you can begin to create an intellectual environment, a zeitgeist where adults care about Jewish learning, then it’ll get passed on to the children.

You can’t pretend that kids are going to have a quality encounter with Judaism in most Hebrew schools. It’s just not going to happen.

There are kids at Hebrew school who like it, but they’re a minority and not usually the leaders. But at summer camp, the best-looking lifeguard in the place is also chanting Torah on Shabbat. They’re the ones everyone admires.

And what about Birthright Israel?

Extensive research at the Cohen Center has shown that it has a remarkable impact. Young adults come back with a stronger Jewish identity and a stronger connection to the Jewish people.

For three or four days of the bus trip, there are Israeli soldiers there, not dressed as soldiers, just as ordinary Israelis. The Israelis have made life or death decisions about their military service, decisions that the American Jews have never had to make, so this becomes an existential encounter. It’s a life-changing experience.

People have been talking about strengthening Jewish identity in this country for decades. You really think you can succeed?

Yes. I think we can succeed. Brandeis can make a difference. Jews are experts in building community, experts in what it means to be part of a worldwide people. And we are experts in teaching values and meaning and purpose. We can do this. We must do this.