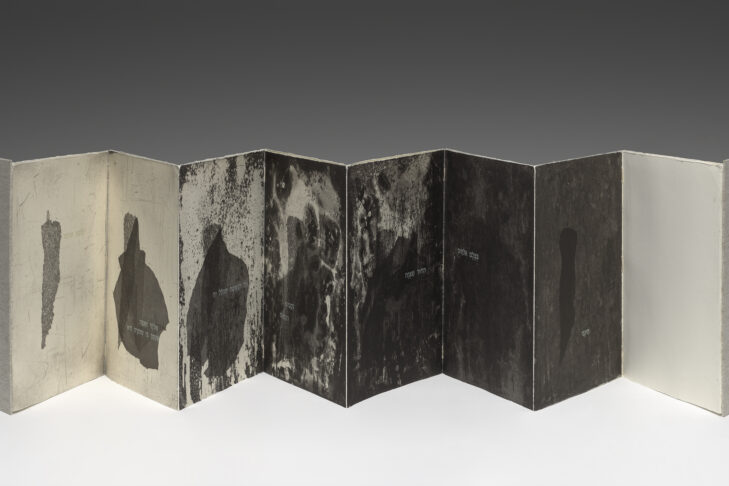 “Here, there are objects that stop time…silent for a moment…then cycle again and again. You will touch the eternal world and share connections. Step through to explore and reimagine.”
—Deborah Feinstein, chair, Hebrew College Arts Committee and curator, “Remember. Renew. Reimagine.”

“What this centennial exhibit does so well is to look across time and put diverse artists into dialogue with one another. Contemporary voices and works from the collection interweave because Hebrew College is so powerfully engaging with creativity and culture,” says artist Joshua Meyer, a member of the Hebrew College Arts Committee, whose work is in the show. “The Arts Initiative is encouraging us to build not only a visual language, but a community that wrestles with tradition, building a multi-vocal, visual conversation. We artists remember, renew, and reimagine—discussing Torah across generations.”

The artists’ works center around the three thematic categories: “Remember,” “Renew,” and “Reimagine.” They include visual extensions of the Jewish interpretive tradition of sacred texts, called Midrash, as well as artistic interpretations of the religious search for meaning. Together, Feinstein says, the paintings, sculptures, collages, and drawings enable the visitor to “look deeper into the complexities around us, the mysteries, and the necessity for repair” and “witness what is written in Torah and what is left unsaid.”

“Here, many voices evoke images, expressions, and thoughts inspired by the Torah,” Feinstein says. “There are encounters with narratives that transcend time and space. The relationship between the context, viewer, and artist trigger memories, traumas, and joys. Generations of stories are remembered, decoded, and illuminated.”

Contemporary artists in the exhibition:

Select artists in the exhibition reflect on their works:

“My paintings have been circling two themes: time and light. Light is about seeing and trying to understand. Time is about how we change—questioning whether art canhold multiple, competing truths. Each daub of paint holds a memory, and when they overlap, you can see time elapse. Chanukah is the convergence of these two themes, marking the passing of time with light. I’m exhibiting an excerpt from ‘Eight Approaches,’ a sequence of eight paintings hung in a row. This giant, almost-but-not-quite chanukiah is really about the spaces in between the paintings and the spaces in between people and ideas.” 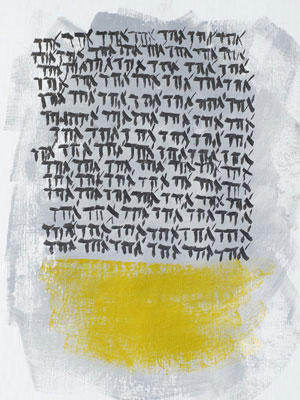 “My art most often has been informed by my ongoing relationship to the Torah, as I’ve been swimming in the letters and words of the Torah for many years, including numerous classes at Hebrew College. I often find myself in a visual conversation with our mysterious ancient text as I paint from the inside out. My art is perhaps a visual midrash of sorts, exploring ideas such as creation, separateness, oneness, and the creation of the world with the letters. My hope is that my paintings might be seen as both universal and, in particular, as simple pieces of beauty, touching the mystery within all of us, yet also having meanings that can resonate in different ways with different viewers. I also honor the tradition of consciously creating nonrepresentational art, following a particular interpretation of the Torah’s prohibition of making images.” 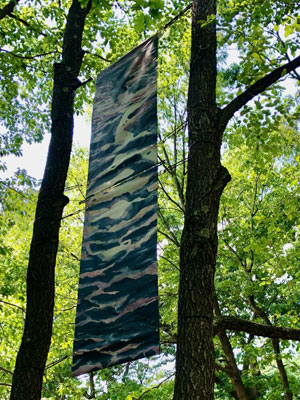 “’Roll into Day/Roll into Night,’ a chant we sing in temple on Shabbat, moved me to create paintings about the beauty of earth and creation. This work is based on two photographs of the sun setting and the moon rising—the sun is painted on one side and the moon is painted on the other side. In Genesis, we read that in the beginning, God created the heavens and the earth out of darkness, separating the darkness from the light, and he called it good. Here, the light serves as a metaphor for hope, as we leave COVID and move forward together.

“During COVID, I began to paint a series which I call ‘Hello Earth,’ initially inspired by satellite photos of the earth from space by astronaut Chris Hadfield. Many of these images are based on micro closeups of leaves, plants, and water reflecting the beauty, colors, light, and compositions within these images. These paintings reflect my concerns for our planet and the environment—the air pollution, destruction of forest, climate change, a call to awareness to save our beautiful planet. In times of stress, it is comforting to immerse in the beauty of nature. Painting these compositions is my way of sharing this beauty with others.”

“As a newlywed, I took on the ritual of immersion as a way to mark the end of separation, Niddah, between a husband and wife that takes place during a woman’s menstrual cycle. Immersion became an inspiration for a series of prints that explore immersion and purity. Using etching techniques and acid as the ritualistic ‘water,’ I created seven distinct abstract copper plates to represent the seven intentions a woman must have to prepare herself to make the transition from impure to pure. During a Niddah immersion, a woman dips in the water three times. I dipped the copper plates in acid three times. Some of the plates became so destroyed by the acid that the entire surface became concealed. Using black ink, I printed the images on white paper and attached the prints together to create a double-sided accordion book that incorporates special Hebrew and English text, based on the intentions.”