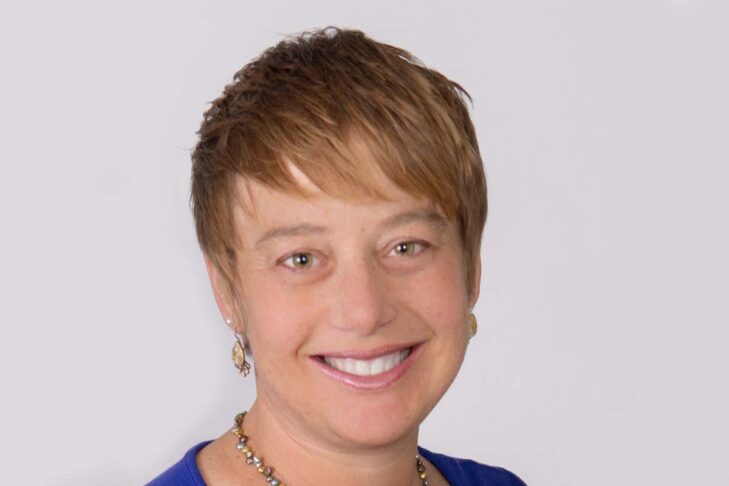 Idit Klein, executive director of Keshet: For LGBTQ Equality in Jewish Life, will be celebrated for 20 years of innovative leadership at the organization’s annual OUTstanding! event on Tuesday, Nov. 16. In Keshet’s earliest incarnation in the late 1990s, Klein arrived as a volunteer activist. But as she points out, she built the organization from the ground floor and took on a leadership role within the group in those first years.

Five years later, in 2001, Klein became Keshet’s first full-time salaried employee and began growing the organization in earnest. She worked solo for over a year with an initial budget of $45,000 that by 2012 grew to $2 million. The staff of one expanded to 12 full-time employees.

Klein’s social activism within the Jewish and LGBTQ communities began when she was a student at Yale University. She came out her senior year of college and intended to bring together her Hillel and LGBTQ social circles. “I was someone who had always felt at home in the Jewish world and did not doubt for a millisecond that I would continue to feel at home and have a continued sense of belonging,” she recently told JewishBoston.

It was the early 1990s, and Klein quickly felt that her two worlds—the LGB co-op on campus and her community at Hillel—were at odds. That feeling grew as Klein navigated the two groups. “I learned that no one else in leadership in the Jewish community at Yale had ever come out,” she said. “I was also meeting a lot of Jews at the co-op who were astonished that I was involved in Yale’s Jewish community. For many, this was about assumptions they made in the absence of proactive messaging that they would be embraced and affirmed within the Jewish community.”

Rabbi Sharon Cohen Anisfeld, president of Hebrew College, was Yale’s Hillel director at the time. With Cohen Anisfeld’s support, Klein organized the first-ever co-sponsored events on campus between Hillel and the LGB co-op. “Back then,” said Klein, ”I never dreamed that I would turn that unique campus activism into a career. Becoming a professional queer Jew was not an option available to me at Yale University.”

However, after bringing together fellow Jews and co-op members, she knew she had found her calling. Klein, who was born in Tel Aviv and moved with her family to New Bedford, Massachusetts, when she was 2, moved to Israel after college for three years. Upon her return to the Boston area, she earned a master’s degree in social justice education at the University of Massachusetts-Amherst. She was also in the inaugural fellowship cohort of the Jewish Organizing Initiative (JOI) in 1998.

“The JOI fellowship was instrumental and enabled me to bring community organizing and a more strategic approach to the work at Keshet,” she said. As a result, by 2001 Klein and others understood that Keshet had to transition from an all-volunteer effort to a nonprofit organization. “It was clear,” Klein said, “that this was an organization that had the potential to have a meaningful impact on the Jewish community of Greater Boston, which at the time was our geographical scope.”

In the early years, Klein described the Jewish community’s reception to her work as one of “mostly bewilderment.” She added: “LGBTQ issues were not on most people’s radar. In general, the Jewish communal imagination did not encompass thinking about Jewish queer people and the queer experience.”

The atmosphere of those early days of advocacy for the Jewish LGBTQ community has shifted significantly due to Klein’s unsurpassed dedication. In keeping with her belief that leaders must follow where the people take them, Klein saw that Jewish LGBTQ people were hungry to connect with other queer Jews. “They were looking for community, for romantic partners, and they looked to Keshet to provide it,” she said. “Our first significant project in December 2001 was an LGBTQ Jewish speed dating event and 85 people showed up.”

It was also a time when Klein clearly “heard the pain in people’s voices of feeling disenfranchised from Jewish life.” Over time, that disenfranchisement led to the first stirrings of educational training and advocacy work in Jewish queer-affirming spaces. Klein said many people began to feel “they had a place in the world and were entitled to push this world to be better than it is.”

Klein initially reached out to Jewish institutions, synagogues and Jewish day schools. Keshet was also intentional about supporting queer Jewish youth. That move resulted in working with Gann Academy, then known as the New Jewish High School, to help the school establish a Gay-Straight Alliance. The venture was chronicled in a film called “Hineini: Coming Out in a Jewish High School.” Hineini is the Hebrew for “Here I am.” Klein and Keshet were listed as the film’s executive producers.

The film’s 2005 release ushered in an era of growth during which Keshet rolled out its work nationally. “That’s when we declared we had something to give beyond the confines of Greater Boston,” Klein said. “We transitioned from a Boston-based board to a national one. We attracted a significant infusion of funding from national foundations, taking the work to another level.”

Yet a significant challenge remained for Klein and her staff regarding the “B” and “T” in LGBTQ. “We heard over and over from various Jewish spaces that ‘bisexuality was confusing and we’re not ready for transgender,’” she said. “These days, every institution is interested in training that encompasses gender identity and gender diversity, so that has been a big change.”

Among the challenges Klein and her allies still face in their work is guaranteeing that LGBTQ issues are part of a community’s social justice agenda. “Doing this work within the Jewish community, we’ve found that many institutions feel good about being tolerant,” she said. “They’ll say they are welcoming. But feeling tolerated is not anyone’s goal, and that’s a conversation we’ve had many times. There is still a gap between a place of basic tolerance and basic inclusion, and being a community where people feel celebrated and a sense of belonging.”

As for the future, Klein looks forward to expanding Keshet’s reach to significant Jewish populations in places that have been historically regressive when it comes to legislating LGBTQ rights. She also aims to increase the scope of Keshet’s ongoing work on racial equality and representation in the organization’s staff, board and programming. “I’m committed to being an organization that is representative of the diversity of Jewish life, bringing an intersectional lens to all of our work through an increased focus on racial equity and justice,” she said. “We’re working with queer Jewish youth of color and adult queer Jews of color, and we’ve received a tremendous response.”

As for Klein’s long-term vision for Keshet, she said she eagerly anticipates the day when Keshet closes its doors because the work has been completed and the mission has been achieved. “I can’t say when we’ll get there, but I feel entirely sure that we will,” she said. “That’s what we’re working toward.”