On Erev Super Bowl Sunday, over 500 people gathered at the Royal Sonesta Boston for the fifth annual Chai in the Hub. It was the largest turnout this CJP event has ever seen, all to honor 10 of Boston’s inspiring young adults. Despite just having reached my one-year work anniversary, this was my first time volunteering at a CJP event. Two-and-a-half years of retail training prepared me for the few hours I spent saying “hello” while directing traffic at the base of the stairs.

Attendees ranging from honorees and their families and friends to young adult community members and organization reps mingled over cocktails, hors d’oeuvres and tiny gâteaux. Everyone was then ushered into a grand, theater-esque room for the program. (Where there were more snacks!)

The program itself kicked off with opening remarks from Chai Society chairs Alexis Isenberg and Joshua Kay. Framing their comments were video interviews with the honorees, showcasing each individual’s “dedication to tikkun olam,” as Isenberg so perfectly put it, and detailing why each are, according to Kay, held in “chai regard” (videos below). The two chairs were very welcoming, even with the “chai” number of puns Kay knew he was making (met with jeers from all, including himself).

So, to quote Kay, “Let’s not curb the progress” of this recap.

“It takes time, courage and sacrifice to act on your beliefs.” 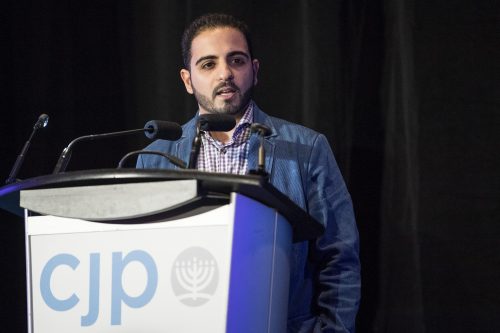 With a fun demeanor and jokes about snow, Aseel Sharif shared his story about immigrating to the U.S. from Iraq in December 2008. Now a career coach at Jewish Vocational Service (JVS), he helps refugees and immigrants find jobs. His message was a clear one: In the midst of all the rising hate speech in this country, people need to rise above.

“We will never allow the expulsion of immigrants because we will never forget where we came from.” 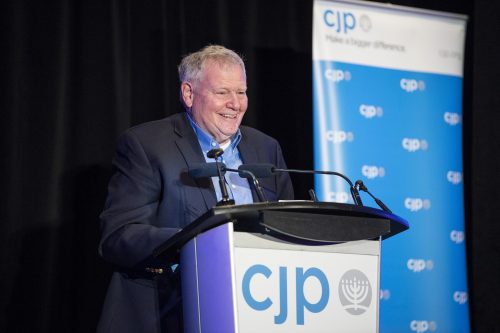 CJP president Barry Shrage followed Sharif’s impassioned speech with one of his own: “JVS is what the Statue of Liberty represents…welcoming the stranger is the reason we are alive as a community today.”

Calling Jews a 3,500-year-old people who have been the stranger, he promised he would not let immigrants suffer. Fueled by passion and truth, Shrage repeated, “We would not let it happen, not let it happen.” He also mentioned steps the community is taking to guarantee this promise, including the CJP Legal Aid Fund for Immigrants, a partnership with Catholic Charities to fund the latter’s immigration legal services.

He ended his last-time-as-CJP-president Chai in the Hub address with, “Have a great evening—never forget who you are.”

“If God had wanted me to go camping, she wouldn’t have invented the Ritz-Carlton Hotel.” 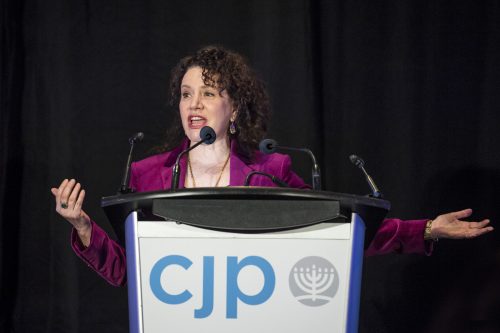 Susie Essman (“Broad City,” “Curb Your Enthusiasm”) is not one to be confined to speaking behind a podium. About five minutes into her first bit about where her characters’ anger comes from (“Isn’t everybody f#!@ing angry, or is it just me?”), she grabbed a handheld mic and began to pace around the stage.

Topics ranged from her parents, her husband and their interfaith family to loud women, her cousin (who “sounds like a cross between Kermit the Frog and Julia Child”) and various vocal impersonations.

“Sleep-away camp was the first place I did everything.” 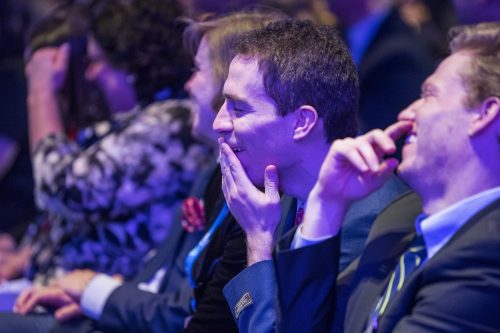 Essman, the Jewish partner in an interfaith marriage, feels compelled to teach her family about shiva (food is necessary, as is having a great funeral) and calls “bulls&%t” on sleep-away camps that don’t do a musical or have a color war.

“I talk really fast; can you keep up?” 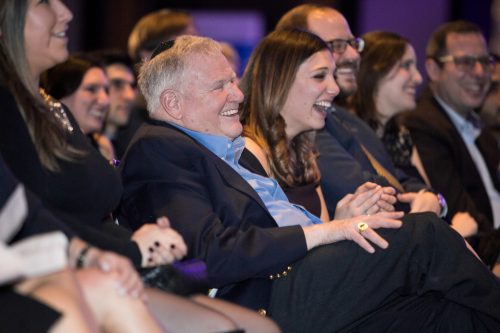 At some point, Essman checked in with the ASL interpreter standing below her. “What if I started to talk in Yiddish? Mishpochah.” The interpreter, who had been keeping pace all evening, signed “family.”

Want more of Susie’s irreverent and candid brand of humor? 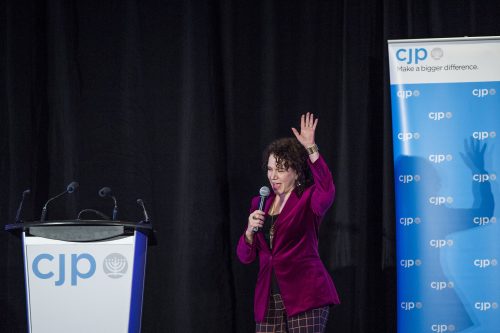 Catch her on HBO’s “Curb Your Enthusiasm” or Comedy Central’s “Broad City.” We’ve also heard her 2009 book, “What Would Susie Say?: Bullsh*t Wisdom About Love, Life and Comedy,” is hilarious!