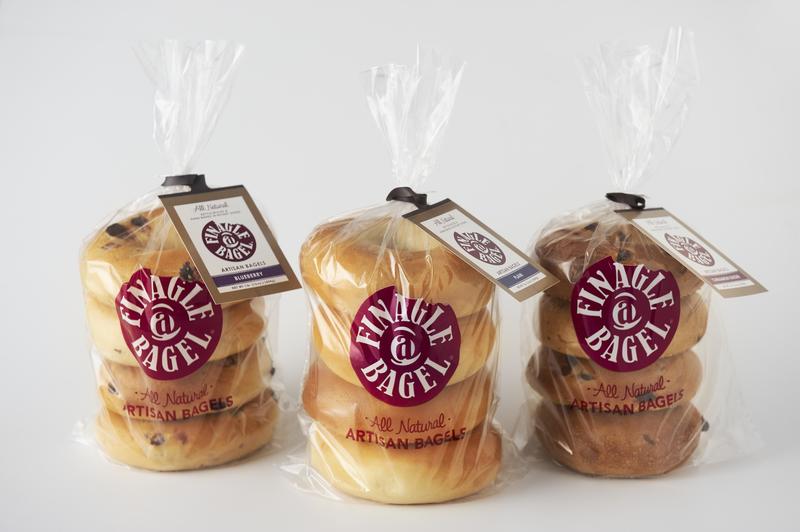 Finagle a Bagel’s baked goods are carried in thousands of grocery and superstores in 27 states, and the company once operated as many as 20 retail stores. On paper, it sounds like another faceless corporation. In reality, it’s a family-owned, small-scale company more akin to a neighborhood bakery.

The Newton-based company is a small operation with a big reach—and owner Laura Trust likes it that way. Trust invited me and a couple other JewishBoston.com staffers to come visit the recently redesigned, kosher-certified headquarters in Auburndale.

“Our reputation is bigger than we are,” she said, as we gathered in one of the conference rooms before starting the tour.

The big-name reputation is a holdover from the early 2000s, when the company was at its height. She and her husband, Alan Litchman, bought Finagle in 1998 and grew it for the next decade. In 2008, things were going so well that they were considering franchising the brand. But the recession changed their plans. Instead, they entered the wholesale market.

Since then, their wholesale business has soared while their retail stores have decreased in number. (Most recently, they lost the lease on their location in Center Plaza, where the store had been for 22 years.)

But Trust knows it’s just part of the company’s trajectory. Finagle has its sights set on opening more shops, and she noticeably lights up when she talks about one of the company’s latest projects: a kosher café, due to open in May, that will be adjacent to the Auburndale headquarters. She envisions it as a destination where people will linger over their bagels instead of simply popping in for carryout.

As we spoke, Trust’s young son, Jake, who was off from school for Veterans Day, was splitting his time between her office and his dad’s, located just down the hall. Jake occasionally politely interrupted our conversation the way kids do, with a quick question or just to give his mom a hug. At one point he came in to report that Scraps, the family dog who roams the office freely, had eaten his bagel. Each time, Laura stopped mid-sentence and turned her attention to her son, then picked up our conversation without skipping a beat.

When the topic of catering came up, Trust held up a cell phone and said: “Sure, we have a catering line. This is it.” If you call to place an order, you’ll either talk to her—the president of the company—or Susan Gould, director of operations and culinary arts, depending on who happens to have the phone on her that day.

That closeness is a recurring theme in Finagle’s operation. The front office at Finagle a Bagel is only seven people big, including Trust, Litchman and Gould, who has been at the company for more than 15 years. She started as a new-employee trainer at one of the retail shops and worked her way through several positions. Now, her responsibilities include bakery operations, product development and quality assurance. In short, she develops new recipes—like the drool-worthy bialys the company recently started selling—and makes sure the current products stay up to the company’s standards.

And Gould isn’t the only employee who’s been with the company for more than a decade. Many people in the front office and on the production line have been in the Finagle family for years. Nilton, the head baker and fastest challah-braider in town, has worked there for 19 years. When Trust says the company is family-run, she means both biological and chosen.

The small-scale processes are most on display in the production of their bagels. Many larger bagel chains take just hours to make their bagels; Finagle takes two days. Trust insists the extra investment in time and resources ensures they turn out only the highest-quality bagels. She then summed up her and Finagle’s philosophy: “This is the most inefficient, labor-intensive way to make a bagel,” she said with a laugh. “My professors from grad school at MIT would shake their heads in disapproval. But it makes a difference in the end.”

Check out photos of the bagel-making process below! 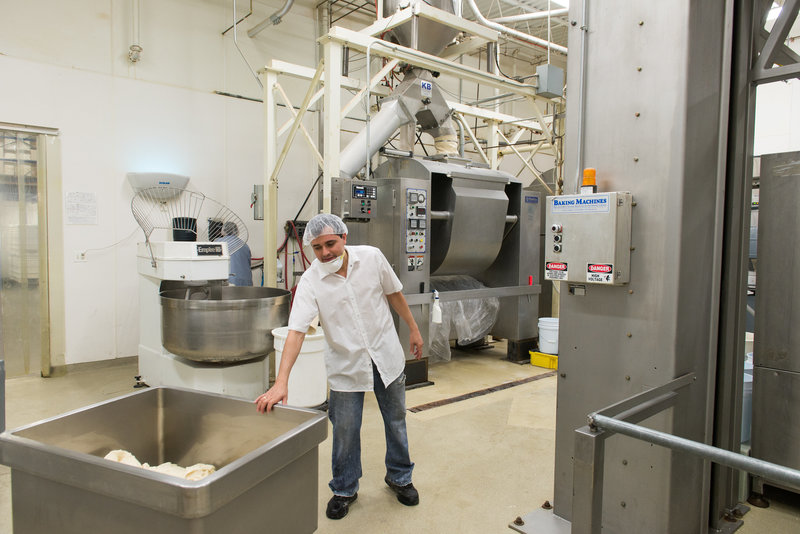 The dough—which includes only all-natural ingredients—has just been mixed and is on its way to the portioning and shaping machines. Besides the high-protein flour, every ingredient is measured by hand. (Photo credit: Jordyn Rozensky) 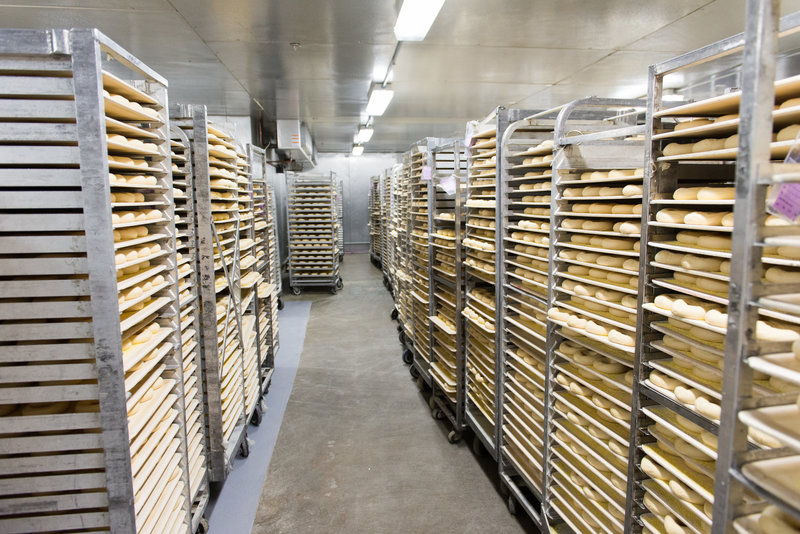 After being mixed and shaped, the uncooked bagels are stacked on speed racks and left to proof overnight. (Photo credit: Jordyn Rozensky) 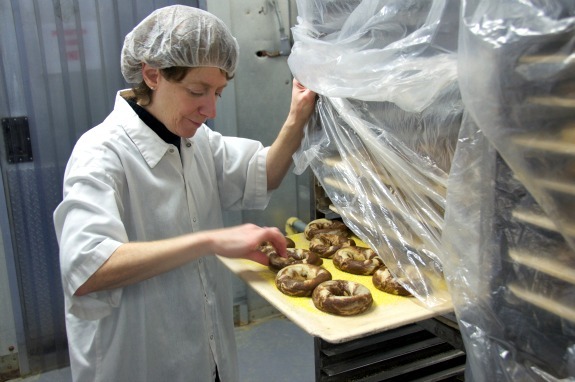 Finagle a Bagel president Laura Trust inspects marble bagels in the proofing chamber. “The mixers and bakers are the most skilled jobs in the company,” Trust said. “It’s an art form. They have to know how the dough should feel, whether it’s too wet or dry or if the moisture that day is making the dough a certain way.” (Photo credit: Jordyn Rozensky) 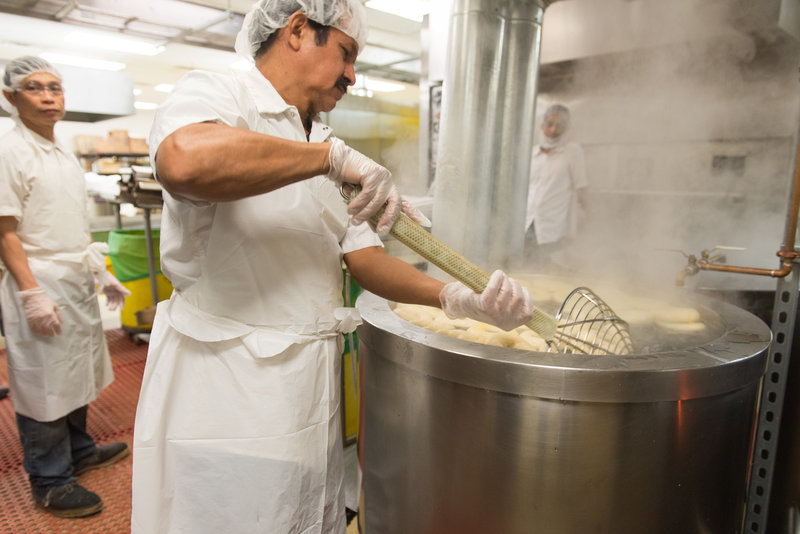 After proofing, the bagels are boiled in enormous kettles. (Photo credit: Jordyn Rozensky) 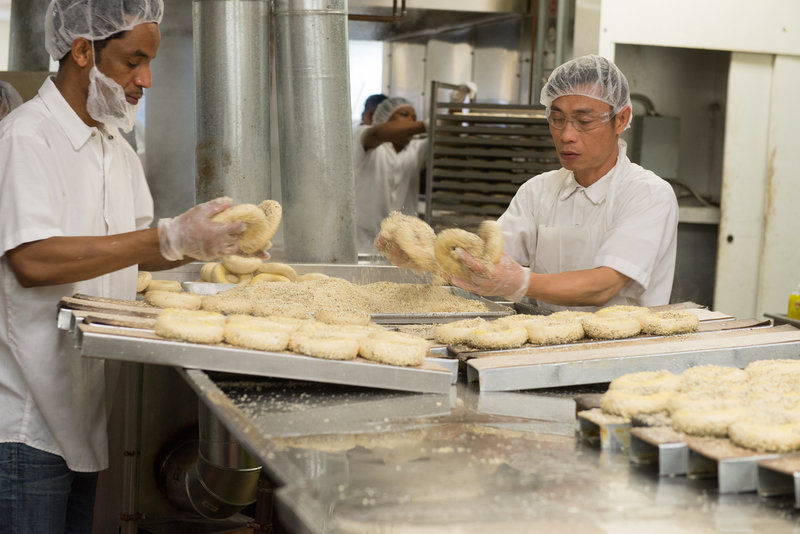 Each boiled bagel is hand-dipped in toppings. “This is the most inefficient, labor-intensive way to make a bagel,” Trust acknowledged, laughing. “But it makes a difference in the end.” (Photo credit: Jordyn Rozensky) 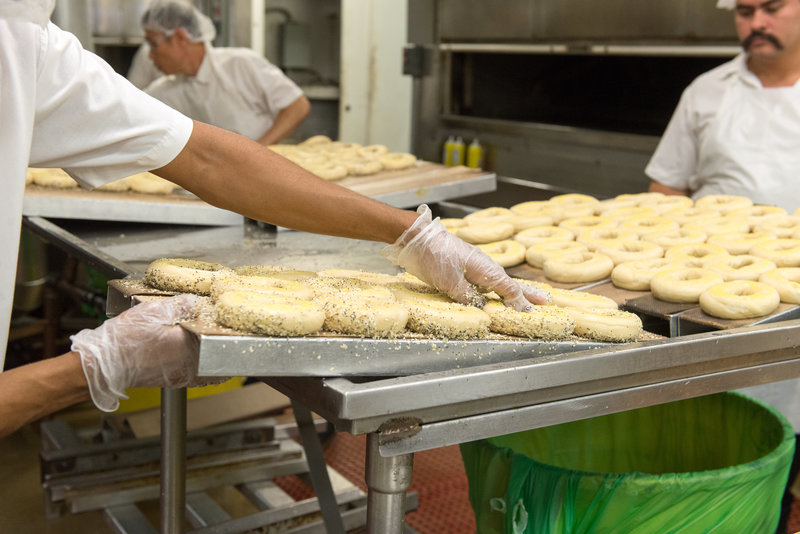 The boiled, coated bagels are placed on “bagel sticks” and transported to a rotary oven. The bagels are baked seeded-side down, then flipped halfway through baking. The bagel sticks prevent the wet bagels from sticking to the oven stones and give the bagels uniform roundness. (Photo credit: Jordyn Rozensky) 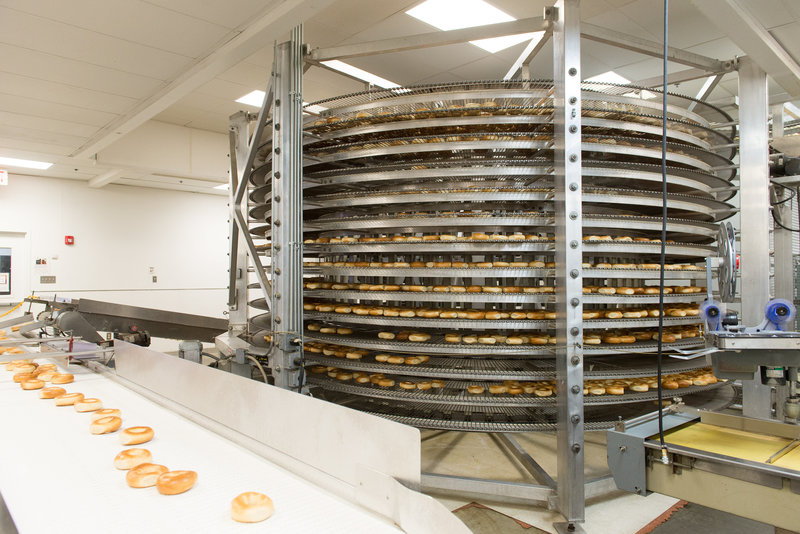 The baked bagels are transferred to a conveyer belt, on which they travel and cool off for 60 minutes, until they’re delivered to the packaging queue. (Photo credit: Jordyn Rozensky) 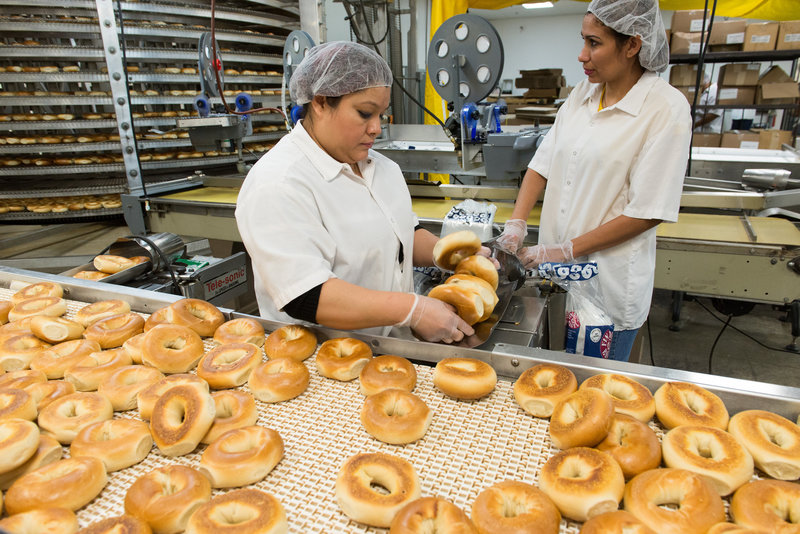 The bagels are packaged by hand. The facility can make as many as 100,000 bagels a day, depending on the size of the orders. Any bagel that doesn’t meet aesthetic standards gets donated to the Greater Boston Food Bank. (Photo credit: Jordyn Rozensky) 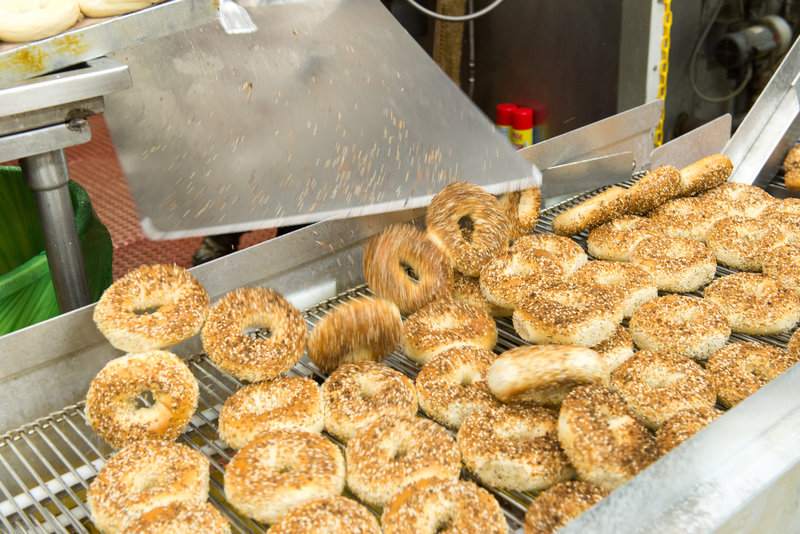 Finagle a Bagel owner and president Laura Trust and director of operations Susan Gould love all of the baked goods the facility produces, but Laura’s favorite is the jalapeno bagel with jalapeno cream cheese. (“I would put that cream cheese on a shoe.”) She also loves the garlic bagels, but considers them her “weekend bagel because you can’t really eat a garlic bagel and then go to work.” Gould, who has been with the company for almost 20 years, prefers a poppy seed bagel with butter. Both women also highly recommend the bialy, toasted with butter. (Photo credit: Jordyn Rozensky)
Never miss the best stories and events! Get JewishBoston This Week.
Filed Under: