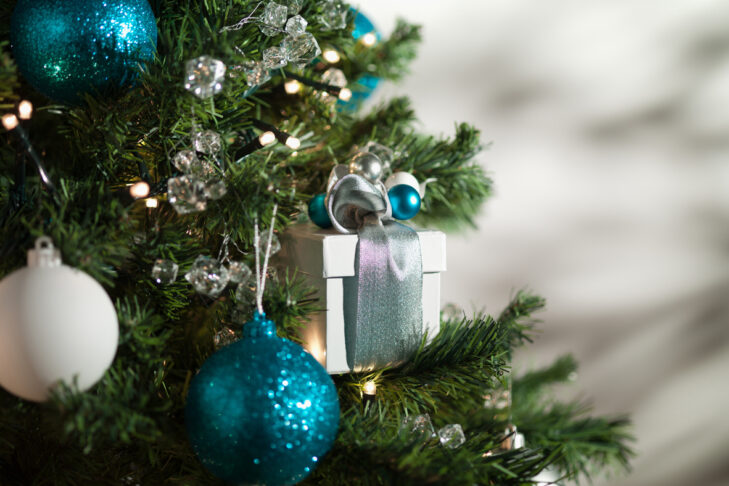 Louis Brandeis was well-known for becoming the first Jewish person appointed to the U.S. Supreme Court. So it may seem surprising that he celebrated the winter holidays with a Christmas tree in his home.

But being Jewish and decorating a tree wouldn’t have seemed remarkable to Brandeis. Christmas trees were common in the homes of secular American Jews at the time. What’s happened since then is more complex.

“In the late 19th century, there were quite a few liberal Jews—especially those from central European backgrounds—who had Christmas trees in their homes and saw them as secular symbols of the season,” Brandeis University professor Jonathan Sarna told BrandeisNOW.

Brandeis had a tree in his home when his daughters were young. “For him, this wasn’t an overtly Christian symbol. It was a way to take note of the holiday season,” said Sarna.

Born in 1856 to immigrants from the present-day Czech Republic, Brandeis was raised in a secular household. Many other Jewish Americans at the time shared Brandeis’s affinity for the trees, Sarna said.

“I think Jews who had Christmas trees did not really see them as Christian symbols,” he said. “At winter time a lit tree is beautiful and adds light during the shortest days of the year. It was a pretty way to commemorate the winter solstice or winter holidays.”

“Christmas isn’t even mentioned in the New Testament—trees were not necessarily ubiquitous at Christmas—so some Jews felt the trees were a symbol that could be shared by people of all faiths,” said Sarna.

The number of American Jewish households that brought Christmas trees into their homes declined toward the middle of the 20th century. By 1942, the number of Jews in America had climbed to 4.2 million, up from 1.5 million in 1900, strengthening traditional Judaism.

“And whereas in the 19th century, Jews who had Christmas trees viewed them in no way antithetical to Jewish religious attachments, we see a change in the 20th century.”

“The rise of the State of Israel, which saw itself as the heir to the Maccabees, led to a strengthening of Hanukkah as a holiday versus Christmas,” Sarna said. “Jews who viewed the Hanukkah menorah as their symbol certainly saw Hanukkah as part of Jewish nationalism and wanted to emphasize it against Christmas.”

Christian clergy and Jewish rabbis played a role as well. Sarna said rabbis across the spectrum viewed the Christmas tree as a symbol from which Jews should stand apart, while many Christian faith leaders opposed the idea of a secular Christmas and urged Jews not to put trees in their home, fearing that “Christ” would be taken out of Christmas, Sarna said.

While the number of Christmas trees in Jewish homes decreased in the 20th century, the emphasis on gift-giving grew.

Hanukkah, whose origin dates back to the Maccabean Wars of 160-167 CE, isn’t considered a Jewish high holiday and barely appears in the Talmud. But its celebration became more widespread thanks to its proximity on the calendar to Christmas.

Jews gave gifts of money when they celebrated Hanukkah in the 19th century—a tradition that continues today with gelt. But receiving presents became more mainstream at Hanukkah after Christmas became a national holiday in 1870, which led to the era of consumerism around the holiday that exists today.

“When Christmas became a national holiday, Jewish children felt discriminated against,” Sarna said. “Christian children received gifts and Jewish children felt left out. Parents took note, and there is no doubt the tradition of Hanukkah gifts, apart from gelt, was influenced by the surrounding culture of gift-giving at Christmas.”

In the last 40 years, Sarna says two specific groups have brought back the tradition of bringing Christmas trees into the home: Russian-speaking Jews and intermarried couples.

Christmas was banned as a religious holiday in the Soviet Union, but the tree remained a symbol of the new year. As such, Russian-speaking Jewish immigrants continue to see the tree as a secular symbol of winter.

Sarna said intermarried couples, where one partner is Christian, might have a Christmas tree as a matter of compromise. A 2013 Pew Survey found that 44% of Jewish people in an intact marriage are married to people who do not consider themselves Jewish. And in 2019, a study by the  Steinhardt Social Research Institute at Brandeis found that the majority of non-Jews who are married to someone who identifies as Jewish rarely observed religious traditions, except for Christmas.

“Lots of intermarried Jews find their non-Jewish spouses miss the Christmas tree and feel they can have a menorah and a tree as multiple symbols of the season,” Sarna said. “Some have them together or in separate rooms, but the use of Christmas trees—even in homes where a family doesn’t feel overtly Christian—might come from missing the tree and all that went along with it.”