Shalom from the Holy Land, where a near thirty OTZMAnikim and myself have been residing for the past few months. In less than one week, we will have called Karmi’el—an industrial city in the Western Galilee—home, for three months exactly. Not to retire the cliché, but time has more than flown by, and the cunning Mediterranean sun succeeds in prolonging the changing seasons, helping us lose track of the progressing calendar. Disappearing from the virtual realm for some time to gather my thoughts, I’ve traversed quite a few miles, been witness to momentous—and mildly troubling—times for this country, and pushed myself to get a little bit weird. 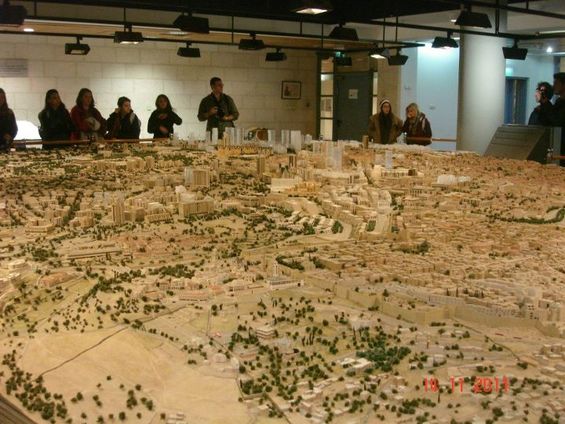 A miniature 3-D diagram of Jerusalem, @ the Jerusalem Municipality

This past Tuesday, OTZMA traveled to the Jerusalem for a guided tour into the Old City, where we perused not only the Jewish Quarter, but the Muslim and Christian Quarters as well, and learned about the level of coexistence of these three monotheistic religions within the very ancient walls.

Exploring Jerusalem as Israel’s capital city and the historical significance that the capital holds in the religions of Judaism, Islam, and Christianity, we visited David’s Tomb, the Western Wall, the Temple Mount, The Dome of the Rock, and the Church of the Holy Sepulchre.

There were a lot of hidden gems within the walls of the Old City we found memorable, such as Christ Church, a cathedral that displayed Hebrew characters and Stars of David on the walls and altar, with menorahs replacing crucifixes. A church that looked more accurately like a synagogue, this house of God was historically meant to convert curious Jews to Christianity. While it’s not today continuing to proselytize, the décor and layout of the cathedral continues to amaze many tourists and attract both practicing Jews and Christians. 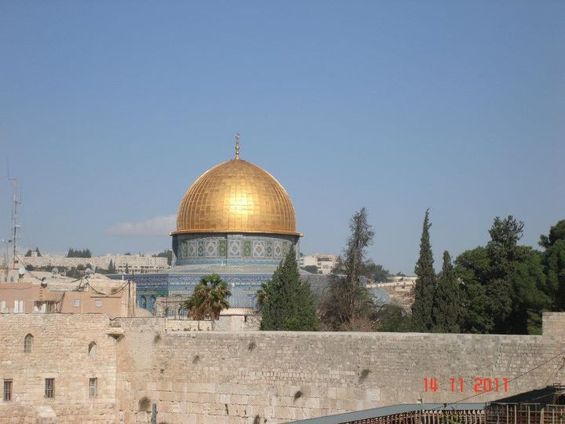 Temple Mount and Dome of the Rock, seen from the Western Wall

We walked down to the entrance of the Temple Mount, Israel’s first temple, which is across the green line and in the West Bank. It was the first time I walked upon Palestinian Territory, and the first time most of us had been to the Dome of the Rock, an Islamic shrine on the Temple Mount, easily recognizable as the large gold dome seen from the Western Wall. Whether we were tourists or Jews, I wasn’t sure, but the something in the air was different and we spent very limited time there. I wished we had devoted more of the day to learning more about the Dome of the Rock and Islam in general, but before we could begin to address our feelings of discomfort we were exiting the grounds, traversing back into the Old City through the Muslim Quarter, our nostrils tempted by the sickeningly sweet Arabic desserts and the pungent smell of Arabic coffee.

Walking through the Christian Quarter towards the Church of the Holy Sepulchre, I began to reflect on the powerful discourses that both divided and unified this holy, holy city. Albeit some of the Arabs within the Muslim Quarter weren’t exactly beaming at the flock of Jews or Christians present along the narrow corridors and the Orthodox Jews weren’t assisting the Christians in their carrying of the cross in participation of the “walk in the footsteps of Jesus,” The three peoples passed each other in the crowded shuk without angry banter or argumentative energy, amidst the overpriced shesh besh boards and cliché t-shirts.  Here, in the most holy place in the world, three religions reside in one community; the Mecca, if you will, of tension and uncannily incredible coexistence.

Since I haven’t written in a while, I unfortunately missed out on reporting of a lot of current events that have significantly changed much of the current course and energy of Israel and it’s people. Pivotal and eternally memorable events are passing all of us by day by day no matter the time zone or pinprick on the map, and I’m continuously amazed, humbled, and appreciative to be living and volunteering during a time and in a country that is making history. 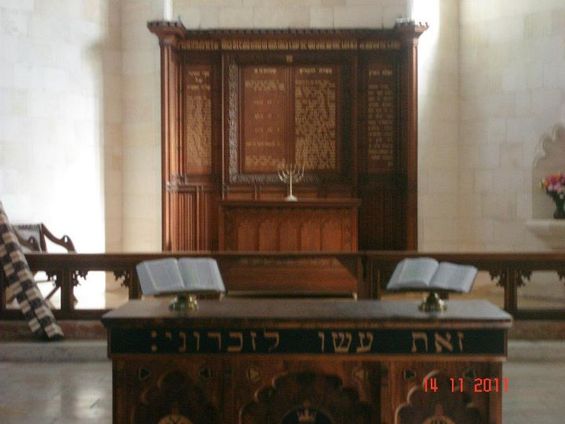 What has happened just in the past couple months has and will change Israel and Israel’s relationship to other countries and the entire world, and I am reminded by this every time I walk into my room, where a long and thin piece of yellow ribbon hangs above my desk. For over five years, this flaxen fabric has been as much of an emblematic nucleus for Israeli’s as the Magen David, or Star of David, and for most of them, it has been just as special. Seen tied onto the side mirrors of vehicles, fastened to backpacks of IDF soldiers and schoolchildren, and accompanied by equally recognizable stickers of Shalit’s face, the hopeful solidarity that never ceased kept Israeli’s together and assured that their country would never allow any of it’s citizens to be lost forever, as long as it had a say in the matter. Although Gilad is home and recovering with family and friends, I keep the ribbon in its place, as I’m sure thousands of others do, as a souvenir to remember that we must never, ever give up fighting.

Of course, the unhealthy potential for harmful repercussions is now more than just a fact of life in Israel. Thankful for the countries solidarity but weary of it’s future, some of the hundreds of thousands of people glad to see Gilad’s safe return are also hesitant, upset, and angered at the country’s decision, which saved the life of one and the hopes of many but put many, many more others in likely possibilities of danger and harm’s way. And while my own opinion is just that, my own, I’m unbelievably lucky to have been immersed in this country’s land and politics for such a large piece of history to have taken place.

The beginning of “fall” in Israel also sees many, many Jewish holidays—spending Rosh Hashanah, Yom Kippur (in Jerusalem, of all places!), and all of Sukkot in Israel was fantastic and exposed me to more of Judaic culture, of course, than ever before back in the states.

Where Israel may have cut down on it’s social demonstrations and protests, allowing the United States to take some pointers and become inspired with the Occupy Movement, rumors of future union strikes and the return of more economical protests in Israel keep the country on it’s toes. 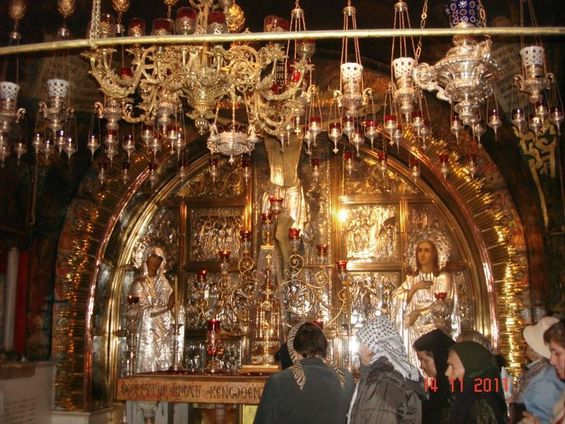 The Church of the Holy Sepulchre, where Jesus was said to have been crucified and buried

And most importantly—which I have the feeling many of my future blog posts will be centered on—are the recent uprisings and debates over the role of women in the public sphere that bring even more attention to the country, as the rapid growing ultra-Orthodox seem to be democratically taking over in strides, seeking to expand religious-based segregation onto the streets. Women are now facing new assault from this community, who once only forbid women from sharing space with men in the private realm but are now joining with Israel’s political class to extend gender partitioning and marginalization to the public realm. Israel’s ranking in gender equality is decreasing, rather than increasing in this modern world, and women’s most basic rights are beginning to come under serious attack. Last month, men from the ultra-Orthodox community of Mea Shearim forbade women from using the neighborhood’s main streets in order to prevent any inter-mingling, and on multiple occasions in the past months women have been banned from singing or dancing in public, entering or riding in the front seats of public busses, speaking publicly on religious radio stations, or appearing on billboards in Jerusalem. If not forbidden, then men have left events where women sang or danced, protested, and publicly embarrassed or taunted women for exercising these basic human rights. It’s a sad time with no excuses when a modern and progressive, trailblazing civilization falls backwards, and I look forward to working during OTZMA’s part two and part three within women’s organizations to get deep into the thick of these happenings, to better understand why this is happening, and to offer the most aid I can, in ways that I can.

Although a lot has passed, OTZMAnikim have much to look forward to. The first part of our program is ending within two weeks, and as we say our goodbyes to Karmi’el, we will be greeted with IDF uniforms and new tasks, as we enter Sar-El, a two- week volunteer program of the Israeli Defense Forces. Afterwards, we are granted a two-week break, which has many of us traveling to cities within and outside of Israel. During the second part of OTZMA, OTZMAnikim live and work in cities in the country that are partnered with Jewish Federations in North America through a project called Partnership 2000. 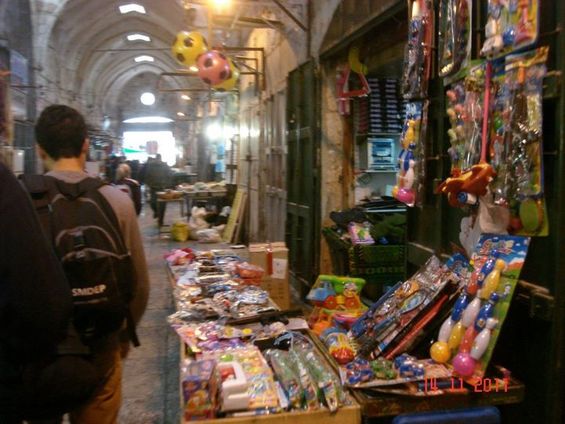 Shuk, or outdoor market, in the Muslim Quarter within the Old City

This upcoming Wednesday, I will travel to Haifa, my partnership city, with four other OTZMAnikim on our very first site visit, to meet up with Barry, the representative for Haifa-Boston Connection. To say we are all thrilled about this day is more than an understatement, and Barry has already spoken of quite a few volunteer sites that we can tell the Federation did work to target with our very specific and individual interests and skill sets in mind. Thus far, I’m impressed tremendously by the Haifa-Boston Connection, and I’m thrilled to begin writing for them on their blog, working, and living in Haifa.

Glad to have returned to the virtual world to share some adventures and speculations and enthusiastic for all that is to come, I’m grateful and blessed as always to have been offered an opportunity like this to exist in Israel during such a momentous political climate. Although the Middle East weather hasn’t changed much—for us New Englanders used to cold equaling 20 degrees Fahrenheit and below, at least—the economical and political currents are growing and I look forwards in awe and anticipation to the upcoming changes—positive, negative, uplifting and alarming, in this country. Yalla!