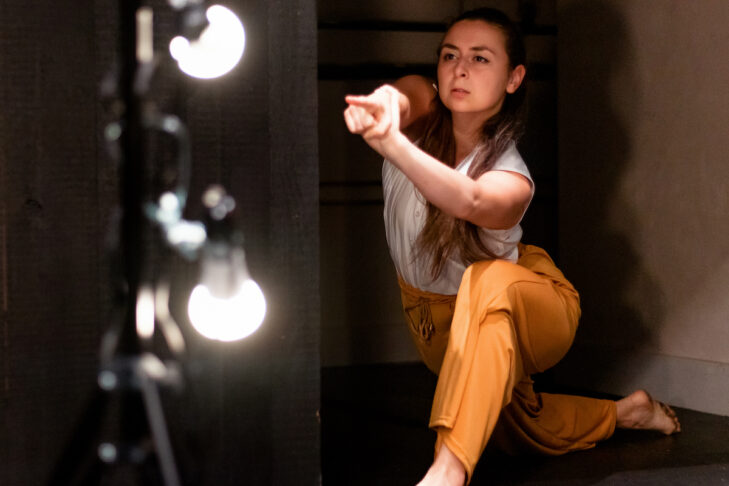 Dancer and choreographer Rachel Linsky recently spoke to JewishBoston about her affecting and evolving series of Holocaust dances she brings together under the rubric “ZACHOR”—the Hebrew word for “remember.” Linsky’s creative process for the series includes an educational component for her dancers. She also has plans to offer a series of dance workshops with local teenagers to interpret and recreate Holocaust history.

How has Judaism influenced your work as a dancer/choreographer?

I grew up at Solomon Schechter Day School and went to Camp Yavneh. So, I was always in a Jewish bubble and tight-knit community as a kid. I went to Newton South High School, which had a big Jewish population. Growing up surrounded by Judaism every day has influenced the different symbols, songs and even movements that have shown up in my dance work. I went to college at Elon University in North Carolina, which has a very small Jewish community. I was the first Jewish person a lot of my college friends had met. It was quite a contrast to how I grew up. I was always very confident in my Jewish identity because I grew up in such a comfortable environment, making my experience at Elon a positive one. 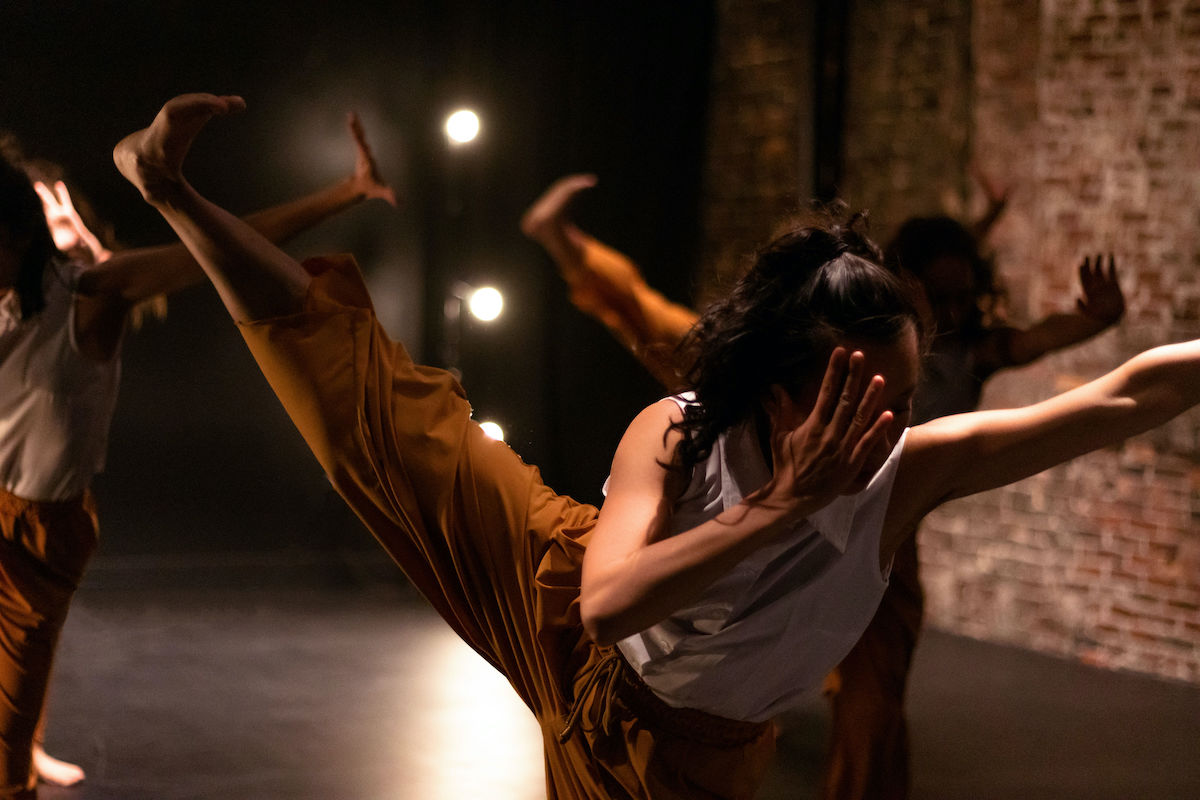 When did you start dancing?

I started dancing at Schechter, in an after-school class with the Dance Academy of Siagel Productions. I was in middle school and loved it. I then took classes at the American Academy of Ballet during the summer. By the time I was looking at colleges, I knew I wanted to study dance. I couldn’t envision doing anything else.

You’re a dancer, and you choreograph. How do you describe your work?

I’m primarily a contemporary and modern dancer, especially professionally, but I have always loved ballet. Most of the teaching I do is ballet. Because I started to dance a little bit later than most kids, I wasn’t in a rigorous environment. I always had a positive experience, and I have a casual approach to teaching ballet. I’m very into symbolism and whatever the gestural language is for a piece that I create with my dancers. For me, everything must mean something. Some dancers are very focused, especially in modern dance, on abstraction. It doesn’t always have to mean something; the audience can assign their own meaning. But I am very attached to symbolism and meaning. 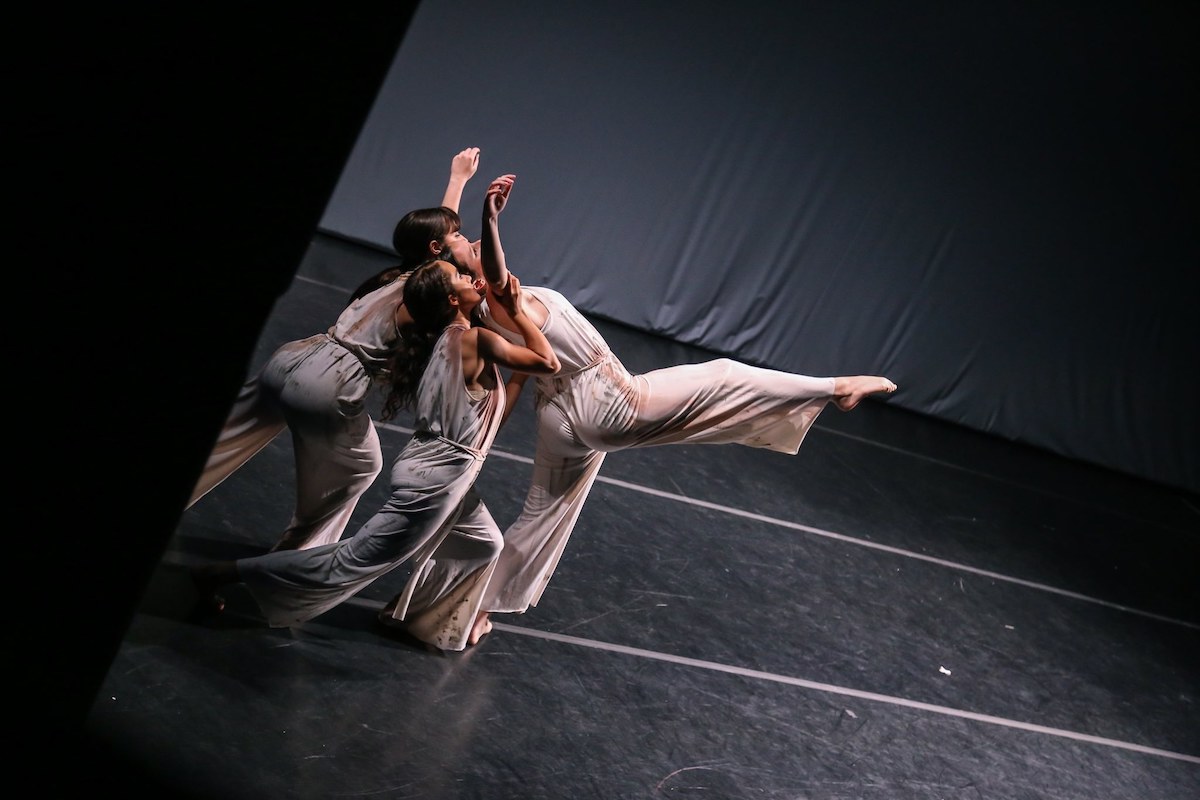 Olivia Link, Haylee Denham and Gabriela Amy-Moreno in “Do I Want to Remember” by Rachel Linsky (Photo: Olivia Moon Photography)

“ZACHOR” grew out of your Jewish and dance experiences. Why was it important to you to do this Holocaust-inspired piece?

“ZACHOR” has turned into an ongoing series that I plan to continue for a while. I created the first piece that started the series for Yom HaShoah programming at Elon. Students in the dance program loved the piece and found the performance and the program very meaningful. So, I realized that pieces like that and the overall project had the potential to bring dance to the Jewish community and others. Dance’s communicative powers have the power to evoke emotion and sympathy. You can take a story or a testimony and tell it through the universal language of movement. Anyone watching can apply their own personal history. It was an exciting opportunity to share dance and get non-dancers from the Jewish community interested in dance.

When I graduated from college, I submitted the piece to Urbanity Dance’s Boston Contemporary Dance Festival, and it was accepted. I also received a small grant from CJP, which has supported my work from the beginning. I taught the piece to three new dancers and presented it at the festival, where it was well-received. 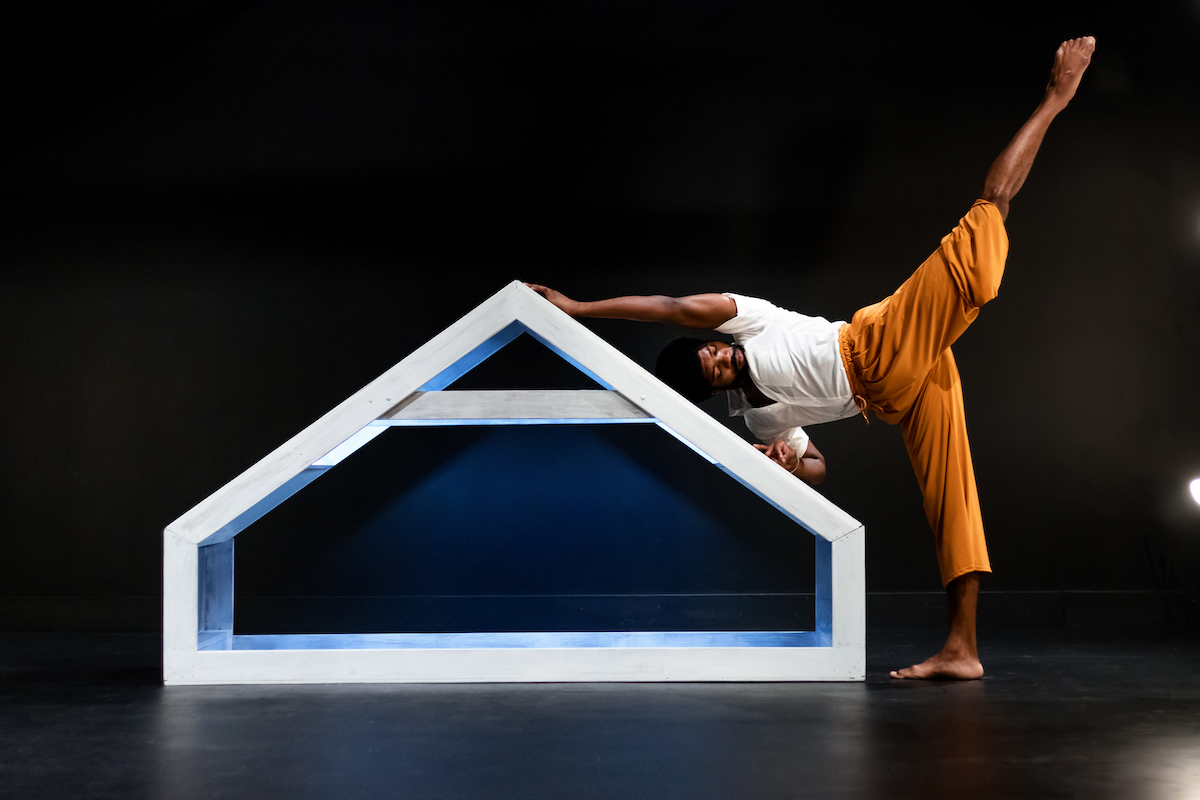 Can you walk us through the evolution of “ZACHOR”?

A piece called “Selection” was filmed at the New England Holocaust Memorial at the height of the pandemic in the summer of 2020. We based it on various survivors’ memories of the selection process in concentration camps. The piece was mainly gestural because it was made over Zoom, so we couldn’t move as largely. Some of the memories were of how people tried to make themselves look older to fit into an age group used as workers instead of killed right away. The idea of vigorously rubbing the face to make it redder or blushing brought up horrible memories of coping. Some people used their blood to brighten up their appearances. Those vigorous movements are in “Selection.”

We also included a memory from Elie Wiesel’s memoir, “Night,” in which he says—and I’m paraphrasing—“For the first time in Jewish history, I heard men reciting Kaddish over themselves because they knew they were going to be murdered.” The quote inspired a lot of the piece’s movement. Throughout choreographing, I asked myself, what does the Kaddish mean? What did it mean that these men recited it for themselves? 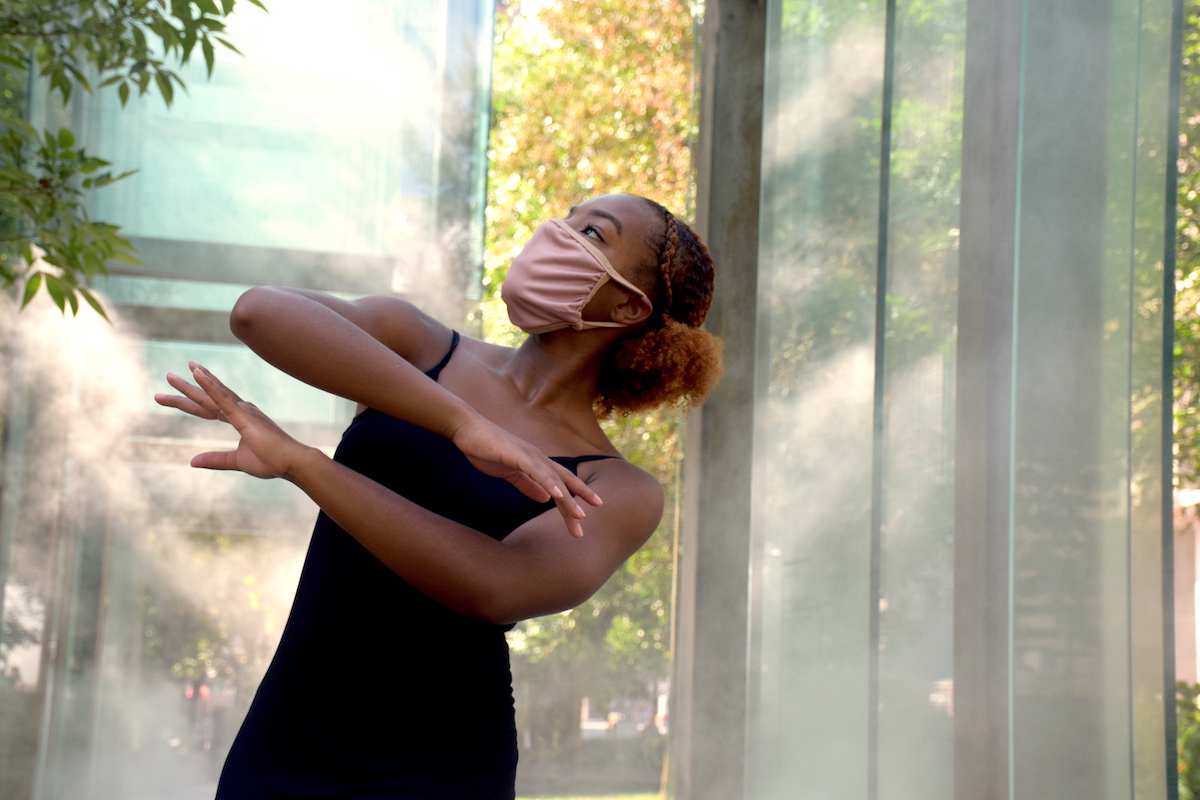 How did the pandemic affect your work on “ZACHOR”?

The pieces I worked on for “ZACHOR” during the pandemic were mostly gestural. We did Zoom rehearsals where everyone was in their own spaces. I spent a lot of time taking my dancers through gestures I created, which led to the movement. We bore in mind questions such as, “Where did this come from? Whose memory is it from? What is the meaning?” After Zoom rehearsals, we came together in person outside at the New England Holocaust Memorial and filmed our performance.

You mentioned that your work on “ZACHOR” is ongoing. How many pieces do you envision adding to the work?

I plan to work on pieces indefinitely. For example, there’s “Hidden,” which is inspired by Aaron Elster’s story—he was hidden from the Nazis in a Polish family’s attic for two years. That piece comes after “Selection.” After viewing the first filmed performance, I clearly saw how rehearsing over Zoom affected the piece. We couldn’t do as much big dancing, so I spent a lot of time talking to my dancers about the origins of each of the gestures and what they symbolized to me as I created them. I also had the dancers read Aaron’s memoir, “I Still See Her Haunting Eyes.” We discussed the themes that came up in the book over Zoom. I was interested in having this learning component for the piece. The cast of six dancers for “Hidden” come from different backgrounds and I was interested in hearing everyone’s reflections. We pondered why they thought it was important to continue studying these stories and this history today. I then asked the dancers to generate gestures and movements based on Aaron’s story that most resonated with them.

When things were easier in the pandemic, we gathered again in person last spring for rehearsals and created a 13-minute film inspired by Aaron’s story. This year, I’m working to develop “Hidden” into a complete and live evening-length work. I’ve done so much film work these past two years because of the pandemic, so I’m excited to do live performances again.

The music of Erwin Schulhoff, a Czech Jewish composer who died in a Bavarian prison in 1941, will comprise another segment of “ZACHOR.” The Nazis considered his jazz-influenced music “degenerate art” and banned it. I’m temporarily calling the piece “The Schulhoff Collaboration.” I will explore the underground culture of jazz music and swing dance that formed in Nazi Germany, and the unique ways in which it served as a form of cultural resistance among youth. 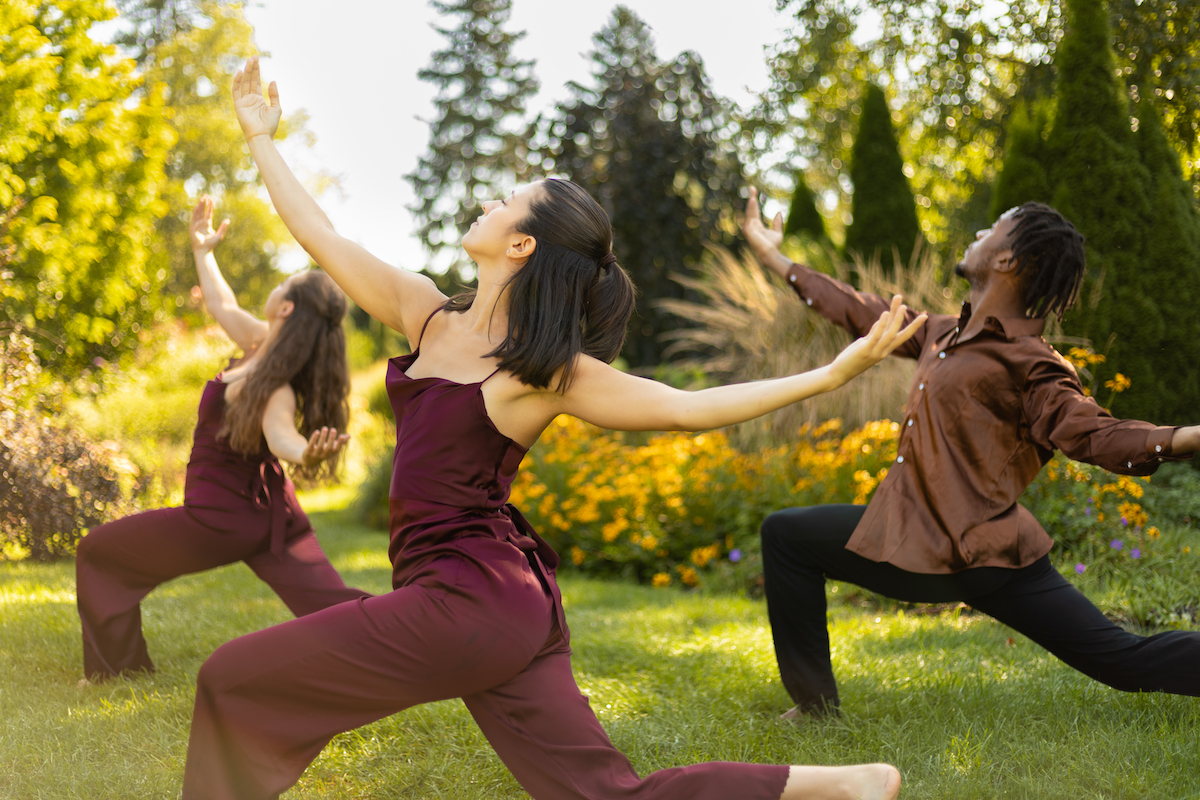 Is there anything else you want to mention?

My work is at a very exciting stage, especially as I make the transition to create live work again. As I’ve developed this project, my creative process has shifted, and I see the dancers involved are not just coming to rehearsal and learning material; they are involved in the research. They contribute to the movement vocabulary and the movement language we create. My goal is to create a resonant and embodied Holocaust education experience for the dancers and a thought-provoking performance for the audience. I’m in a place where I’m interested in sharing the process with more people and I’m excited to work with high school students for the first time. I think these pieces have the potential to spark a unique way to study the Holocaust and other parts of history. Taking an individual testimony, story or memory and then focusing on embodying it is so resonant.