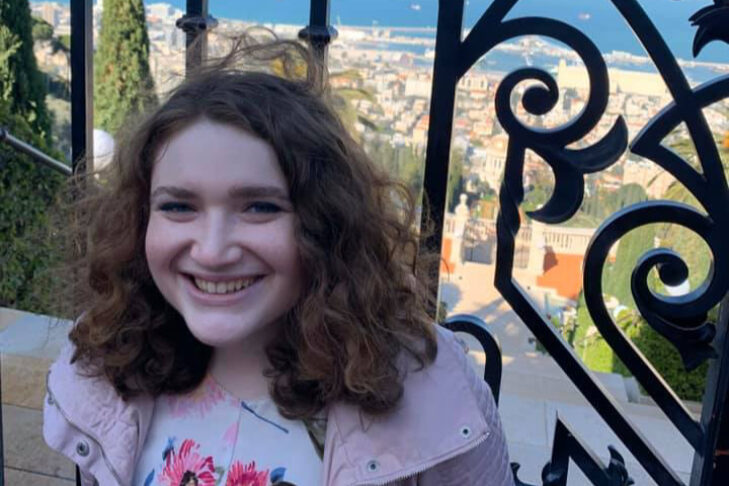 Entering her third year at Northeastern University, Deanna Schwartz has been using her journalism and public relations skills to keep students connected during the COVID-19 pandemic.

On March 25, Schwartz wrote the first article about Zoom University Hillel. A platform based on Facebook and Zoom, the start-up project drew 8,000 students within four days of launching. By now, nearly 20,000 students around the world have tapped into the network started by Clark University’s Ari Hoffman, who—like Schwartz—has been involved with CJP.

In addition to networking among, for example, Russian-speaking Jews, trans Jews and Latino Jews, Zoom University Hillel offers memes, polls, game nights and Jewish-themed discussions. There are community Shabbat candle-lightings and lessons connecting Jewish texts to the situation around the world. The platform has been so popular that branded fashion apparel was created.

As Schwartz wrote in her article for the Jewish Telegraphic Agency: “In a time of fear and uncertainty, these Facebook groups are bringing students together and providing a sense of community.” The article was republished widely.

At Northeastern, Schwartz has been a mover and shaker in Jewish life for the past two years. Last July, she went on her campus IACT Birthright Israel trip, an experience that solidified her love for Jewish community at Northeastern, she said.

“Our staff is so welcoming and I feel like Hillel is my home away from home,” said Schwartz, who was just chosen to sit on the Hillel International student cabinet. As a member of that group, she will help steer new strategies for campus Jewish life, whether students return to campus in August or stay home.

According to her campus IACT coordinator Shira Hartman, Schwartz has helped Hillel up its social media game since her Birthright trip last summer. Hartman was not surprised when Schwartz wrote the first story about Zoom University Hillel in March, considering the student’s PR and journalism skills.

“Deanna became my social media intern last fall and helped me produce a photo contest campaign,” said Hartman. “She increased our likes and subsequently our number of followers. She is very active in our community, volunteering in anything we need help with.”

Schwartz’s other touch points with CJP’s IACT initiative included a trip to the San Diego border last year and Alternative Spring Break in Israel in March. During that Haifa-based service trip, Schwartz helped make a video about the mission, where 20 students served at five nonprofits.

“I miss the campus community a lot right now. I think we are going to come back stronger and closer after all of this,” said Schwartz, who frequently attends Shabbat dinners at Hillel.

Although Schwartz had been scheduled to intern at The Boston Globe this summer, the pandemic altered her plans. She is about to begin interning at WGBH’s “Beat the Press.”