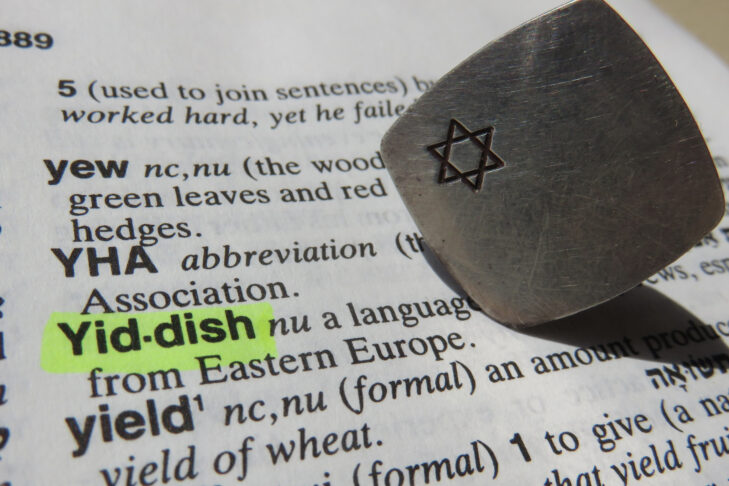 For many Jewish people, Yiddish is a language so reduced to its more humorous elements as to become completely inaccessible. While terms such as “oy vey” and “chutzpah” have entered the popular lexicon, the language as a whole saw a dramatic decline during the Holocaust, when large swaths of the Yiddish-speaking population were wiped out. This cultural erasure and pressure to assimilate into more “commonly used” languages means that many non-Hasidic Jews, including myself, have little to no background with a significant part of their culture.

My paternal great-grandmother spoke Yiddish, and my father sprinkled phrases in throughout my childhood—perhaps in part because swearing in front of a kid dying to swear is less likely to lead to trouble if the curses aren’t in English. I could recite a few choice phrases, but nobody I knew spoke Yiddish fluently, and while I felt a certain attachment to the language, I’d never gotten around to properly learning it—until now.

Me: Totally. Every single day.

Me *in perfect Yiddish*: “The Zebra is next to the pyramid.”

Duolingo, a language learning app known for its green owl mascot, boasts a wide variety of languages both real and fictional (Klingon, anyone?), and has just added its first Yiddish course. Jewish users from all over the world have flocked to the app for an easier way to learn the language remotely. The large-scale positive response indicates a heartening interest in keeping the language alive, particularly when so many languages are buried under the weight of colonialism and oppression.

I try not to get too emotional over advertisements, but this one slayed me. In the image, two Jewish people from two vastly different times form a connection based on their shared understanding of the language. This packs an extra punch when we remember how much of Jewish culture has been erased, and how resilient Jewish people have been in taking what we can carry and running with it.

You know Yiddish on Duolingo is authentic when
1. “Complain” is one of the first categories of learning

We see this in young creators of Judaica, of essayists utilizing new mediums to analyze media through a Jewish lens, of chefs and food writers imbuing their craft with culture at every step. The rise of Yiddish on Duolingo is just one facet of all the ways young Jewish people maintain their parents’ and grandparents’ history, despite those who wish to stamp it out.

My submission to the current trend of Duolingo Yiddish memes pic.twitter.com/cLDAKomNor

I’ve just begun the Yiddish Duolingo course, which is my first course on the app, and in spite of my inherent difficulty with languages, I’m finding the format engaging and interesting. Though language learning is often best through immersion, Duolingo provides an easier way to connect with a piece of Ashkenazi culture many had found inaccessible. I’m interested to see if this will have a positive impact on the number of Yiddish speakers who did not have the opportunity to learn as kids.

Alright so … Duolingo Yiddish. What can I say? I’m disappointed it won’t replace my grandfather teaching me all of the amazing Yiddish cursed and swears. And I’m annoyed that *all* the voices don’t have my grandparents’ accents. But I am having way too much fun.

Do you plan to take the course? Let me know in the comments!