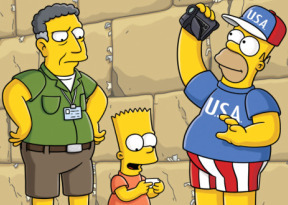 The Simpsons are very popular in Israel. During my first visit in the early 1990s, I saw the whole mishpacha on Ben Yehuda Street in Jerusalem. Much to my surprise, the giant cartoon mascots were promoting frozen TV dinners!

My husband also has a small collection of Hebrew Simpsons gum and candy bar wrappers.

But this Sunday will be the first time that Homer, Marge, Bart, Lisa and Maggie will be flying El Al on the small screen.

I can only assume they’ll be traveling on Israel’s national airline, but only a few details have leaked out about the Jerusalem-themed episode — including comedian Sacha Baron Cohen being Bart and Homer’s tour guide.

I believe that American pop culture can often provide Jewish teaching moments in the classroom. Of course, with the Simpsons, the level of irreverence will determine how age appropriate those lessons can be.

According to the Israeli newspaper Ha’aretz, the episode will be called “The Greatest Story Ever D’ohed,” and will have Homer come down with a case of “Jerusalem Syndrome,” the psychological state where one believes he or she is a Biblical personality or prophet.

Simpsons producer Al Jean warns that “people from all three religions will be equally offended.”

I’m honestly not a huge fan of the show, but my radar will be up and running when it airs the day before Pesach.

I wonder if Bart and Homer will see any flying chairs at the Kotel.

The Simpsons’ Israel episode airs at 8 p.m. Sunday, March 28 on FOX.  Please let me know what you think of the show!