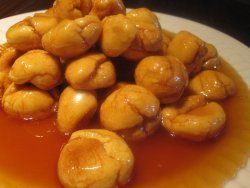 Honey is an integral element on the Rosh Hashanah table and in thinking about what to write about for my posts about foods to serve during the upcoming New Year celebrations, I knew I had to include a dish in which the main ingredient consisted of this golden sweetener.

Although honey cake is a classic Ashkenazic dessert that has become synonymous with this holiday for Jews who are part of this community, I wanted to try my hand at something I hadn’t made before. So I turned to the numerous cookbooks that line my bookshelves and found this recipe for teiglach. The recipe jumped off the page at me as soon as I saw it, because in my books anything that is fried or baked and subsequently covered in honey sounds delicious.

Despite the fact that I hadn’t made these before, they are traditional Rosh Hashanah fare in the Ashkenazi community with origins that date back to the times of the Romans who, according to Gil Marks, made strips of fried dough in honey called vermiculos. Italian Jews adopted the custom of making vermiculos but this dish disappeared from their repertoire in the middle ages. It was in the twelfth century that Franco-German Rabbis mentioned eating a dish of fried or baked strips of dough covered in honey called vermesel or verimlish, at the beginning of the Sabbath meal. Despite the fact that its name went through changes, being called gremsel and then chremsel in Eastern Europe, it is to this dish of vermesel that teiglach owes its beginnings. Although most popular on Rosh Hashanah when it is served in order to help usher in a sweet new year, teiglach is also eaten on joyous occasions such as weddings and Brit Milahs.

Learn more and get the recipe at Jewesses with Attitude >>