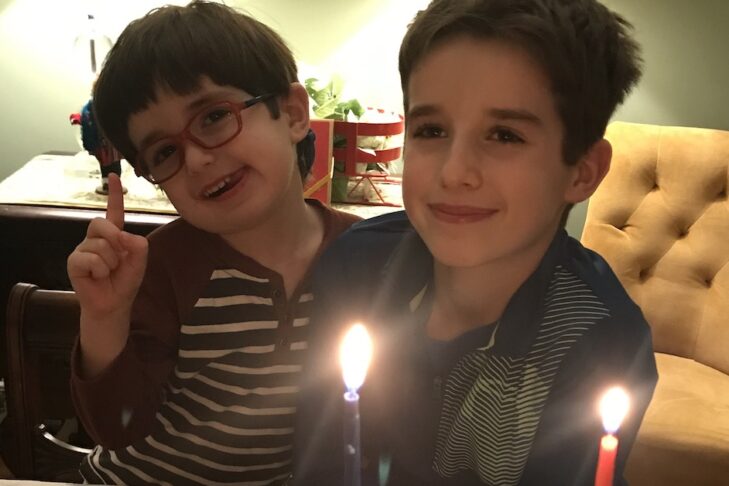 Normally, we go to my parents’ house to celebrate Hanukkah and light my dad’s shiny plastic blue menorah that he made at Hebrew school, encrusted with candle wax dating from the Kennedy administration. We’d also wander over to our neighbor Leah’s house for latkes (hi, Leah!).

But this year is different. First, no gatherings with my parents. Instead, my father lent us the menorah so we could have our own celebration. Second, my kids have been in remote school since March and, admirably, have refrained from killing one another. So they deserve something special. As such, I’m trying to do something a little bit different for each night, instead of handing them a last-minute gift and some gelt and calling it a day.

Last night, they each got a treat they’d been coveting. Andy received fuzzy panda socks, perfect for lounging. (He already wears a full panda costume during school. He is an individual.) Peter, meanwhile, was treated to a digital Teenage Mutant Ninja Turtles watch that flashes like a disco ball. Both cost about $10. It doesn’t take much to make them happy, turns out.

Coming up, we’ve ordered a full spread from Mamaleh’s (which now delivers to the suburbs!), including a tub of whitefish salad. This weekend, I’m also stopping by Michael’s Deli in Brookline for my favorite latkes. Also this weekend, Peter will give Hanukkah yoga (yes, that’s a thing) a whirl, and I’ll head over to Union Square Donuts for sufganiyot.

As for Andy, we’re discussing ways he can donate his allowance to a cause that he supports. I recently got him a Greenlight card, which is essentially a debit card for kids that helps them budget and allocate (my) money to various pre-set categories, from toys to charity. It lets kids search donations by type, too, from animals to the environment to the arts. At 10, he’s nearing an age where he’s just beginning to realize that not every kid has a Nintendo Switch, a pet guinea pig and cozy panda socks. But I also want him to determine what causes matter instead of me insisting that he scrounge up his stray pennies and donate to the food pantry (although it’s not a bad thing to do).

So, a small weekend: preschool yoga, light philanthropy lessons and fried snacks. Marking time has become important during a stretch when each day seems so similar. So anything—from latkes to jelly doughnuts to furry socks—that helps to distinguish one moment from another feels important.

But it’s not all bad: This slow, disconcerting weirdness has nudged me toward greater thoughtfulness about a holiday we took for granted. I’m going to spend the next seven days thinking of ways to make my kids surprised and delighted (not always my first priority), because they’ve earned it. And next year, hopefully, things will be back to normal. All it takes is a miracle, right? Or at least a vaccine.