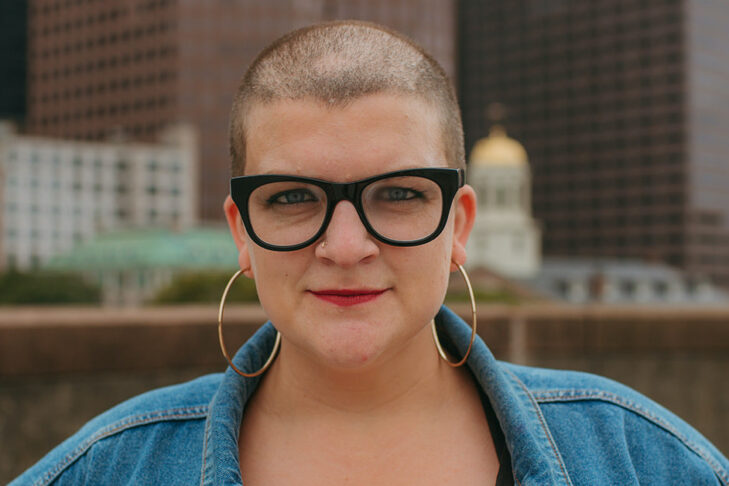 Social justice activist and teacher Emilia Diamant is Avodah’s new national director of programming. Founded in 1998, Avodah is dedicated to training new generations of Jewish social justice leaders. Diamant, who recently spoke to JewishBoston, said, “My Judaism is political, and my politics are Jewish.” She brings almost two decades of social justice work from Jewish and secular sectors to her new position. She has been a JOIN for Justice Organizing Fellow and the executive director of the Boston office of the Jeremiah Project, where she oversaw coordinating resources for mothers and children in the city of Boston.

The Newton native, who lives in Waltham, discussed Avodah’s ethos, her consultancy work with Dimensions—a women-and people-of-color-led nonprofit that provides training and consultancy in diversity, equity and inclusion—and her hopes for advancing Avodah’s mission. Part of Diamant’s work will be supervising the organization’s Jewish Service Corps, an anti-poverty initiative in which people ages 21 to 26 live communally in a pluralistic environment and work in nonprofit organizations.

“Collaboration is one of Avodah’s key principles,” said Diamant. “We collaborate deeply with nonprofits where our corps members are placed, and our justice fellows work in Chicago and Kansas City. Our fellows could be doing anti-poverty or hunger work. Others are doing legal research to keep people in their homes. Many of our alumni go on to careers in our partner organizations.”

Avodah’s principles, such as community, justice and mutual responsibility, are also critical to the organization’s work philosophy. Diamant said Avodah’s participants are “trained in understanding that all these fights [for social justice] are profoundly connected. As an example, we can’t talk about gun violence if we’re not talking about racial justice, criminal justice reform and police brutality. We have to talk about all these things together. If we’re talking about anti-poverty, we need to talk about safety.”

Diamant also pointed out that Avodah holds up excellence as a crucial standard. “What we’re working toward at Avodah is the meaning of excellence and how it contributes to our value of justice,” she said. “If excellence is just about straight A’s in school, then we’re missing out on a lot of education. What does it look like to demand excellence of ourselves and to do good work in the world while considering justice? It’s an important thought experiment as we look toward what it means to be Jews in justice.”

On her personal website, Diamant talks about the concept of “coaching toward liberation” and explains that her partnership with Yavilah McCoy, CEO of Dimensions, introduced the idea to her. For almost two years, Diamant has been Dimensions’ co-director of the JOC-Allies Project. She and a partner run parallel cohorts for women, Jewish and not Jewish, interested in anti-racist exploration and dismantling white supremacy culture. Diamant works with white women while her counterpart runs a similar track for Black women.

Diamant explained that Dimensions does its work within liberatory practice. “It’s about working toward a world where we’re all experiencing liberation, rather than equity,” she said. “My goal as a white person is to move all of us toward that liberation, which is a step beyond equity. Equity means that everyone gets the same thing. Liberation means that everyone gets what they need, lives in abundance and has access to rest and beauty.”

At her core, Diamant is also a teacher who has taught all over the world. She has a passion for engaging young people, which she has done through her work with teens through The Tent at Temple Israel of Boston and Prozdor at Hebrew College in Newton. Diamant also earned a master’s degree in social work at the University of North Carolina in Chapel Hill. She’s in good company with Avodah’s 1,200-plus-strong alumni community, many of whom are social workers. “It’s not surprising,” said Diamant. “Our alumni often call their Avodah experience formational and important in helping them understand themselves as seekers of justice while doing that work in a Jewish capacity.”

After her time at Prozdor, Diamant honed her leadership skills at the Jeremiah Project. She found it difficult to lead the project in Massachusetts, a progressive state that could not provide child care, transportation and housing for all its residents. “Massachusetts has an incredible early childhood system, and it is unaffordable,” she said. “There are not enough vouchers to go around because there is not enough funding for kids to go to school. I saw mothers who wanted to earn a college degree and find a good job and better housing, yet had nowhere to send their kids to school or day care.”

Diamant explored the challenges she encountered leading the Jeremiah Project in her work at Dimensions. “Thanks to Yavilah, and the other women at Dimensions, I worked through issues that had a racialized component,” she said. “I understand where I made mistakes as a leader, [how] to face them and not to become stuck in a place of feeling that I could not enter a space, particularly with Black women, again. It was a very healing process for me.”

When the job of national director of programming was available at Avodah, Diamant was ready to return to a Jewish space. She was immediately comfortable with the organization’s mission, which she saw “as very much in the same universe as JOIN. I like to say that JOIN and Avodah are friendly cousins. I found that I aligned politically with Avodah and felt they had the same orientation as I did.” For its part, the Avodah leadership found in Diamant someone who brought a fresh perspective to its work. “I knew my justice and racial equity orientation would enable me to enjoy myself in the position,” she noted. “I could really take on exciting projects and still have an impact on young adults doing this social justice work. It checked all the boxes for me.”

In her new position, Diamant looks forward to continuing to wrestle with questions concerning justice “and how we show up as Jews in the fight for equity and justice. I’m proud that Avodah was a co-sponsor of the Jewish March for Abortion and has a strong stance on fighting white supremacy. I’ve been here almost two months, and so much has already happened in the world.”