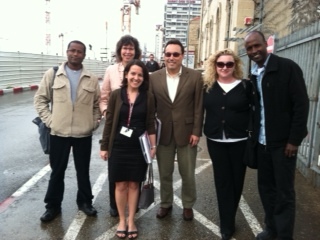 I just returned from a remarkable 10-day trip to Israel with two other JVS employees. The primary purpose of the trip was to work with JVS’ partners in Haifa, including Shiluvim, an amazing Ethiopian Jewish organization whose goal is the empowerment of the Ethiopian Israeli community and its full integration into all aspects of Haifa society. Ethiopian Jews have been immigrating to Israel since the 1970’s, and have faced many challenges in integrating into Israeli society, including lack of Hebrew language facility, lack of job skills, no familiarity with Israeli culture and its modern technological ways, and racial discrimination.

In the six years since Shiluvim was founded, the percentage of working-age Ethiopians in Haifa that are employed has increased from 40% to nearly 85%. However, most of the jobs held by Ethiopians are low-wage jobs, often through temp agencies with no benefits, job security and opportunity for advancement. JVS has been working with Shiluvim staff to introduce the idea of employer partnerships as a way to open up opportunities for better jobs. On this trip, we were joined by one of our employer partners, Joanne Pokaski, Director of Workforce Development at Beth Israel Deaconness Medical Center. We, and a team from Shiluvim, met with all three hospitals in Haifa, and started very promising conversations about building partnerships with Shiluvim to hire and train Ethiopians for open positions. The reception on the part of the hospitals was very enthusiastic.

It was not all work of course. For some of us this was our first visit to Israel and, although our expectations were high, the time we spent touring far exceeded those expectations. We visited the beach in Haifa, a lovely little town called Zichron Ya’akov, and the ancient port of Acre, near the Lebanese border. We saw the historical site of Masada and learned about its tragic and fascinating history. We got to float in the Dead Sea and visited the incredibly beautiful and historic city of Jerusalem, exploring the Old City, the Dome of the Rock and the Western Wall.

This experience was rich with beauty and history and one we will never forget.