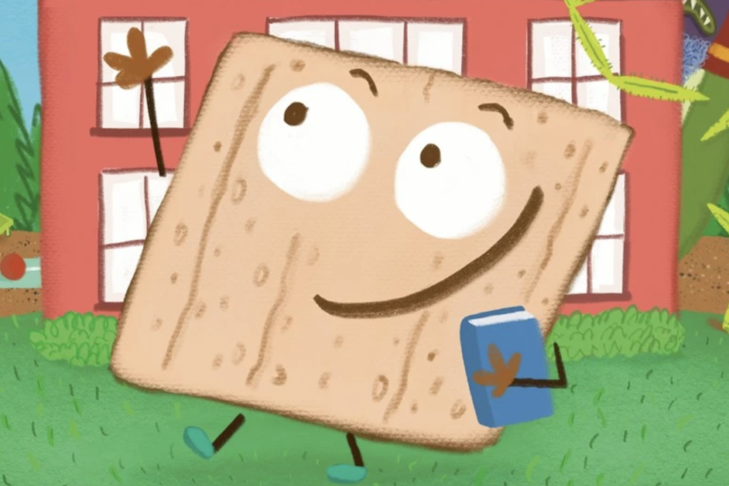 “Meet the Matzah” follows Alfie Koman (get it?) on his exploits in Mrs. Crust’s class, attended by a diverse array of carb-children, from Cornelius Tortilla to Burnie Toast to the thuggish Loaf. Not shockingly, Alfie enjoys hiding in class—until it’s time to share his version of Passover, complete with a recounting of the 10 plagues with some confused help from his classmates (indoor recess, bad haircuts, et cetera). 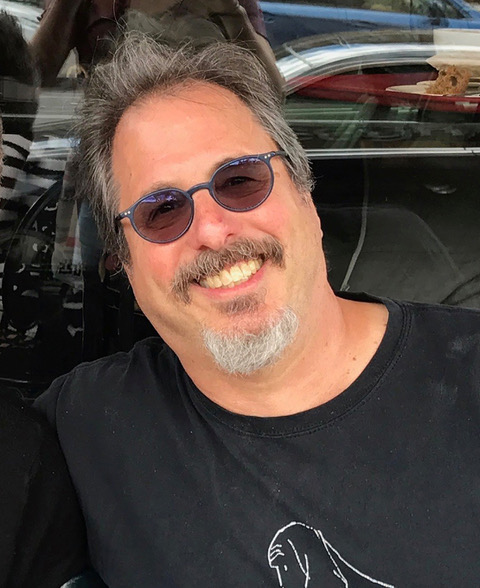 Alfie sets his classmates straight and even invites a few over for seder. For newbies like Alfie’s non-Jewish pals Loaf and Bun, there’s also a Passover glossary.

How’d you get the idea for this book?

I wasn’t that interested in doing a Passover book until I realized that afikomen is a great pun for a kid’s name: Alfie Koman. And I started thinking about a school story. Alfie Koman likes to hide, but why does he like to hide? And I thought, “Well, there’s got to be a bully.” And I thought that in some way, the Passover story is a bully’s story. The pharaoh was a big bully. And I thought, if I could somehow create an allegory to a school story, I’d have something. So that’s where the initial brain burst came from, first coming up with Alfie Koman and then wanting to create a bully story around Passover.

What do you think families and kids will get out of this story?

I’m hoping kids take away from this a fun way to be exploring the Passover story, but through funny characters, through characters who get the story wrong. Kids who read it and hear it, if I do a visit, they love to be the ones who can correct the story. That’s the goal of what I’m trying to do: Create a humorous way to look at the holidays and to empower the reader to know more than the author in some ways. You know, it’s both an introduction to the Jewish holidays and a way to embrace them in a new way.

Why should we be excited for Passover, especially this year?

Gosh, I had already written the book before the lockdown, but I started illustrating it in March of last year. So writing a book that involves plagues and terrible things—there I was drawing my page about the 10 plagues, feeling just so empowered and connected and also sad about where we all were a year ago. The Passover story is all about the Exodus; it’s about coming into the light. And I had to hold on to a lot of hope over the past year, and it was interesting and strange to be working on this book during such strange times we’re in.

I love these illustrations. They’re a little wacky. Who are your inspirations?

Well, I would love to think it’s a bit of the simplicity of Mo Willems with the exaggerated humor of a Rocky & Bullwinkle. I’m trying to create a story that works on different levels, which is both for the kids and for the older reader, because they market this book to pre-K and kindergarten; they say up to 4 or 6. But I know the kids in fifth and fourth grade just find it hysterical because they love the extra layer of humor.

My drawing style emerged out of a need to doodle. My style was more like doodling; it’s very messy. Someone called it messy, and it was a compliment. I took it that way. I never studied art; I just have always drawn cartoons. I’m fortunate to get the opportunity to put them into books.

I think that would be in my aunt Evelyn’s kitchen in Brookline, in the refrigerator underneath the lettuce.

Gefilte fish: yes or no?

How do you prepare kids for a long seder?

Oh, this could be controversial. My feeling is you have to be flexible; you have to let a little roaming happen. Jews chose to roam for, what, 40 years? The kids can roam a little bit. It’s a long time, especially if you’re doing a real seder. That’s a lot of sitting. But on this night we’re reclining, so it’s not that bad.

It’ll be for Purim: “Meet the Hamantaschen.” It’s about three hamantaschen detectives who are called to the scene of the missing megillah. It will come out in February or March 2022. (Courtesy photo)
Never miss the best stories and events for families, children and teens! Get JewishBoston Plus Kids.
Filed Under: