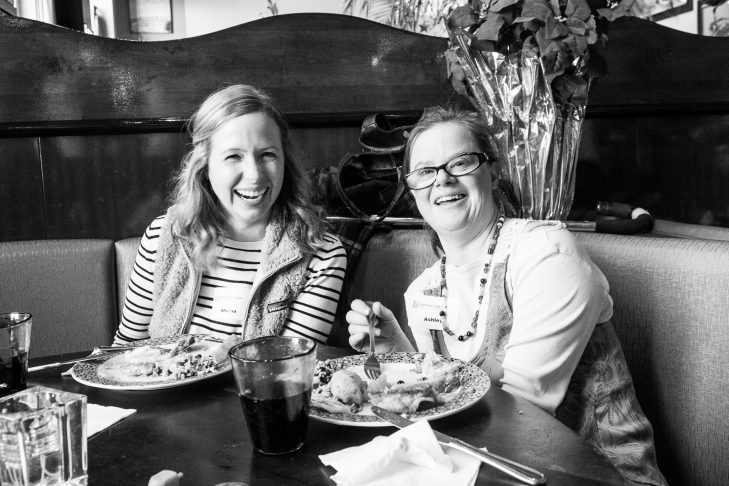 Sometimes an acronym is a perfect descriptor for what happens in the organization it represents. In the case of MAGIC—Monthly Activity Groups in the Community—it captures what happens between volunteers and clients at Jewish Big Brothers Big Sisters of Greater Boston. The program falls under the auspices of its overall Friend 2 Friend Program, which pairs a volunteer “Friend” with an adult who has mild to moderate disabilities.

Friend 2 Friend is embedded in the JBBBS broader and original century-old mandate to serve as a youth mentoring organization. The organization has a rich history both nationally and locally. According to its website, it was one of the 12 founding members of the national Big Brothers Big Sisters movement. Currently, JBBBS is one of 400 independent Big Brothers Big Sisters programs in the United States.

Friend 2 Friend was founded in 1992, and in the ensuing 27 years it has grown to serve a population that can otherwise feel socially isolated or ignored. Friend 2 Friend has two different program options: MAGIC is the monthly communal meet-up with other matches and agency-planned activities, and the F2F Community Program fosters a one-to-one relationship between a volunteer and client at the match’s choice of timing and activity. In the program’s vocabulary, volunteers and clients are referred to as “Friends,” further reflecting the organization’s warm culture.

The first step to becoming a Friend 2 Friend volunteer is to complete an initial inquiry form. Tania Gutman Gray, JBBBS outreach manager, will then contact the potential volunteer. While Gray’s job description is to go over the program and gauge particular interests, she is also part cheerleader and a fount of knowledge about everything JBBBS. Her dedication to the mission is inspiring. Gray came to her position with a J.D. and experience in the Jewish communal world. “There are so many beautiful stories that happen here,” she told JewishBoston. “My job is to be the first stop on a JBBBS volunteer journey. I’m deeply committed to the mission.”

Gray will assign a volunteer to a clinical match specialist (CMS) who does an in-depth intake. The questions become more personal to learn about a person’s background, family, current job and hobbies. Additionally, there is a background check, which Erin Walker, a social worker and CMS, said is extensive. “It’s important to get that best match,” she said. “There are a lot of potential friends on the waitlist.” According to the JBBBS website, that waitlist can be as long as 50 people at any given time.

Stacey Schneiderman, another CMS, added that watching relationships between volunteers and clients grow is one of the joys of her job. Schneiderman comes to her position with an extensive background in special education. Her first contact with JBBBS was as a volunteer in Friend 2 Friend. She said that over the years she has seen wonderful relationships blossom in both the MAGIC and F2F Community Program.

Walker and Schneiderman shared a number of poignant anecdotes about various friendships in the program. They cited one match that is still going strong after 16 years. The minimum commitment to volunteer is one year. Another successful match has been between a retired African-American teacher and a friend who is a Jewish white woman. The two women have gone to synagogue services, as well as gospel church services, together. “No one has to be Jewish in this equation,” Walker said. “Volunteers and clients from all backgrounds are welcomed to participate.”

Adriana has participated as a client in Friend 2 Friend for five years. She said one of the many benefits of participating in MAGIC is “hanging out with friends and being social with people. We’ve done karaoke and gone to plays and sporting events together. I love hanging out with my friend.”

Volunteer Josh said in an email, “I absolutely adore JBBBS; they are perhaps the most professional nonprofit I have ever encountered, bar none.”

The MAGIC program has been so successful that JBBBS has added a third group to its roster. Laura Shulman Brochstein, JBBBS program director, attributed some of that success to enabling adults with disabilities to make unique social connections. “The focus is not on mentoring per se, but what people give to each other,” she said. “It’s exciting to see.”

Brochstein is relatively new on the job and looks forward to building partnerships with various organizations. Currently on her radar is a goal to foster more outdoor activities for Friend 2 Friend participants. JBBBS already sponsors Yom Sport, a field day in June for adults with disabilities. The day also presents people with a one-off volunteer opportunity. “We’re in an expansive phase of the organization,” said Brochstein. “People definitely want to be part of JBBBS.”