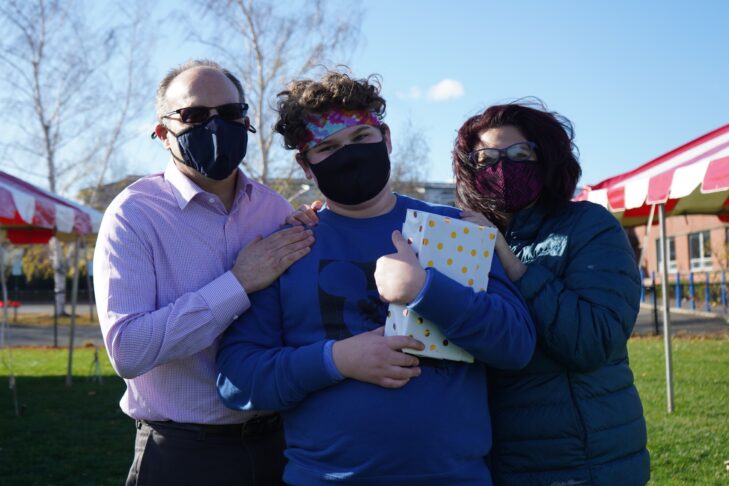 Stephanie and Josh Wilson have a current eighth grader, Benjy, who transferred to JCDS at the start of seventh grade from public school, where he didn’t have a “tribe.” The Wilsons wish they had found JCDS sooner—it was apparent from the first moment that Benjy belonged at JCDS and that it was, in his words, “the home of his heart.” We asked Stephanie about the experience.

What drew your family to JCDS?

My son, Benjy, always had an affinity for Jewish ritual and education, and had life-changing experiences at Camp Tel Noar. Our plan was to send him to public school until high school, mostly because we didn’t think we could financially afford to send him to private school. When the pandemic struck, we knew he would need a nurturing environment to get through all the challenges the coming year would bring. I had been aware of JCDS for a long time but never thought it would be a possibility for us. The pandemic showed us we needed to find a way to make it work. JCDS was the only school I researched and approached. I loved the school’s attention to the whole child and the focus on creating good human beings, not just academic achievement. This dovetailed with my own philosophy, which is that my job is to teach Benjy how to be a good human and to learn how to manage the stress of growing up and becoming more independent. I was drawn to a school that would be a partner in that endeavor. I also loved JCDS’s commitment to pluralism and to teaching the empathy that it requires.

What has the transition experience been like for Benjy?

Benjy loved the JCDS feel from the first time he talked over Zoom with JCDS staff and faculty. He was excited to begin, and his enthusiasm was apparent as we toured the building before the start of school. He was outspoken with his questions, which I had never seen before, and his personal spark lit up brightly. At the beginning of the school year, Benjy slid into JCDS life as if he had always been there. He loved his new teachers, his classmates and classes. He said it felt like camp, only better, because he got to learn new stuff every day. It was apparent from the first moment that Benjy belonged at JCDS and that it was, in his words, “the home of his heart.”

How was Benjy integrated into JCDS from an educational standpoint?

Educationally, Benjy integrated easily into JCDS. When we knew he would attend, we started Hebrew tutoring over the summer three days a week. During those couple of months, Benjy went from no knowledge of Hebrew to being able to understand the construction of the language and how to make sentences that he understood. When he started the school year, he worked individually with a teacher in the Mechinah (preparatory) program. He progressed so quickly that by Thanksgiving he had joined the novice-level class with several of his seventh grade classmates and held his own in that grade-level class. He now speaks to me in Hebrew. He isn’t fluent, but he’s enjoying practicing the language and becoming more fluent on a daily basis.

How would you describe your Jewish identity?

Both my husband and I have strong Jewish identities, though they are different. My own Jewish identity is wrapped around my relationship with Israel and my studies of history and memory. For me, being in a community is important, but that community is in some ways quite specific. I look for opportunities to learn and interrogate Jewish thought through innovative perspectives, and I value creative ways to access Jewish practice and thought. I don’t attend Shabbat or holiday services regularly; rather, I find being around people with similar points of reference to be fulfilling.

Has anything about JCDS surprised you?

Being at JCDS has definitely filled a void. JCDS has provided Benjy with a loving Jewish community that he could access daily, and not just in short bursts. I knew that his relationship with his camp friends was deeper than his relationships with his public school friends, and with JCDS he could find those sorts of friends and community every day.

Has being a part of the JCDS community changed any of your family practices?

Our family now consistently makes Shabbat on Friday night, whereas before we were more sporadic about greeting Shabbat.

What has been an impactful experience from the year thus far?

It’s very difficult to choose only one experience to discuss because there have been many. One particularly lovely experience was around Benjy’s bar mitzvah. Though he had learned his Torah and Haftarah portions from our synagogue, Benjy was able to bring more to his experience as a bar mitzvah after having learned more about Judaism. His conversations with the cantor included philosophical discussions of learning approaches and deeper understanding of the content he was working with. At the same time, Benjy worked with Jonah Peretz-Lange, middle school Judaics teacher, on his d’var Torah, learning how to deepen his own inquiry into the text and ask different kinds of questions. Also, the fact that he had an in-school ceremony in the midst of the pandemic when nothing else was in person was a beautiful accompaniment to his synagogue bar mitzvah that was entirely over Zoom. JCDS’s care toward the lifecycle and maturation of the individual students shone beautifully in that moment.

Karen Siegel is director of admissions for JCDS. This article originally appeared in Nitzotzot (Sparks) and the 2021 Annual Report.