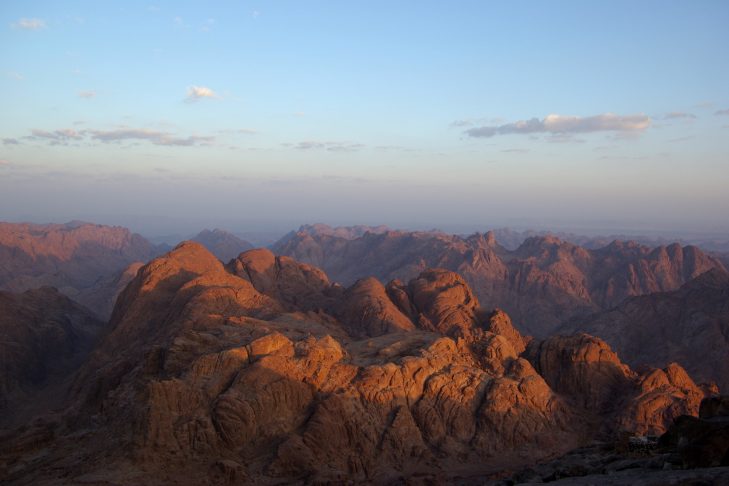 This week’s Torah reading gives us the opportunity to reflect upon the value of distance, as well as closeness in our relationships, even with the Divine.

It centers on the climactic moments of the Mount Sinai revelation, a paradigm for Jews of a direct encounter with the Divine. Rabbinic tradition does not speak of the “Ten Commandments,” but rather of the aseret ha-diberot, the “Ten Utterances.” This term hews closer to the Torah’s own language elsewhere—Exodus 34:28 refers to the covenant of the ten devarim, rather than mitzvot. In addition, the rabbinic language here may reflect tensions with nascent Christianity, whose elevation of the eternal validity of the “Ten Commandments” accompanied a denial of the same to other commandments of the Torah, a clear anathema to rabbinic Judaism.

Yet the title the “Ten Utterances” also emphasizes what is unique about those mitzvot that were imparted from Mount Sinai: the Divine voice that spoke them was heard not only by one prophet, but by all of the Israelites (Deuteronomy 4:12 and 4:33). Mount Sinai thus becomes the model for intimacy and nearness with God. Rashi (Song of Songs 1:2) compares it to a Divine kiss, which, having once experienced, we long for again and again.

However, the parashah takes its name from a very different encounter—that of Jethro with his son-in-law, Moses. In fact, while the Mount Sinai story is about connection between the people and God, the episode with Jethro is about the need to create distance between the people and Moses. The text also provocatively frames this as a kind of distancing of the people from God.

Essentially, Moses’s father-in-law advises him that it is impossible for Moses to respond personally to all the issues and questions of the people. He must, instead, set up a hierarchy between himself and the people, such that only some individuals and especially-difficult cases rise to the level of direct involvement with Moses. When Moses’ father-in-law asks him why he is responding directly to people’s concerns all day, Moses tells him:

כִּי־יָבֹא אֵלַי הָעָם לִדְרֹשׁ אֱלֹהִים
It is because the people come to me to seek God (Exodus 18:15).

One can almost hear Moses asking, between the lines, “How can I turn them away?” Yet, of course, Jethro’s objection seems difficult to refute. Moses’s current model is simply unsustainable: “The thing you are doing is not right,” Jethro states bluntly, “you will surely wear yourself out, and these people as well” (18:17-18). Moses accepts this advice and duly sets up a hierarchy between himself and the people.

What is the message of this story for those of us who “seek God” and desire a direct encounter with God, or a face-to-face meeting with a great prophet who can speak to us God’s word? It seems that these must be sacrificed for the sake of creating a sustainable institution. This system will be administered by the authorities enumerated by Moses in Exodus 18:25. But these “officers,” even as we hope that they act justly and with integrity, are no prophets.

Hasidic texts often read such political texts in terms of the inner lives of individuals. Thus, in his Torat Emet, the Hasidic master Rebbe Yehuda Leib Eiger (1817-1888, known as Reb Leibeleh) sees the encounter between Moses and Jethro as an opportunity to reflect upon the devotional life of an individual. Reb Leibeleh is struck by the language of the verse, which describes Jethro as Moses’s friend (re‘ahu, in Shemot 18:7). He asks: How did Jethro merit such a title in relation to the greatest of all prophets?

Although this is, in my opinion, a rather forced question, his response is very profound. (This combination is not infrequent in Hasidic literature.) Precisely because Jethro, who we met as a non-Israelite priest of Midian (Exodus 2:16), has been far from the God of Israel, the greatest peace and profoundest friendship is exemplified by his union with Moses. Reb Leibeleh quotes God’s words to the prophet:

Here, “shalom” is related to peace, though the root meaning is that of wholeness. Reb Leibeleh tells us that Moses is “the near,” a tzaddik who experiences unparalleled closeness to God, while Jethro is “the far,” a ba’al teshuvah. The opening of the parashah celebrates the fact that Jethro, from afar, has heard and understood some of the revelations of God, and has drawn himself closer. Although Moses is glad to see his father-in-law, rejoicing that Jethro has seen the value of drawing close, he perhaps does not initially realize that Jethro has something to teach him, too: the value of distance.

In Moses’ experience, one who is seeking God needs to have a quick and direct response from the Divine. For instance, when Moses is presented with questions that he cannot answer—as in the case of the daughters of Zelophehad—he asks it of God and receives a response (Numbers 27:1-11).

For Jethro, on the other hand, God is the One who, rather than giving answers, gave him the space to wander long and far in his God-seeking. The midrash states that Jethro had engaged in every form of idolatry before finding the One God. Perhaps from all of these experiences, Jethro learned many lessons—including the irreducible value of the religious quest itself, for all of its challenges and heartaches.

Read existentially: Jethro is the part of us with the awareness that one who is “seeking God” needs to be given space, not only answers. Yet we do also need those Moses moments, in which we feel a real response and encounter. Imagining Moses and Jethro’s embrace, Reb Leibeleh sees the wholeness of a doubled “shalom” that embraces equally the near and the far, the moments of direct response and encounter as well as the endless quest.

Jethro’s advice was not merely of a practical nature—a concern that the people will be “worn out,” as a vine will wither from too much sun. Rather, he understands that human growth requires the warmth of the Divine presence, as well as the air of freedom and space that God grants us, as in the great Luranic teaching of tzimtzum, to find and become ourselves in our ongoing search for the Divine.

Rabbi David Maayan is completing his Ph.D. in comparative theology at Boston College. He received an MA in Jewish studies from Hebrew College, with a focus on Hasidism, in 2017. He has also taught courses in the Hebrew College Rabbinical School and in the Prozdor teen program.