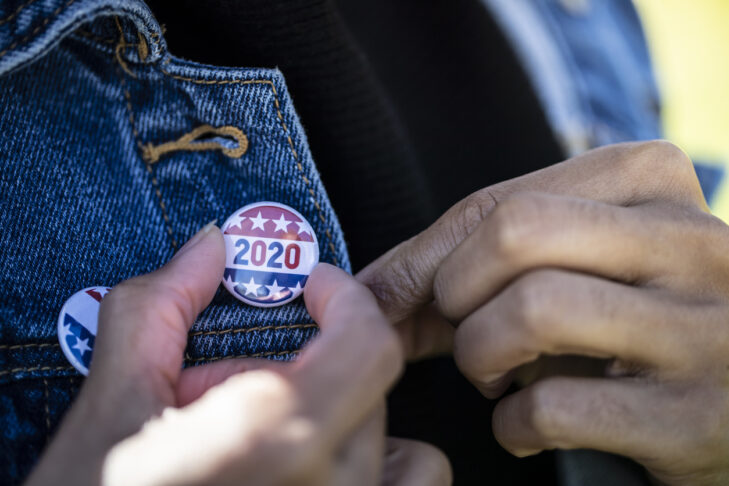 There is something to be said about being Jewish and feeling obligated to act—give us a cause and we are there, in carefully organized and coordinated intergenerational groups of young people, folks in the middle and, of course, bubbies. We show up when there is a need, ready, willing and able to push back on systems of oppression. In our minds, David can and will always defeat Goliath, no matter what form the giant takes. This sentiment mobilized and fueled the efforts of hundreds of JALSA volunteers across Massachusetts to stand and face the new Goliath.

In 2020, Goliath has taken on multiple forms, the most insidious of this being voter suppression. Voter suppression poses an existential threat to our democracy and our world. It silences millions, paving the way to the backburner for the policies we need to effect inclusive and meaningful change. Some of these disenfranchised voices come from voters who look like people in our own Jewish community, and share a common cultural, racial and socio-economic background. We are Brown, African American, Latinx, immigrants, poor and working class, disabled, elderly and forgotten.

What does voter suppression look like? Purging voter registration lists, limiting early and absentee voting, proliferating disinformation by giving voters false information about polling locations, election dates and local voter procedures, declaring legally registered voters fraudulent due to voter relocation and imposing strict photo ID requirements on voters lacking a valid driver’s license. According to the ACLU, these ongoing strategies of voter suppression are estimated to have reduced voter turnout by 70% in the state of Georgia alone.

In 2020, there is another tactic at play—casting doubt on our elections—using social media and political rhetoric to undermine the credibility of mail-in ballots that millions of Americans are using to vote for the president and Congress because people are afraid to go to polling places. And, once our votes are cast, there may very well be efforts to prevent the accurate tallying of ballots before every vote in this country that was legitimately cast has been counted.

Why does the Jewish community need to fight voter suppression? Beyond the ever-present need to push back on any and all coordinated efforts to undermine the democratic process of our nation, if we do not fight voter suppression, we could find ourselves living in a world where justice is replaced by oppression and equality is forgotten. We believe in voting because no person or group has the right to impose their own political ideology or policies on us outside of the democratic process on which this nation was built. We support the vote because the American Revolution was fought against the tyranny of absolute rule. And, finally, we passionately believe that the voice of every individual deserves to be heard.

That is why, starting in March 2020, the Jewish Alliance for Law and Social Action (JALSA) decided to organize the Massachusetts Jewish community in an effort that has now reached over 150,000 voters in suppressed states. Bringing together over 1,250 volunteers and involving 19 synagogues, JALSA cultivated collaborations and stewarded meaningful opportunities for our “action takers”—working to register voters, getting them absentee ballots and making sure they had voting plans. JALSA’s mission—engaging the Jewish community in promoting civil rights, protecting civil liberties and pursuing social, economic, environmental and racial justice—depends on the success of this work.

In the ancient story, David had a sling and stones, and that was all he needed to defeat the most threatening menace to the peace of his community. In our modern day, our phone calls, texts and postcards to people throughout the country are the stones we will use to fight back against voter suppression and uphold the dignity of every voter.

Maria Isabel Rosario is a member of the Greater Boston Jewish community and is working to implement JALSA’s anti-voter suppression effort.

Cindy Rowe is executive director of JALSA, which pursues social, economic, environmental and racial justice based on Jewish values.