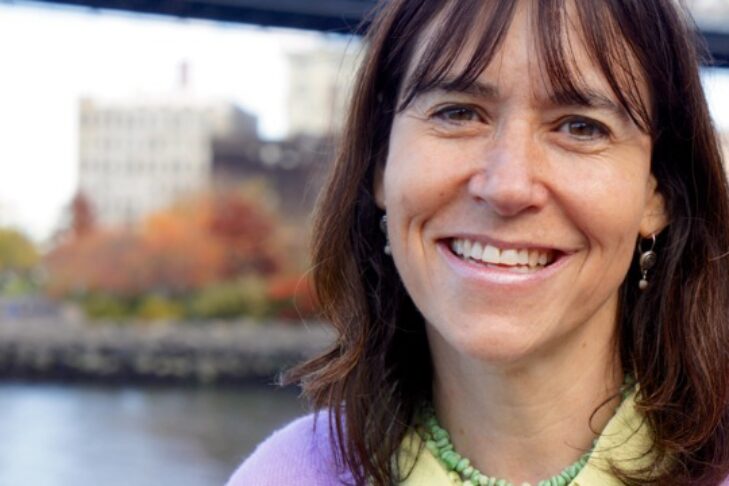 Lisa Gossels, the new artistic director of Boston Jewish Film (BJF), says her favorite word is “community.” In her role, she hopes to bring together filmmakers, films and audiences to deepen community. “BJF has so many incredible partnerships,” she said. “There are also so many wonderful film festivals, educational and cultural institutions and nonprofits in Boston. Our communities are so rich and diverse.”

The notion of community has also suffused Gossels’s work as a “social-issue documentarian.” She has produced and directed two acclaimed films: “The Children of Chabannes” and “My So-Called Enemy.” The first film tells the story of people in a tiny French village who banded together and chose action over indifference to save 400 Jewish refugees during World War II. The second film follows six Israeli and Palestinian women, teenagers at the time, as they came together to participate in a program called “Building Bridges for Peace.”

Gossels noted that her films screened at the Boston Jewish Film Festival in the late 1990s and early 2000s. They reflect her ongoing intention to integrate social justice issues and Jewish memory in films that are also entertaining. “I’m drawn to stories about possibility and hope, stories about truth, stories that are authentic and not exploitive,” she recently told JewishBoston. “My favorite review of ‘The Children of Chabannes’ was not that it was about the mystery of evil but about an equally awesome subject—the mystery of good. It was about people embracing refugees. With ‘My So-Called Enemy,’ I wanted to shake up narratives and stereotypes. Some of the girls from that documentary are still in my world. I started making the film when they were teenagers, and they’re in their 30s now.”

Throughout the years, Gossels has kept tabs on what films have been picked up by the festival and other Boston Jewish Film programming. She heard about the BJF position while she was waiting out the pandemic in her hometown of Wayland. Her journey to the Boston area started with a four-day visit to check in with family that expanded into a two-year stay. “When I read about the job of artistic director on the BJF website, every single line of that job description aligned with my passions, skill sets and interests,” she said. “It was purely creative and a very generous opportunity.”

Although she lived in New York City for over two decades, landing in Boston as a respite from the pandemic turned into a joyous homecoming with exciting prospects. “Coming from New York City, which is an incredible place, there’s something very special about being in the Greater Boston community, which is relatively smaller,” she noted.

While it’s still early in her tenure, Gossels expects to deploy her storytelling skills to teach in the Boston community. Throughout her career, she has conducted workshops that focus on the art of filmmaking, storytelling and interviewing. “I do a lot of work around identity and interfaith/multifaith work,” she said. “One of my workshops is called ‘Everyone Has a Story,’ and another is ‘Don’t Make Any Assumptions.’ In our society, there’s a lot of black and white around social media. We live in a world with a lot of complexity, and my workshops are about being in conversation around those issues. I also have workshops about the best practices around personal storytelling and filmmaking itself.”

Gossels intends to migrate some of the material she has created for her workshops to BJF’s initiative to combat antisemitism in schools. A long-term goal is to be in the classroom and also replicate the initiative for as many schools that wish to participate. She and her colleague Joey Katz, BJF’s director of special programming, have been collaborating on what a workshop or curriculum exploring antisemitism through film will look like. “The Children of Chabannes” will be among the films that will be shown. “My So-Called Enemy” will also be screened as an example of the importance of humanizing people. Gossels noted that she also wants to continue to explore “the kind of antisemitism related to Israel and Palestine.”

Gossels and Katz have started considering films for the 2022 Boston Jewish Film Festival in the fall. As part of their due diligence, they are tracking films currently receiving funding and reading reviews in trade publications of what has been screening. “This film community is my community,” she said. “I’m aware of films in production and we’re requesting screenings. There are also many issues we care deeply about, and we care about representation. We’re thinking about Holocaust remembrance, LGBTQ issues and LGBTQ love. We have a very clear vision, and we know when we’ve seen a film in concert with that vision.”

Gossels said her new job comes with “the privilege of creating programming that brings people together as they transition from a pandemic to an endemic.” She wants films to reflect this unique and, in many ways, traumatizing time the world has been through for the past two years. “We have a wonderful team, staff and board of directors at BJF who care so much about films and the issues they raise,” she said. “We’ve been talking about responding to what’s happening in Ukraine and are looking to screen films on the subject, as well as support organizations, including World Central Kitchen. We want to reflect what’s happening in the world to be relevant.”