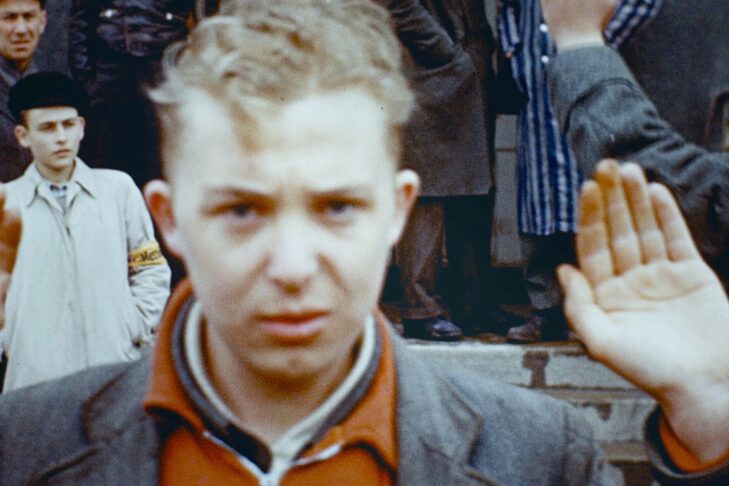 Luke Holland’s quietly devastating documentary “Final Account,” which premiered at the Venice International Film Festival in September 2020 and is now streaming on Netflix, brings together German and Austrian octogenarians and nonagenarians who participated to varying degrees in the Nazi genocide of the Jews. Some were bystanders, others were bureaucrats and some were SS officers. Still others were citizens who betrayed Jews in hiding. Collectively, they exemplify Hannah Arendt’s famous concept of the “banality of evil.”

The title “Final Account” uncomfortably echoes the phrase “Final Solution,” while at the same time implying that this was Holland’s last opportunity to get these testimonies on the record. The “account” in the title conveys two obvious meanings—one is to chronicle and authenticate, and the other suggests holding these individuals responsible. In each frame, Holland telegraphs the urgency of his mission given the advanced age of the interviewees and the fact that Holland, who had Jewish family that perished in the Holocaust, was himself terminally ill with cancer. It took him 12 years to make the film, and he died a few weeks after the documentary was completed.

The film opens with writer and survivor Primo Levi’s observation on the dangers of “functionaries ready to believe and act without asking questions.” As Levi noted, these people were not monsters but ordinary people turned dangerous when they became cogs in the Nazi machinery. One of the stark examples is the amiable old man who returns to his family farm near the Bergen-Belsen concentration camp. He points to the hay loft where he discovered Jewish prisoners who had escaped the camp, remembering that they had begged him for food before the guards recaptured them. Under direct questioning, the man admits that it was he who notified the guards. And as to the prisoners’ fate, he merely shrugs and says nobody knows what became of them.

Another man who witnessed Kristallnacht as a soldier says it didn’t feel like a crime to burn a synagogue. Old women in a rest home matter-of-factly recall that burning skin produces a lot of smoke and gives off a sweet smell. Another man declares that the SS had nothing to do with the Holocaust. Others backpedal and say they didn’t know what was happening. If they knew, they would have acted differently. Yet their awareness or complicity rarely approaches remorse.

In one particularly egregious interview, a man named Karl Hollander, who appears as if he is about to draw his last breath, declares that he still honors Hitler and doesn’t blame him for any war crimes. Hollander grudgingly concludes that maybe the Jews should not have been killed, but they definitely deserved to be driven out of Deutschland.

Although these elderly interviewees dominate the film, Holland assiduously creates the historical context of how a madman essentially brainwashed citizens of entire countries. In Germany, antisemitic indoctrination took root a decade earlier as Hitler rose to power in a bad economy. The erosion of a civil society began in earnest with targeting young people. Hitler Youth created a camp-like atmosphere featuring sports, games and songs. The recruits had a sense of belonging to something important, patriotic and noble. Holland makes that point through snippets of home movies showing happy kids swimming and frolicking outdoors.

Many of the interviewees also comment that wearing the uniforms made them feel important. Recruiters for the SS focused on drawing in young, athletic men keen to prove their grit and determination. At one point, someone describes a child’s alphabet book filled with caricatures of Jews with hooked noses. Someone else remembers traveling troupes that showed antisemitic films in villages in which attendance was mandatory.

Holland’s interviews also piece together an economy that used slave labor to boost business for butchers, bakers and grocers. Overall, these actions created an atmosphere lacking morality and basic humanity. Neighbors, tradesmen and even the educated elite gradually slipped into a pattern of willful denial and blinding hate that led to heinous crimes. And as Holland repeatedly shows, these same people knew what was happening around them. To sharpen the point, he includes archival footage of notices as commonplace as traffic signs announcing that Jews were forbidden to sit on park benches, take public transportation or shop for food beyond an imposed curfew.

In another scene, an aged interviewee openly doubts the veracity that 6 million Jews were killed in the war. It’s all the more chilling to realize that the man is not alone in his thinking. This makes the timing of Holland’s documentary all the more crucial in light of a recent statistic that nearly two-thirds of American young adults were unaware that 6 million Jews died in the Holocaust. Additionally, 15% thought holding neo-Nazi views was acceptable.

A pivotal moment in the film occurs at the site of the 1942 Wannsee Conference, where Nazi officials laid the groundwork for the Final Solution. A former SS member, Hans Werk, meets with a group of young students at the villa and tries to explain that the Holocaust was not only an aberration but also an extreme betrayal of German values. He conveys to these young people his shame in participating in the German war effort.

One of the students confronts Werk and asks him why he “does not stand up for the Fatherland,” and why he doesn’t condemn “some Albanian stabbing you on public transport,” rather than his fellow Germans for something that may not have happened in the distant past. The unresolved screaming match that ensues startles in a film that otherwise derives its power through restraint. By the same token, Holland’s interview methods are never aggressive, but they procure eyewitness accounts that exemplify the “banality of evil” and are ultimately shattering.