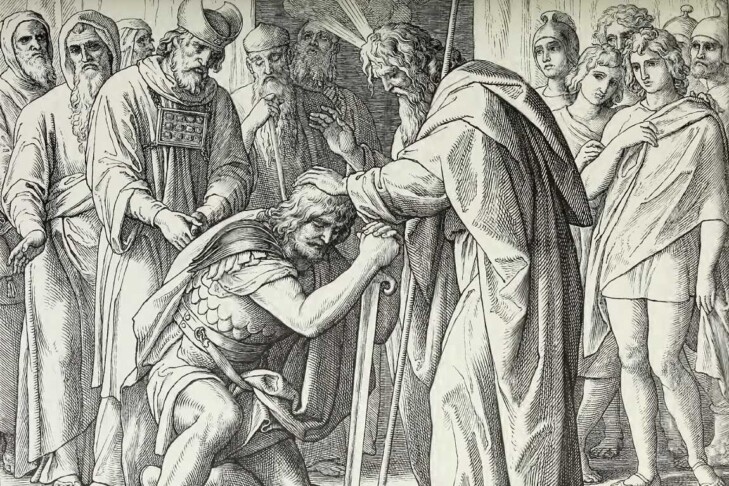 The transmission and transition of leadership from one generation to the next is ritualized in Parashat Pinchas. Moshe stands Joshua before Elazar, the High Priest, and before the entire male Israelite community. He lays his hands on Joshua in the original act of semicha, symbolically placing leadership on his shoulders. According to the 19th-century rabbi Naftali Zvi Yehuda Berlin (known as The Netziv), through this act of semicha, Moshe filled his student like a vessel with his wisdom. Before standing on the shoulders of giants, Joshua felt the giant’s hands rest solidly on his shoulders.

When semicha occurs only through official, state-sponsored channels, the possibilities of leadership are greatly limited. Only those whose shoulders the establishment deigns to touch will receive investiture.

For those standing outside of traditional halls of power, semicha must be conjured and claimed, shored up, from sources within and sources divine. Parashat Pinchas codifies this kind of semicha too. For in the scene before Moses places his strong hands on the shoulders of his protégé, five sisters known as Bnot Zelophechad (the daughters of Zelophechad) claim their own semicha.

The sisters knock on the door of the ohel moed, the ultimate hall of power. They approach וַתִּקְרַבְנָה (vatikravna), the male heads of state. The Israelite leaders go silent. Has a woman ever before entered the tent of meeting? Unprecedented. Awkward. Whereas Joshua is stood (by Moshe) before the high priest and the people (וַיַּֽעֲמִדֵהוּ), the five sisters stand themselves וַתַּעֲמֹדְנָה (vata’amodna) and stand their ground—not only in front of Moshe. The text repeats the word lifnei (in front of, facing) three times, since standing before each group of leaders is its own feat. They stand facing Elazar the priest; facing the princes; facing the whole male Israelite community. They approach, they stand, they do not turn away.

Only then do they speak. Each of them speaks; they take turns.

Our father died in the wilderness… And he didn’t have sons. Why should the name of our father disappear, just because he doesn’t have a son? Give us the portion, amongst our father’s brothers (Numbers 27:3-4).

No one placed their hands on Bnot Zelophechad’s shoulders. No one bestowed power or authority—it was expressly denied them. They take the greatest risk of all. From where is their semicha?

According to a contemporary midrash by Rivka Lubitz in Dirshuni, before they approached the male authority, Bnot Zelophechad approached each other. They gave each other permission and courage. They gave each other semicha. When their father was alive, they could never have done this. Their father’s name, Zelophechad, loosely translates as “the shadow of fear.” While he lived, they existed under his shadow of fear. And after he died, you can imagine the long shadow that fear cast. Only when they looked to each other, listened to each other, took counsel with one another, could they access a font of courage; to step out of the shadow, and to stand—as a collective—in the halls of power.

Lubitz builds on a classical midrash, from Sifrei, which describes the sisters coming together in a remarkable conversation: When they first heard that the cities and neighborhoods of Israel were to be carved according to the men of each tribe and not the women, they took counsel with each other, and said, “We know… God’s compassion is not like the compassion of human beings. People implicitly favor men over women. Not God. God’s compassion extends to men and women equally, the Divine does not give preferential treatment nor discriminate.”

According to Sifrei and Lubitz read together, the sisters approach the room full of male officials, with semicha from each other and from God. With that kind of semicha, מִמִּי אִירָא, whom could they fear?

Why does the scene of state-sanctioned power transfer immediately follow The Zelophechad Five’s entrance to the ohel mo’ed? According to our rabbinic ancestors, when two scenes are adjacent, we glean Torah from their proximity through a tool known as semichut parashiyot—the juxtaposition of scenes.

Here, the semichut parashiyot points to a time when those strong enough to claim their own semicha are recognized and invested by institutions of power. It points to collaborative leadership between Joshua and the five sisters, Machla, No’a, Hogla, Milka and Tirtza, who lead society out of the shadow of fear. The rabbis say that Joshua’s power was his ability to connect with everyone, to listen to everyone. Where could he have learned this except from Bnot Zelophechad—who knew how to listen to each other, and how to stand and face any human being, any injustice, with semicha from the deepest Source?

Jessica Kate Meyer served for the past four years as rabbi-hazzan at The Kitchen in San Francisco, and before that at Romemu in New York City. She was ordained by Hebrew College Rabbinical School in 2014 and strives to build community through prayerful music, and music through prayerful community. You can listen to the album she recently recorded with The Kitchen here.