Close
Never miss a great event again!
Get the best Jewish events delivered to your inbox every Thursday with JewishBoston This Week.
By signing up, you agree to our Terms of Use and Privacy Policy.
I Got Married in a Pandemic
View all 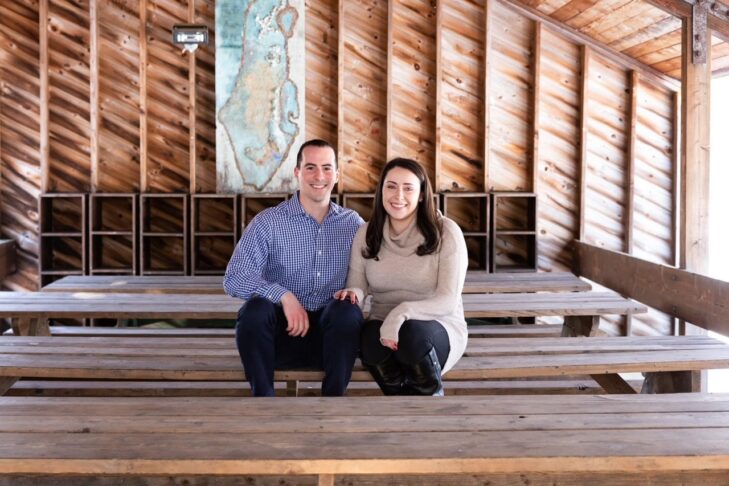 It’s the stuff of throwback summer movies: Meira Kruskal and Josh Penzias met as camp counselors in 2010. A spark wasn’t immediate, but they returned the next year, hit it off, went out for ice cream—and last Sunday, they got married at Camp Grossman, where they first made friends over a decade ago.

Kruskal, a guidance counselor at Natick High School, shared the details of their romance before their wedding weekend.

Take me back to the beginning, pre-romance. When did you start at Camp Grossman?

I’ve been at Camp Grossman since I was 5. My parents started sending me when they needed something for me to do over the summer, and they picked Grossman certainly for the Jewish programming and the activities, transportation—all of it was great. And I loved it. Once I was old enough to have a say in my summer plans, I kept wanting to go back. So I did 10 years as a camper right up through the CIT program, and after that I was hired as a counselor and never left. Now I’m an assistant director.

And what about your fiancé?

I think he was just looking for a job!

Was this love at first sight? Classic summer romance?

We overlapped as counselors in the same group for two summers, in 2010 and 2011. The first summer, we operated in different circles. We didn’t hang out very much. We worked in the same group, but it wasn’t a fast friendship. The second summer, in 2011, it was just a very different dynamic with the staff and our group. The whole group just kind of clicked, and there were times the staff hung out outside of camp, and I think Josh and I just started to gravitate toward each other a little bit. And then he asked me to go for ice cream in Newton Centre, and I said yes. At this point, we were both in college. Josh was 19, and I was 21.

Where did you go for ice cream? This is important.

What’s your advice for people in long-distance relationships? 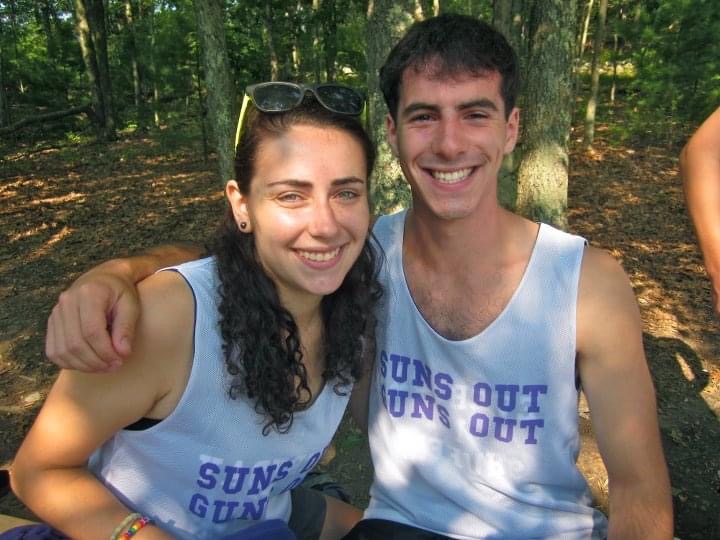 Were iPhones around then? I’m old.

We definitely were texting. I think it was when iPhones were starting to be a regular thing that everybody had. FaceTime certainly wasn’t a thing. We also did a lot of letter-writing to each other, especially in that first year when we were both in college, and care packages. So that was something I think was really special—different than a text and just a little bit more personal in a different way.

Talk to me about the proposal!

I graduated first and came back to the Boston area. Josh was still in Pittsburgh for the following two years. After Josh graduated, he moved back to Boston as well. I started a master’s program. We moved in together about five years ago, in 2016, and he proposed in 2019.

I was actually at camp for a day of tours. I was just walking around camp, and my sister—she also works at camp—said she’d left her water bottle down at the beach, and would I mind grabbing it with her? And as we walked down to the beach, I see a guy standing on the beach who looked to be dressed formally. And sure enough, it was Josh in a suit! We met at camp, he proposed at camp and we’re getting married at camp.

Was your planning affected by COVID-19?

Obviously, our plans have shifted due to COVID. Initially, we had planned for January of this year, and we both come at COVID from a pretty cautious perspective. So we were not banking on doing anything indoors in January. We knew we would have to reschedule, and our original venue was quite booked already for this summer. And given that our engagement has been a little bit longer, we didn’t want to push it out further. So that brought us to seeing if getting married at camp was a possibility because it’s just really special to us.

My director was fabulous and excited. We are working with a wedding planner who has been fabulous every step of the way: Grounded Events. We kind of had to shift perspective a little bit. But now that the weekend is here, we’re both really excited, and the vibe at camp is really exciting. Everyone’s chatting with me about it. It’s a community. It does feel like a family here. We have about 100 people coming, and several people from camp who are important to me.

Do you think there’s something special about camp in terms of forming relationships? What is it about camp that creates those lasting bonds?

All of us who work at camp have these very special friendships, because it’s a really fun place. It’s a place where I think kids get a chance to feel successful and relaxed and excited in a way that’s different from the rest of the year. And I think summer friendships just have something about them where you can not necessarily see somebody for the other 10 months of the year—but then summer starts again. I would never imagine spending my summers doing anything else.

Jewelry, because I love making friendship bracelets and doing lanyards!