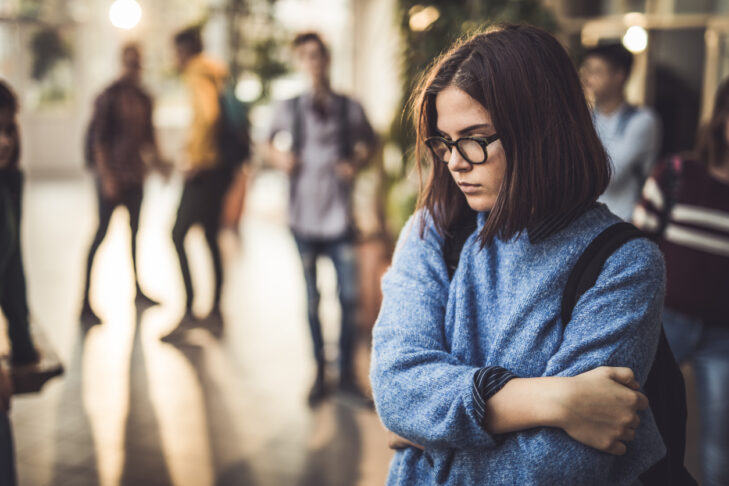 But kids are also tormented in more insidious ways, which are becoming increasingly apparent with the coronavirus quarantine. For example, a lot of parents have reached out recently asking me to talk about pods and exclusion. Cliques are awful anyway, and now they’re almost socially condoned, fueled by the pretense of safety.

Sometimes parents engineer these groups—you partner off with your own adult friends and then your kids become friends, too, and on and on. What about kids whose parents are quiet, introverted, busy or socially inept? What happens to them? Or what if you just haven’t found your group yet? Not everyone has a perfect neighborhood “tribe” (I hate, hate, HATE that term; it reminds me of gaudy throw pillows from Target).

Or what if you don’t know how to reach out and make new friends as an adult? It’s awkward! At what point do you go from casual drop-off/pickup acquaintances to legit pals? Is there some kind of ceremony?

The pandemic has underscored alienation for so many people. My son has a classmate who often asks him to ride bikes, but he never, ever wears a mask. Yet he shows up at our house begging to ride, and he sees my son out front playing with his (masked) best friend. Why can’t he join? I have to turn him away. I usually offer some quickie excuse, a “maybe some other time brush-off,” but the truth is, I don’t trust him to stay safe and distanced. But how do you tell that to a lonely kid? Then I spend the day worrying that I’ve hurt his feelings.

What concerns me most is the lasting impact these social interactions (or lack thereof) will have on our kids down the line, how they will affect their adult self-image. I was talking to my own best friend yesterday about a therapy called Internal Family Systems, where you nurture your wounded inner children—each of us might harbor many of them from different life phases—who were hurt long ago.

Here’s an example: I am a plan initiator, even though at heart I’m a bookish introvert. Part of it really is my nature; I’m instinctively outgoing, organized and talkative. But there’s a small part of me, a buried shattered part, who is 7 years old. I wore big brown plastic bottle-cap glasses and was an only child (until my brother came along in third grade) who felt more comfortable with adults. I was, um, socially awkward. I was horrific at gym. I didn’t play soccer like the coolest girls, and I definitely wasn’t luring in the boys with my spectacles and argyle sweater vests from Decelle’s in Lexington.

I spent a lot of time feeling like an outsider who missed the memo, clinging to my middle-of-the-pack social status for fear of being relegated to the deep-dork lunch table. There was a separate nerd clique, and I would do anything to avoid their fate. I spent my elementary school years on the cold edge of the cool-kids cafeteria table, desperately trying to fit in and duck ridicule. When I had a bad day, when I did feel excluded, I would slink home in tears—ruined! I still remember it: There was an ice cream social, and kids had paired off to eat their sundaes, six per table. Parents were invited, too. Lo and behold, guess who was the seventh odd kid out? Yours truly, enormous glasses fogging up behind a heaping portion of Frosty Corner soft-serve.

I remember scanning the cafeteria like a frightened forest creature, sundae dripping down my wrists. Where could I sit? Everyone had found a home except for me. So I plunked down on the edge of a table next to two “cool” moms, full-on 1980s hair and big ole jewels. They didn’t help me to find a seat. They didn’t even move over. They looked at me like I was an infected spider, laughed, and kept right on chatting.

I vowed that I would never, ever be left out in the cold like that again. I spent junior high and high school compensating for that elementary-schooler; a friend and I even drew a social diagram to figure out how we could climb from “6.2” on a coolness scale to “8.” (I’m looking at you, Meg.) Shiver.

I’m 41 now, and somewhat more mature. That said: There’s a part of me who harbors gnawing pangs of FOMO, who winces when I see a group of friends hanging out on social media (or in real life!) and I’m not there. What did I do? Have I been found out? Exposed? Forgotten? Sometimes it even makes me cry like a child, bile rising in my throat, and I’m a goddamn adult! I only tell my husband—well, and now all of you—but the hurt feels as real as it did in 1986 at C.T. Douglas School in Acton, Massachusetts.

We’re creating those hurt children now, with tiny, socially acceptable exclusions. The pandemic makes all of this worse for kids. Social media, too. At least I could just go home and read my Anastasia Krupnik books in relative peace. Now we know exactly what other kids are doing, all the time, and pairing off socially is actually accepted for public health reasons.

I truly wish parents took more responsibility for this. Sure, I think in some ways the world is way nicer than it was in the 1980s, when I was growing up; I can’t even imagine having a social-emotional “curriculum” in fourth grade, the way my son does.

But age-old routines persist. We do what’s familiar. We get into social ruts. We fall into patterns. We forget to look out for the shy kid, the quiet kid. We know that outright bullying is wrong, but some kids fly below the radar and suffer micro injustices every single day without being assaulted or harassed. And they will carry that hurt with them for a lifetime, too.

So, with my son, I’m going to be mindful of inclusivity. Of asking him which kids might seem sidelined and reaching out for a play date. No, I can’t force friendships, but I can also do my part to model inclusion when possible, even if it’s just suggesting a masked bike ride with a quieter kid. I think back to my own elementary-school experience, and how much an empathetic adult could have tuned in to my own anxieties and made things better for me, and I feel even more committed to ensuring that I don’t contribute to another child feeling awful.

We closeted nerds have to pay it forward.