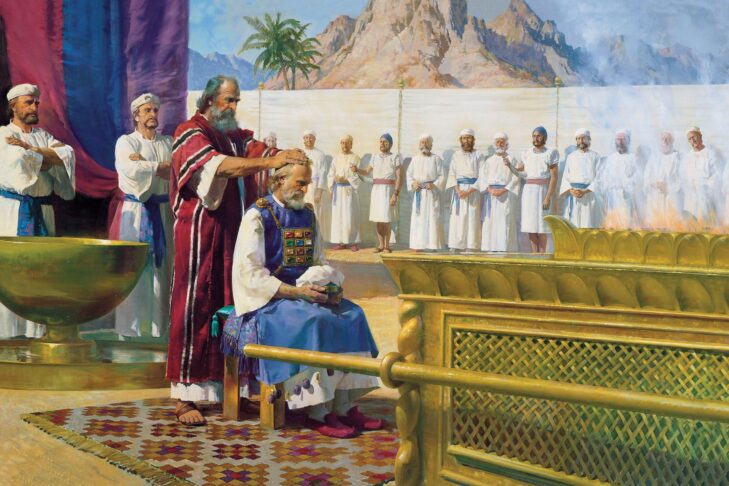 “Moses Calls Aaron to the Ministry” by Harry Anderson

In the past few weeks we’ve seen God as an architect designing the mishkan, a trip leader guiding Israel through the desert and a performance artist delivering the commandments amidst pomp and circumstance at Sinai.

This week we meet God, the fashion designer:

Make holy clothing for your brother Aaron, for dignity and adornment (Exodus 28:2).

God’s instructions about what Aaron should wear to serve in the temple are elaborate and detailed—a blue coat, an elaborately embroidered sash, linen pants and a whole host of magic jewelry.

As someone who has spent a lot of my life agonizing about what clothes to wear, this dalliance into the world of fashion, framing it as striving for “dignity and adornment,” touches a particular part of my heart. For me, coming into my power and my confidence as a person, and into my voice as an (almost) rabbi, was integrally tied with coming into my identity as a trans person, which was intimately tied with the process of finding the clothes that felt most right to wear in the world. I am a person whose body does not easily tell the world the story I want to tell, so my clothes are a key place where I can communicate my transness to the world. I still remember the first time I braved the men’s section of the thrift store, the first time I wore a button-down and slacks to shul—feeling intimidated, mustering the nerve and feeling surprisingly comfortable in clothes that finally fit and felt right.

When God hands down a detailed uniform for the priests, God recognizes the power that clothes can have for us—the way that a costume can transform what we feel capable of and what the world sees us as capable of. And the magic of all of it—of the costume in combination with the elaborate ritual—is that it gives off the appearance that Aaron’s priesthood is a natural part of who he is. In our minds, Aaron is the epitome of what a priest is.

Marla Brettschneider, in her drash in “Torah Queeries,” unpacks this illusion of inherent identity through the lens of queer theory. With regards to why Aaron was chosen for priesthood over, say, Moses, she writes: “Historically, scholars have looked for preordained ‘reasons’ that actually only they have the power to invent and legitimate since the text does not offer us any explanation. Rather than seek some ‘natural’ cause or some special trait in Aaron and his particular descendants, queer theory encourages us to understand that it is through the utterances, speech acts, and other performative gestures in this moment that the priesthood as a structure then associated with Aaron and some of is descendants is created….”

In this way, Parshat Tezaveh reveals to us the path toward constructing Aaron’s identity as a priest: it outlines the clothes and the context that will facilitate him embodying the identity of priest. By following the script, and donning the costume, and bringing himself into the role, Aaron constructs what priests are in our eyes.

In his reading of this parsha, the Malbim articulates the process of self-creation that occurs through clothes in a slightly different way. He writes: “Behold, the garments that God commanded to make were ostensibly outer garments, such that their makeup is discussed—how the craftsmen are to make them with their work. But they really indicate inner clothes that the priests of God should make—to clothe their souls with thoughts and traits and proper tendencies, which are the clothes of the soul; and the craftsmen did not make those garments.”

For the Malbim, the process of creating and donning these clothes is an outer reflection of the internal process of becoming a priest. The clothes both reflect and create him—the craftspeople make the clothes that make his body into a priest, but Aaron makes his soul into the soul of a priest.

Reading the Malbim together with queer theory, I see a cycle of self-creation where the self, the soul and the garments are infinitely informing and creating one another, blurring the lines around what is a natural or inherent identity. Is Aaron born to be a priest, or does he make himself into one? The answer: a little bit of both.

Today, we live in a time without priests, without a temple and without the vestments of service that the Torah outlines for Aaron. Our identities and roles in the world are no longer handed down from God. For me, creating myself in the image of myself—constructing a costume to wear in the world—was my own ritual, or priestly ordination. Though I didn’t land on the flamboyant and jewel-filled aesthetic that God hands to Aaron, I too found a uniform that enabled me to embody my role in the world; I too experienced the magic that a well-fitting jacket could bring out.

The final piece of clothing outlined for Aaron is a headpiece, fashioned with a gold plate that hangs on the forehead and reads “קדש לה’” (Holy for God).

When I get dressed and look in the mirror and feel whole, and feel like perhaps I’ll be legible to the world around me, I sometimes channel this headpiece. How powerful Aaron must have felt when he donned this final flourish, transforming his outsides to match his priestly insides. Or maybe he was leaning into the ritual act of getting dressed to help him feel priestly. Or maybe he didn’t know he was priestly until he put on the headpiece and it felt natural. But the sentiment that God outlines at the beginning, dignity and adornment, culminates in the holiness Aaron wears on his forehead and that I channel in the mirror: When I am able to embody dignity, to adorn myself such that I feel like myself, I become holy.

Dignity and adornment need not be found just in clothes—honor and beauty can manifest in so many different ways in our lives. But feeling beautiful, feeling dignified and feeling like the word can see that—that is holy. May we all find sources of kavod and tiferet in our lives and carry them with such ease that they appear natural. And may we all know the feeling of holiness inscribed on foreheads, imagine it engraved in gold, legible beyond any doubt.

Frankie Sandmel (they, them, their) is a student at the Rabbinical School of Hebrew College.