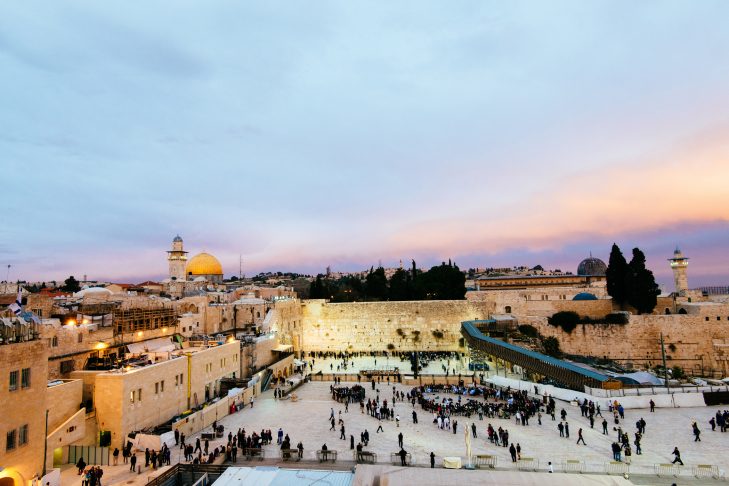 Chuck Freilich, a former deputy national security adviser in Israel, is a senior fellow at the Belfer Center and the author of Zion’s Dilemmas: How Israel Makes National Security Policy and the forthcoming Israeli National Security: A New Strategy for an Era of Change (March 2018). On Dec. 6, the day Trump announced official U.S. recognition of Jerusalem as Israel’s capital—and his intention to move the U.S. Embassy from Tel Aviv to Jerusalem—Chuck joined us from Israel to answer our users’ questions about Israel’s security.

Below are some highlights of our hour-long discussion. The entire conversation can be found here.

israel360 user: Chuck, it’s quite a day to be having this conversation. Will this Jerusalem announcement destabilize the region?

Chuck Freilich: I think there is a high probability of large-scale demonstrations, in the West Bank and throughout the Arab and Muslim world, with some violence. The question is whether it blows over in a few days, or more likely last for a while, possibly even evolving into a “third intifada.” In any event, it is likely that there will be casualties and even people killed in Israel. The U.S. move will certainly strengthen the position of the Iranians and could destabilize various Arab regimes, not just the Palestinian Authority, but Jordan and others. The Saudis and some other Gulf states could see unprecedented public gatherings, which could even get out of hand and present some difficulty to the regimes. The bigger question is what this move does for the future of the peace process. If Trump had any hopes of getting a process started, which were meager to begin with, he has probably delayed them by months at very best, and possibly killed them. There will definitely be a short to medium-term deterioration in U.S. relations with the Sunni states and with the emerging covert relation between them in Israel as well. The Jerusalem issue should be addressed as part of a final agreement, in which all sides have to make wrenching concessions. The critical concession on Israel’s side will have to be a division of Jerusalem, in addition of course to the establishment of a Palestinian state. The Palestinians’ primary concession will have to be forfeiting a “right of return.” One can be against these concessions, but in their absence there simply won’t be a deal.

israel360 user: How does this statement impact the prospects for a two-state solution?

Chuck Freilich: I think it will have a clearly negative impact on the prospects for a two-state solution. At a minimum, the Palestinians will withdraw from the talks for a few months; the damage could be longer than that, especially if there is significant violence, leading to a response on our side and to an ongoing cycle of violence. Jerusalem is a tinderbox, an explosive issue that pretty much everyone has avoided even touching to date, because it is so sensitive for all sides, Jews, Muslims and Christians. The only way to deal with the issue effectively and to do it at the appropriate timing is as part of a final settlement, when all sides are making their major concessions. I understand the importance of Jerusalem for Judaism, Jewish history, Israel, as much as anyone else, but there is a way and a timing to address every issue and this isn’t it.

“I understand the importance of Jerusalem for Judaism, Jewish history, Israel, as much as anyone else, but there is a way and a timing to address every issue and this isn’t it.”

israel360 user: Trump campaigned on calling the Iran deal the “worst in U.S. history.” What do you think needs to be changed, if anything, to make it better?

Chuck Freilich: The deal, in and of itself, is reasonably good. It has one basic failing, which is that its limitations on Iran’s nuclear program expire after 10-15 years. So the important change is to gain support of the primary international actors, at least the Western countries, behind the demand that Iran either agree to make these limitations permanent, by signing a follow-on agreement, or that the Western countries make the ongoing lifting of sanctions contingent on this. There is actually considerable international support for this; it is a reasonable position, whereas the president’s de-certification of the deal was roundly rejected by the international community as a one-sided and unwise move, which I too believe it was. In the meantime, it is of course important to ensure that Iran strictly adheres to the deal through intrusive inspections. So far they are, but that was expected, because they want to enjoy the benefits of the lifting of sanctions in the early years, but this will become increasingly important as time goes by and they have been re-integrated into the international economy. At the moment, President Trump has made the U.S. look like the rogue state, the side that is not living up to its commitments, whereas the Iranians look like the responsible side. Not necessarily a great achievement.

israel360 user: Hi Chuck, I have family in Israel; should I be worried about violence spreading outside of Jerusalem?

Chuck Freilich: The short answer is yes. The probability of an uptick in violence and terrorism is high. The question is whether it is a brief few days and limited in scale, or something that evolves into a bigger and ongoing wave of terrorism, something like a third intifada. The danger of this happening is clear; Jerusalem is the most sensitive issue there is. At the same time, put things in proportion; Israel is a fundamentally secure country today, and even in periods of heightened terrorism the statistical probability of anyone you know being hurt is extremely low. Terrorism today is a global phenomenon, in the U.S., France, Britain…pretty much everywhere. So this is a horrible we have to learn to live with.

Read the entire conversation at israel360.