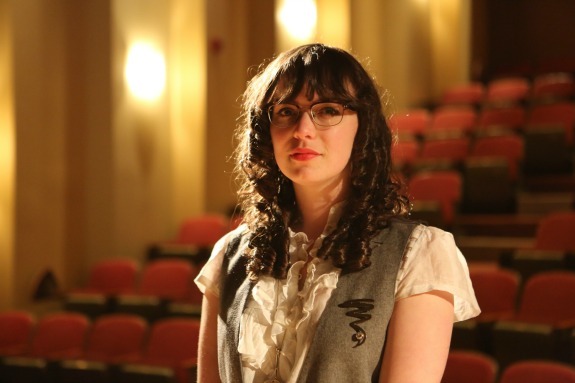 This week I had a chance to speak with playwright Cassie M. Seinuk about her award-winning play, “From The Deep,” a story inspired by two real missing people from opposite sides of the world and an imagined scenario in which the two could meet and help each other. When Cassie’s not writing, she’s the artistic director for the Boston Public Works Theater Company. “From The Deep” will be performed at the Black Box Theater at the Boston Center for the Arts from March 12-28.

Your new play, “From The Deep,” won Boston University’s Jewish Cultural Endowment Grant. How did your Jewish identity inform the writing of this play?

This play was written as part of my thesis in graduate school. I was struggling with the content because I pressured myself about addressing being both Jewish and Cuban. When I write, I prefer the feeling of it falling into my lap. That’s what’s really inspiring to me.

Israeli soldier Gilad Shalit was released in October 2012, and when I read his interviews following his release, what I found most interesting was that he played games by himself during his captivity. I immediately thought this sounded like a play. I was out and about in the world when he was released, and I remember my reaction was like, “He’s released!” But the people around me were like, “Who?” This was a story I needed to tell. It just seemed so fascinating to me. And all of a sudden it’s become, “Oh, look! I wrote a play with a lot of Jewish content!” Since writing this play I’ve been thinking about what to do for my next play, which will be about a Jewish family dealing with loss. I was very afraid to broach the topic. I have to get over that.

What are the challenges of being part of an independent theater collective?

There are a lot of challenges because we’re new. “From The Deep” is one of our first shows. It already won a few awards, which is helpful. Being part of a theater collective is about space, money and time. Winning the award from Boston University has also made a big difference.

All three of our plays are at the Boston Center for the Arts. To fund “From The Deep,” we used the crowdsourcing platform Indiegogo to raise half of our goal, with the other half coming through personal fundraising. It’s all very challenging, but all of it is doable. I work as a stage manager—that’s my love. All of this is risky, but who’s going to believe in your play more than you? It’s hard to take a chance on the new and unknowable, but who’s going to do it other than me? I have an incredible producer, Nick Medvescek. I can’t do it without him, and my other friends as well.

As a proud Cuban Jew, I’m curious if you’ve ever made it to Cuba.

I haven’t. My grandfather worked for the government under Fidel Castro as a civil engineer but fled early on. It was not easy. But even if we could go back, as my grandmother always said, “Go back to what?” It would be interesting to see the synagogues and summer camps, but it’s not what it was. I’m more interested in traveling to Israel.

I’m sure I’ll go to Cuba, but it’s not at the top of my list. I have friends who have gone on missions and I’ve asked what it was like. It’s not like the stories and photos you see. It sounds kind of frightening. The synagogue in Havana holds the medical supply closet.

Do you have a mainstream art love?

I actually don’t see a lot of theater because I’m usually working. I feel less plugged in to larger houses. Fringe performs my work, and I work as a stage manager for the Actors’ Shakespeare Project. The places I’ve worked with are where I see shows. I’m also a visual artist. I’ve done artwork for my husband’s recording studio and I have an Etsy profile. Art is now my hobby. I’ll do graphic work for a logo or poster to keep it alive.