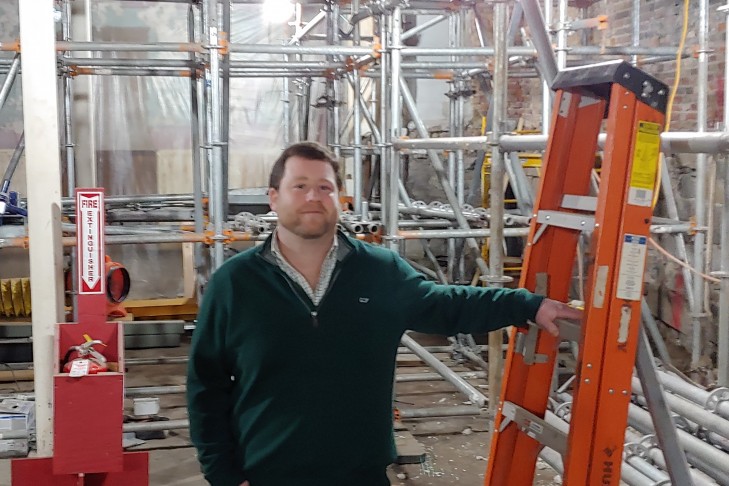 From bringing life into a dilapidated synagogue building to two decades later helping lead its preservation, David Schwarzman has quite the story.

Tell us about your current involvement with the Vilna Shul, Boston’s Center for Jewish Culture.

Currently, I am both a financial supporter, occasional attendee at events and the general contractor for the historic capital campaign restoration.

How did you first get involved with the Vilna?

I was invited to the first Havurah on the Hill, a once-a-month lay-lead Kabbalat Shabbat for young adults, approximately 17 years ago [when the building was still extremely run-down and barely habitable] and ended up joining the board as head of fundraising. We all performed numerous duties. It was a great experience building a community and helping to breathe life back into the building. I was always drawn to the building itself and its historical significance for the City of Boston. I made lasting relationships, helped build a thriving community with thousands of members and was able to raise hundreds of thousands of dollars for programming.

When I joined ZVI Construction in 2004, we performed a phase of the restoration that included a new sprinkler system, life safety and code-required upgrades to the space. We were able to help maintain occupancy for the property, which allowed the Havurah to host 300-plus person events with special guest speakers like Mayor Menino, Jonathan Kraft and Gov. Deval Patrick.

The Vilna has raised over $4 million for the first phase of its capital campaign for preservation, restoration and accessibility. What have been some of the most interesting developments that have been discovered during construction so far?

A couple interesting development include:

How does it feel to be playing such an integral role in preserving and restoring Boston’s only Jewish landmark building that you have such deep ties to?

It is rewarding to be part of the team that is restoring this building to ensure the Vilna’s place in Boston and the Jewish community. The ZVI team feels a responsibility to those who saved the structure and helped to rebuild the Vilna’s role in the community. We try not to get emotionally involved in our projects, but that is simply not the case here. I anxiously await our finish date so we can enjoy the results of all the hard work of the project team.

Learn more about the Vilna and its upcoming Centennial Celebration on Sunday, April 28, by visiting vilnashul.org.