Guy Ben-Aharon, who just turned 25, is directing the North American premiere of “Ulysses on Bottles,” a co-production with ArtsEmerson. This is the first fully staged production by Israeli Stage, the theater company Guy founded as an undergraduate at Emerson College. The production runs through April 24 at the Jackie Liebergott Black Box Theatre in the Paramount Center at Emerson.

Tell me about the new play “Ulysses on Bottles.” I’m having a little trouble wrapping my head around the title! 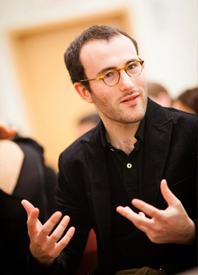 Many people won’t really get the title of the play until they see it. The plot line is about an Arab-Israeli literature professor who was arrested for trying to sail a raft stocked with Russian literature into Gaza, in violation of the travel and trade restrictions put in place by Israeli government and enforced by its military. We meet him in jail when he meets his pro bono lawyer. There are things about this play that are universal, like the way in which we make moral choices. Morality drives us so much, as it’s expedient. What we’re trying to tackle are the daily dilemmas. We all think of ourselves as moral people, and here we are buying T-shirts that have basically been produced under slave-like conditions.

You founded Israeli Stage while you were still an undergraduate student, and now there’s German Stage, plus a Swiss and French one. Are you ready to slow down yet?

Ha! Well, the French one didn’t take off, so no. I’m like a rabbi—I’m mission-driven. Because I’m Israeli, I’m closest to the Israeli stage. My aim is to create more international work in Boston and in the United States. When I studied in college, we only focused on the classics, like Shakespeare, Moliere and Chekhov, and only 10 percent of that is translated. The problem is we’re able to cast stereotypes because we don’t know the other. One way to break through is through art. It’s a way to have a sense of the other. I once went to an Iranian film festival and thought, “Really? Wow!” This is what drives me to keep opening stages and continuing to do work and not slow down, but get more help so we can grow bigger. With ArtsEmerson we have this wonderful partnership; we put away our egos and collaborate together. And we are continuing to find others who are passionate about the mission.

Israeli Stage has appeared on college campuses up and down the East Coast. Has the reception changed over the past four years?

We’re a peaceful company and we never say anything political. We say that Israel is a nuanced place. We shed light on issues: Ashkenazic vs. Sephardic, secular vs. religious. We’re not protesters ourselves. It’s been amazing to see how effective our work has been. People have been so responsive.

Are there any upcoming theater productions that you’re looking forward to seeing?

“Come Back, Little Sheba” at the Huntington Theatre. The star is a close friend of mine.