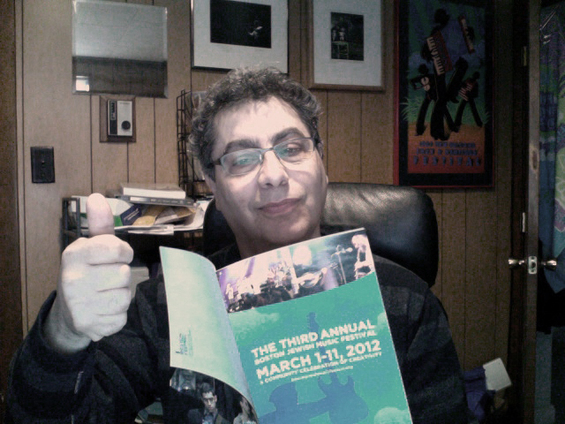 Joey Baron is the executive director of the Boston Jewish Music Festival, which means he’s probably heard more versions of Hava Nagila than a compulsive wedding crasher. But seriously, Jewish music spans a whole variety of genres, and thanks to Joey and his team, from March 1 to 11, you’ll have the chance to hear for yourself. (Check out bostonjewishmusicfestival.org for schedules and tickets.) I asked Joey about the fest and Songs of Shabbat, which brings festival musicians to local synagogues on March 2 and 9.

What makes this festival “Jewish?”

It’s designed to be a celebration of Jewish creative expression. We want both the musicians and audience to feel at home; to make the events feel as haimishe (Yiddish for “friendly and homey”) as possible. There are lots of chicken soups in the world, but you know real Jewish chicken soup when you taste it. This festival is made with our special flavor.

Someone said to me at last year’s event that they had never seen such a diverse audience at a Jewish event. We have philanthropists and beggars in the same room. The music at this festival touches all. Its Jewish roots make it a Jewish festival.

You know, I grew up in Mattapan (one of the original Jewish areas of Boston), and I want to make it a mini-Mattapan. People recognizing each other from last year and the year before, people being part of a community.

What are the origins of the festival?

The origins of this festival rest in a mid-life crisis. I spent 25 years in advertising. Toward the end I found it to be very meaningless. I actually joke that I should be the poster child for CJP. I went on a mission to Israel. I joined Me’ah. I became involved in my Jewish community. Then I met Jim Ball, and since then we’ve had 12,000 attendees of our festival. The first year we had 5,000. The second year we had 6,500. We had two events in the summer that brought in another 500 people. I have to say, no one comes out of the gate with this kind of success. We set the bar high and we created a monster. We’re even having older organizations call us for advice.

And we’re not just limiting ourselves to Jewish venues. We’re using secular venues, which make the most sense for the performer and the audience. For instance, we’re using the Somerville Theater for Andy Statman and David Grisman and Old South Meeting House for the music of Lazar Wyner.

Some Jewish cultural organizations choose to cling to their secularity. We’re not that way. Jewish music is based in the ritual of the religion, and we won’t walk away from that. We seek the music that is good enough to draw in people into the culture, and that brings the culture forward.

Could you tell me more about Songs of Shabbat across the region?

It really is about the role of music and its place in ritual that I touched on in the previous question. Last year, some of our performers asked for Shomer Shabbat (Sabbath-observant) households that would be walking distance to a shul. They said they’d even perform at the shul as a thank you to everyone who helped them with lodging. Then I thought about what an advantage it would be to the general public. We’ve had performances in Needham at Temple Aliyah. Neshama Carlebach was a Shabbaton guest at Temple Emanuel. This year, Cantor Louise Treitman has a baroque ensemble; a Kabbalat Shabbat that was written in 16th-century Italy. And last year was such an incredible success. Fifty percent of the attendees went to a shul they don’t usually go to. And 20 percent of those attendees don’t usually go on a Friday night, and 15 percent of attendees don’t belong to a shul. This is a community builder. It gets people to pray together. It gets people to go to shul. It was so successful that we have a list a mile long of temples that want to participate. Whether it’s Baroque or modern jazz, it celebrates creativity and ritual. It opens doors across the city and makes it a city-wide celebration.

All this from a single idea. And all of a sudden it has taken off, just because we needed to find people a place to stay. A hassle turned into a celebration.

If he was in the area, would Bob Dylan receive an invitation to perform at this festival?

If I had the money, I think Bob Dylan would play. We’ve asked Randy Newman, who said “no,” but he hates to travel.

Dylan has played in Israel, for Chabad, and everything in between. Barry Shrage (president of CJP) is actually a huge Dylan fan, and at every meeting we have together, he always asks, “Nu, what about Dylan?”

I think if we had the money we’d also invite Leonard Cohen. And we’d love to have Paul Simon. It’s really that their concert fees are so high, having one of those artists perform would be our entire budget. If someone sees this interview and says they want to fund it, then please give me a call!