Making homemade horseradish and cleaning out the pantry—sounds like a perfect way to prepare for Passover! This week I chat with Josh Ostroff about his Festival of Heat “food-raiser” on March 29 and his day job as a mass transit advocate. For info on how to participate in the upcoming horseradish festival, please email mollyp@jewishboston.com.

What is the Festival of Heat?

It’s a “food-raiser.” I make intense and interesting prepared horseradish just before Passover in my kitchen in Natick, and give away jars in exchange for donations to local food pantries run by the Natick Service Council and A Place To Turn. Using 30 pounds of fresh horseradish root and a case of white-wine vinegar donated by Whole Foods Market in Wellesley, as well as wonderful beets, radishes and carrots donated by Michael Docter of Winter Moon Farm in Hadley, I turn out 150 or so jars every year. Some are traditional white or red beet, but others include carrots, watermelon radish, golden, Chioggia and Forono beets, or a parsley-wasabi blend. (Yes, I have a kitchen exhaust fan!)

The Festival of Heat is a party for a great cause: no chrain, no gain! We do horseradish samplings with gefilte fish, matzah, charoset, deviled eggs, hummus and micro Bloody Marys. It’s usually invitation only, but I sometimes have a few extra jars to spare. It’s good to have a few days between the festival and Passover this year, because word gets around and I enjoy making my friends smile and cry at their seders. 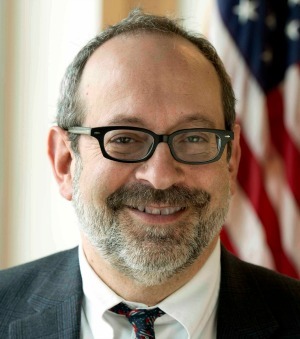 I love cooking and continuing family food traditions. My late father, Earl, used to make horseradish at home, so I’ve been doing it for years, but only started making it a charitable event about five years ago. Dad didn’t use watermelon radish, but he would have approved. Anything with heat he would be OK with! We will collect dozens of bags of groceries, along with financial donations, for local food pantries that serve many families in Natick. Hunger and poverty are very real, and our community is generous in supporting services to help our neighbors in need.

I understand that you work for a transportation advocacy group as your day job. What are you doing to fix the MBTA?

We are doing our part, but it’s going to take leadership and courage at the very top of Massachusetts state government, and a commitment by the state legislature. I’m very fortunate to work with Lizzi Weyant and Kristina Egan at Transportation for Massachusetts, a statewide coalition promoting investment and excellence in transportation all across the state. In the coalition’s five years, we have mostly been talking to lawmakers and administrators, the media and other advocates. More recently, we have been engaging with the public to help build a new generation of people who share our mission. This winter’s storms exposed longstanding problems with old infrastructure, and it has focused overdue attention on our entire transportation network. It’s changed what we do, and who cares about it.

Governor Baker appointed a special panel to investigate the T’s operations, financing and governance. They will issue a report in a few weeks that is eagerly awaited and must help catalyze action. We have advised the special committee that while reforms are clearly necessary, for years the T has been overburdened with debt and underfunded to maintain its old systems while needing to add capacity to meet demand. Without question, there are management issues at the MBTA, but they are made a convenient scapegoat. And T riders and the people and businesses that depend on public transit are the ones who really pay if we don’t step up to improve it. If we don’t build a 21st-century transportation network in Massachusetts, tomorrow’s economy will grow elsewhere. We are also encouraging people to contact the governor and their legislators to support funding for transportation, and to check in with our website.

You’re running events for a food pantry, on Natick’s Board of Selectmen and doing transportation advocacy. How does your Judaism inform all the things you do?

I believe, as I think many of your readers do, that we enrich our lives by improving the world and by trying to right wrongs. I feel a connection to Jewish traditions of ethical behavior, to menschlichkeit, tzedekah and mitzvot, and to making the world a better place and celebrating learning, joyfulness and food.

I’m not a very religious Jew, and I identify most with Humanistic Judaism and the value of respecting the will of people and our potential for doing good, which is not to say that I don’t see the capacity of people for wrongdoing, because that’s part of humanity as well. The terrible deeds done in the world—to people, to habitat, to historic artifacts—make it very important to me to practice the values I most associate with Judaism. I encourage people to take part in their communities and solve problems in ways that benefit the common good. We don’t have to agree—that wouldn’t be very Jewish!—but we have to participate, and not just out of self-interest.

For me, personally, my Jewish identify is not about worship; it’s about trying to live by my ideals. I am conscious of the importance of tradition, but just as I try not to take anything for granted, I believe that every tradition is itself an adaptation. I think it’s OK to touch traditions; they aren’t behind a velvet rope in a museum. I also credit my mother, Elaine, for modeling civic activism, pursuing a collaborative approach to justice and community, and trying to inspire others. What better way for a Jew to make a difference than to have an awesome Jewish mother to set an example?

The East Coast Grill in Cambridge has a recurring event called Hell Night, which has a special menu with a few things that are way off the normal person’s spicy hot scale, as in, “What the hell did I just eat?!” Horseradish heat is like a wave. Scotch bonnet peppers are more like a volcano. So the Hell Night menu is not for everybody. But skillful cooking with intense spice is something that’s done all over the world, and it’s fun (if unusual) to have that experience now and then. I’ve been to Hell Night about a dozen times, often with my son, Jonah. I asked him this question the other day, and we agreed that their discontinued appetizer, Pasta From Hell, is probably the hottest food we’ve ever eaten. It was made with ghost peppers. You had to sign a waiver when you ordered it! Someone actually left in an ambulance once.