Just writing out all of the projects Michael J. Epstein is working on makes me exhausted. His current musical project, “Michael J. Epstein Memorial Library,” is playing at the Middle East Upstairs this Friday, August 9. He’s also putting the finishing touches on a movie, “TEN,” which he funded in part through Kickstarter. I asked him about his prolific ways and got some prolific answers!

How would you describe the Michael J. Epstein Memorial Library’s sound? 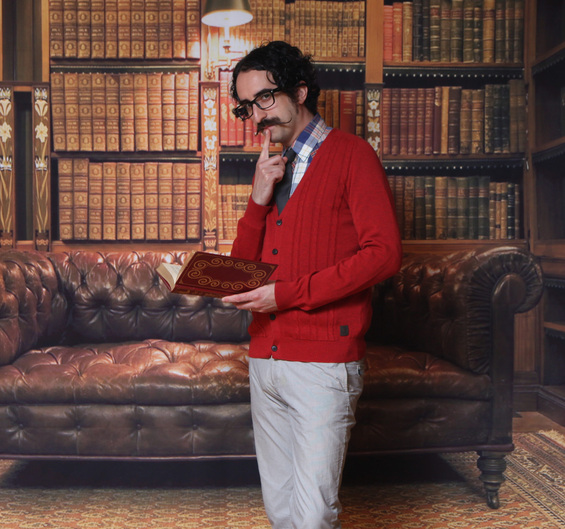 The Michael J. Epstein Memorial Library was kind of devised as an experiment. I had been playing in an indie rock/pop band, The Motion Sick, for a few years, and wanted to do something different. My goal was to organize a group of female performers who didn’t really have much existing footing in the rock world. I thought it was a fun opportunity to pull more talented women into the local indie music world and let something musical emerge naturally, rather than hold it to a strong, single, pre-existing vision.

As the band has evolved and adapted, we’ve just organically gone from playing ensemble folk music to far more diverse songs, ranging from the abstract to blues to darkwave to surf, while always trying to keep some accessible pop sensibility. I go into our writing sessions and try, despite my natural tendency to take control of direction, to let as much emerge from the contributions of the band as possible before stepping in and contributing at all. In fact, our most recent song, “The Taming of the Spy Who Loved Me,” is built around music that was written completely without my contribution. I don’t even play on the recording. So nowadays we sound like whatever the people in the room feel at the moment. It’s a beautiful push-and-pull toward the sensibilities of each member, and I have so much fun just sitting back and watching songs spring forth.

You’re not just a bandleader; you also write children’s music. And you’re also a bit of an auteur. What’s this about a movie?

My understanding is that psychologists believe there is some kind of physiological deficiency in the inhibition circuits of the brains of patients who have substance abuse disorders. I have been wondering for a long time if the same inhibitive deficiency is present in prolific artists. I consider it unlikely that I have more creative ideas than an average person, but what I think happens is that I am less good at accepting limited realistic capacity. I find myself compelled to create constantly and to follow whatever is interesting at the moment.

Numerous songs, books, television shows and films have explored the metaphors of bodies filled with tiny voices looking to take control for fleeting moments. Rather than letting those voices battle, I like to allocate a little time and energy to each one that compels me. So, one voice wants to create characters for children, one voice wants to sing sad folk songs, one wants to play tongue-in-cheek garage rock, and so on. I guess it’s probably like picking your favorite child. I don’t like to choose, so I do it all!

In fact, this all ties in with the film, TEN, that I’ve been working on for the past year or so. On the surface, it’s a conglomeration of lots of my favorite genres of film, with the types of images and stylistic touches that I like as a viewer, but underneath, it’s a sort of exploration of the meaning of identity. It’s my first feature film, so I can’t really gauge how much we’ve all succeeded, but we hope it’s crafted so that it can be enjoyed simply as mindless entertainment but also provides the viewer some things to think about.

As for the idea of being an auteur, there are many recurrent ideas in all of my work, whether it’s children’s songs, rock songs or films. All of it always has my “core” personality in it. I always betray my creative role with some kind of familiar thread of nonsense.

You and your band mates have successfully used Kickstarter to fund your projects. Do you see an overall shift in the way music and the arts in general are produced?

Over the past few years, my creative partner and wife, Sophia Cacciola, and I have built a home studio, bought camera gear and learned that wanting to create also brings with it the onus of all the associated technical and business tasks. Even artists who seem like they are tremendously successful are probably barely squeaking by, or even bleeding money. In a way, that is what has driven self-sufficiency and fan-funding models—we have to be able to make everything without help, and we have to find the necessary money and resources ourselves.

We have only done one Kickstarter campaign, which was to partially fund our movie. There was no way we could make that movie without some external funding, and Kickstarter seemed like the right place to ask. Most of the contributions were made by people familiar with our musical projects. The problem with Kickstarter and all of the crowd-funding platforms is that they have actually almost completely shifted from crowd-funding to pre-selling, which is a much less empowering and exciting structure. I’ve written a few articles about why that shift will ultimately saturate the field and create a vast, self-destructive public misunderstanding of the power of crowd-funding.

When the idea originally sprung up, I envisioned people browsing projects and making micro-donations of a few dollars to many projects they deemed worthy. The primary reward, to me, should be knowing that you helped make an otherwise impossible artistic statement happen. Unfortunately, very little of it has worked that way, and it has mostly shifted toward fewer people giving more money, primarily in exchange for rewards. We’ve contributed to more than 100 projects, and I always feel excited to be a small part of something that might not exist otherwise. I rarely even care about the rewards.

As micro-investment becomes legal and sensibly structured over the next few years, I think we will see a much more powerful and meaningful shift in how artistic endeavors operate. We’ll once again have a system for aggregating risk without huge burdens placed on individuals. It has great potential to be the biggest shift in arts funding in history.

What’s with the librarian thing? Do you have to shush your band mates constantly?

The library thing really came about after playing in The Motion Sick for years and, when it ended, kind of feeling like I was losing momentum by having a new band with a new name. I hated having my name in my band name, but I thought it would be better to structure it so that everything I did kind of lived under the umbrella of my name.

I thought maybe it would make sense for me to have a memorial thing. That way my name would be in it, but it would imply that it was in memory of me rather than including me. It made me feel a little better about the whole thing. I listed off a bunch of choices, and “library” seemed to make the most sense for what I hoped to present.

We used to start every show with a shush. It’s actually amazing how silent a room, even a rock club, gets when you do that. It was a sneaky way to say, “Hey, we’re going to play some songs now; maybe pay attention.”