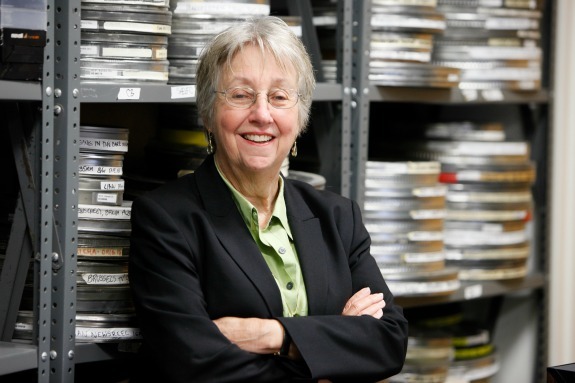 Now through May 15 is The National Center for Jewish Film’s 18th Annual Film Festival. This week I chat with Sharon Pucker Rivo, the Center’s co-founder and executive director, about how she chooses what gets screened at the festival, as well as the Center’s unusual archive collection.

Tell me about this year’s festival.

It’s our 18th year for this local Jewish film festival. We have 16 films showing in three different venues. They’re all fascinating, entertaining, educational and challenging.

How do you decide what makes it into the festival?

We’ve been around for almost 40 years, and we’re the largest archive of Jewish film outside of Israel. We’re also a distributor and provide archival footage for filmmakers and help restore film. We have a lot of contacts through this. Some films we’ve known since their “birth.” Two of the films are under our aegis: “Raise the Roof” and “Theodore Bikel: In the Shoes of Sholom Aleichem.” Lisa Rivo, the Center’s co-director, and I make the decisions, but we also turn to our colleagues here at Brandeis University. We may see something we don’t know about and we’ll ask for their opinion and help on it.

Quality is the No. 1 criteria for a well-made feature film or documentary. Then it’s about deciding if it’s rich in Jewish content. There might be a peripheral character that is Jewish, but that may not be enough for us. It’s the place of Judaism and identity. Another factor to be considered is what’s available at the time of year we’re set to launch the newest festival—that’s about a year to nine months beforehand. But we really start looking in December, January and February. Many films and filmmakers we’ve followed over the years, like “Dancing Arabs”—we’ve shown the filmmaker Eran Riklis’s last film. We represent 30 Israeli filmmakers, so we know what’s coming out. “The Kindergarten Teacher” is one—we screened Nadav Lapid’s last film, “Policeman,” and are looking forward to this one.

The National Center for Jewish Film is the official archive repository for Nazi propaganda films in the United States. How did that come about, and why is that a part of your mission?

In early 1983 we were invited to the Berlin International Film Festival to show the Yiddish film “The Light Ahead.” There we met the Minister of Culture for the Region of Berlin. We had encountered a number of filmmakers trying to make films in Holland and Denmark, and they didn’t have access to these films that were also disappearing from the public. We asked the government for help and received pristine copies of Nazi propaganda films that were being kept in cold storage. We keep these archived because we want to make sure they don’t disappear. Honestly, a lot of these materials aren’t available in Germany. We felt there should be archival footage available outside Germany.

What are you personally most looking forward to at this year’s festival?

I’m looking forward to sharing some of the materials. Some have commercial releases, but not all of them do. We have 25 guests coming—producers, colleagues and participants, like Rick and Laura Brown at the MFA. We also have The Boston Globe columnist James Carroll for “My Italian Secret: The Forgotten Heroes,” as well as the director and Oscar nominee Oren Jacoby, plus Nancy Harrowitz, who teaches Holocaust literature and film at Boston University. Sophie from “The Outrageous Sophie Tucker” actually lived in the North End and kept everything, including more than 400 scrapbooks, some of which are at the library here at Brandeis. The filmmakers Susan and Lloyd Eckler pored over these at the library. Joyce Antler, who teaches here at Brandeis and is really an expert in the field of Jewish women and comedy, will be at the MFA screening too.