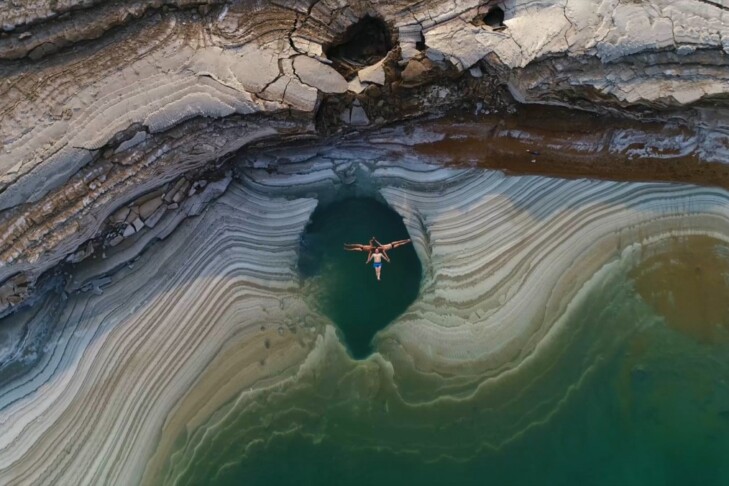 Boston Jewish Film’s Israeli Film Festival 2022 captures the challenges and poignancy of Jews and Arabs struggling to live together in Israel and the Palestinian Authority. Many of the films are stories trumping ideological differences to highlight the humanity, intricacies and misunderstanding of coexistence.

The festival’s opening night film, “Dead Sea Guardians,” is an idealistic, multi-prong effort to save the Dead Sea from shrinking. The film focuses on a unique alliance—a Jew, a Jordanian and a Palestinian—who take the swim of their lives to demonstrate the importance of saving the sea. “Let It Be Morning” closes the festival, leaving audiences with a complicated, provocative picture of life as an Israeli Arab within Israeli and Arab societies. 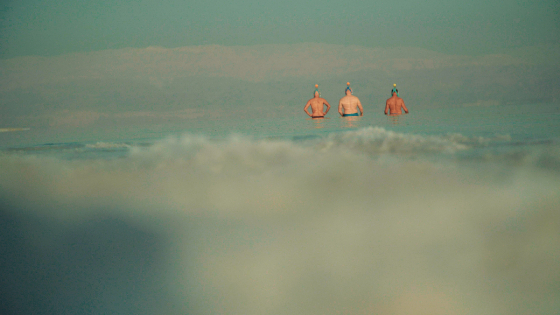 Oded Rahav has a dream to save the Dead Sea from disappearing. The 40-something Israeli is an environmental entrepreneur and activist who assembles an international coalition of environmentalists and swimmers to draw attention to the ecological crisis that will ensue if the Dead Sea dries up.

As Rahav discovers, it’s complicated to recruit Jordanians and Palestinians to swim alongside Israelis across the sea they desperately want to save. In addition to Rahav, two men emerge as forces to save the environment. Munqueth Mehyar, a Jordanian, is the director of EcoPeace, an organization unusually comprising Palestinians, Jordanians and Israelis. Mehyar’s calm demeanor belies the fact that he grapples with his local community’s ongoing dissatisfaction over his cooperation with Israelis. Regularly threatened, Mehyar has survived an assassination attempt and deals with his Palestinian wife’s disapproval of his work.

As a Palestinian, Yusuf Matari straddled two worlds. By day he worked with Israelis and tourists from all over the world at the Dead Sea. In the evening he returned to his village in the Palestinian Authority. The sexagenarian was a lifeguard for over three decades until the Dead Sea beach where he worked closed because of the shrinking sea. Matari is deeply connected to the sea in body and soul. He’s willing to risk his family and village’s scorn to save it. However, in the end, the film’s star is the Dead Sea itself, with the people who want to revive it in memorable and crucial supporting roles.

“Let It Be Morning” 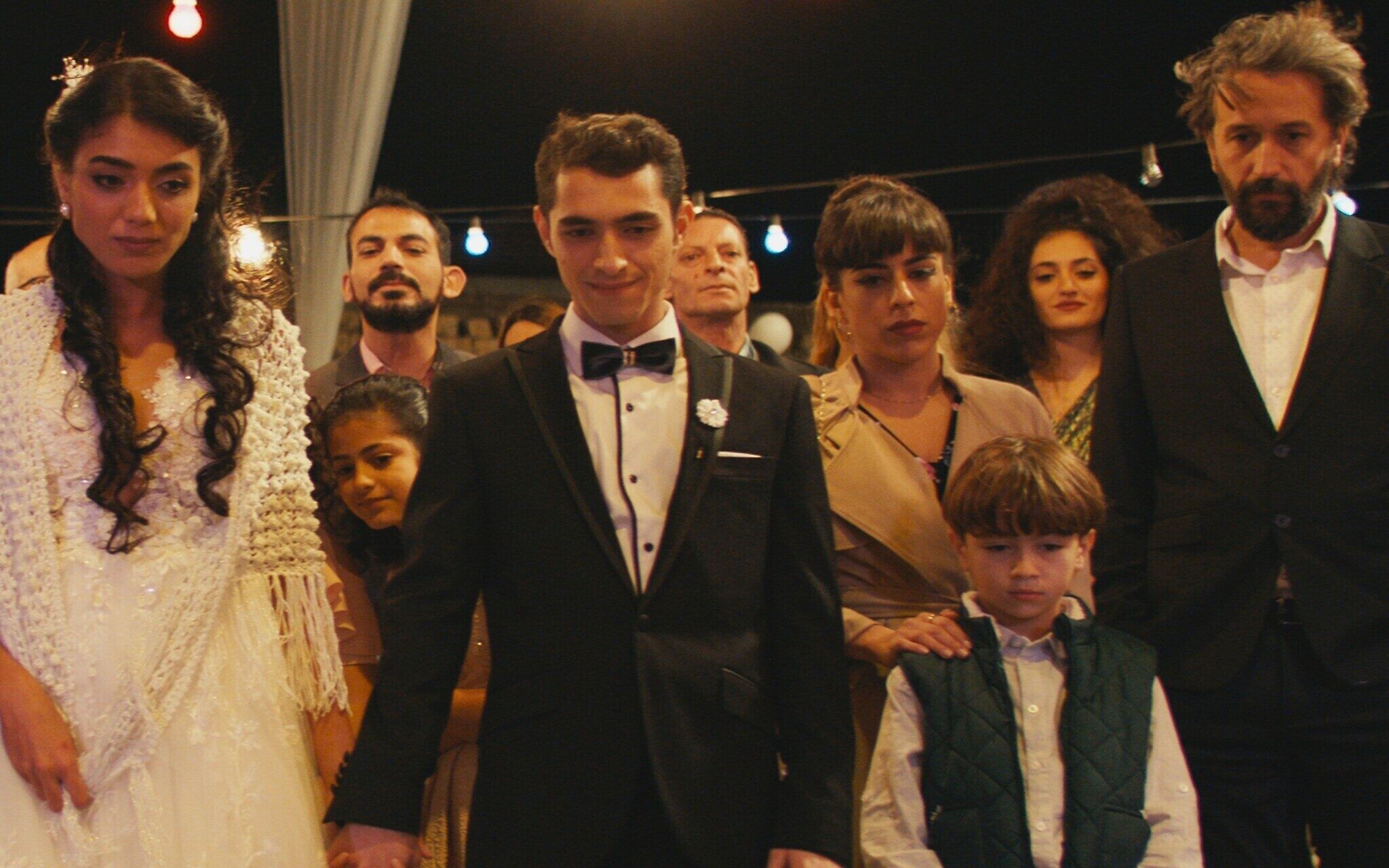 “Let It Be Morning” (Promotional still)

Sami has returned with his wife and son to his Palestinian village to attend his brother’s wedding. Eran Kolirin, who previously directed the breakout film “The Band’s Visit,” gives audiences a more probing and internal film based on a novel by the Israeli Arab writer Sayed Kashua, who wrote it in Hebrew.

Sami is keen to return to his home in Jerusalem, where he works as a mid-level telecommunications executive and has a mistress. But an unexpected military lockdown strands him in his hometown, a place to which he always resents returning. The Israeli authorities have closed all the roads out of the village, cutting off cell service and the internet to crack down on West Bank Palestinians illegally working in town. A father and his young son building Sami’s second home at his father’s behest squat in the unfinished building.

The film is full of symbolism: Doves fail to fly away at the wedding, bringing forward an apt metaphor for the Arabs trapped in their villages during this latest lockdown. The lone Israeli soldier guarding the blocked road is a scared teenager who strums his guitar to assuage his nerves. Kites and watermelons, symbols of Palestinian resistance, appear in various scenes. In the film’s last scene, Israeli Palestinians come together and see the wall that separated them from Israel has already been torn down.

The award-winning “Let It Be Morning” has recently had its share of controversy. The winner of nine Ophir Awards (the Israeli equivalent of the Oscars), including best picture, it was also Israel’s submission to the Academy Awards. However, its Palestinian stars refused to attend the Ophir ceremony. Juna Suleiman, who brilliantly plays Sami’s wife, sent a message that Kolirin read to the audience. She wrote, “Normally, I would be expected to feel happy and grateful for this award, but unfortunately that’s not possible when there are efforts underway to completely erase Palestinian identity and the collective pain I carry with me into every role that I play.” 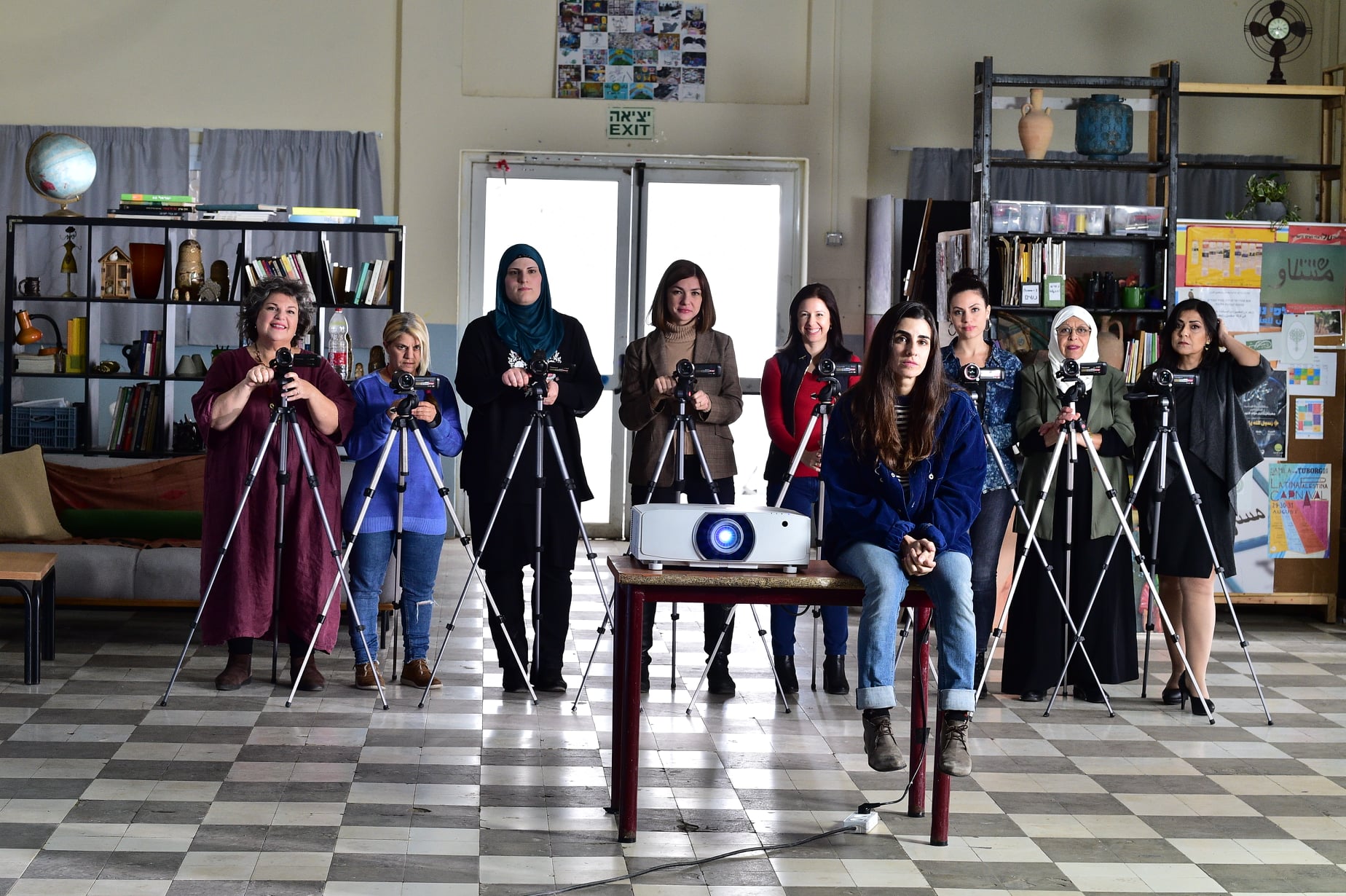 “Cinema Sabaya” centers on a fictional group of eight municipal workers—Israeli Arabs and Jews—in the working-class mixed town of Hadera, between Tel Aviv and Haifa. The women are enrolled in a filmmaking workshop led by Rona, a young Israeli director. The film’s director, Orit Fouks Rotem, led similar workshops in the mixed Jewish Arab northern city of Acre and at Givat Haviva, an Israeli organization promoting reconciliation between Jews and Arabs.

An affecting piece of symbolism begins the film as these Arab and Jewish women note the word “sabaya” has very different meanings. In the Arabic pronunciation, the word means “prisoner of war.” In Hebrew, it means a group of young women. These women will come to experience both definitions as they explore their lives through the ad hoc films they shoot.

The film’s action solely unfolds in a classroom, where the participants’ films are screened during their weekly group meeting. The revealing snippets show both the limits and infiniteness of art. What’s shown and isn’t shown is revelatory. A young Arab woman, the mother of six young rambunctious boys, wears a hijab and wants to obtain her driver’s license despite her husband’s disapproval. She films the chaos of her family life in a cramped apartment, and the audience witnesses her emotional and physical challenges. An Israeli mother worries about sexualizing her 12-year-old daughter if she allows her to shave her legs. An Israeli Arab lawyer dreams of singing on stage.

Soon enough, these women discover the power of experiencing their stories on a large screen. In the process, this film shows that these women have been given the opportunity to go to places with their art that previously only existed in their dreams. 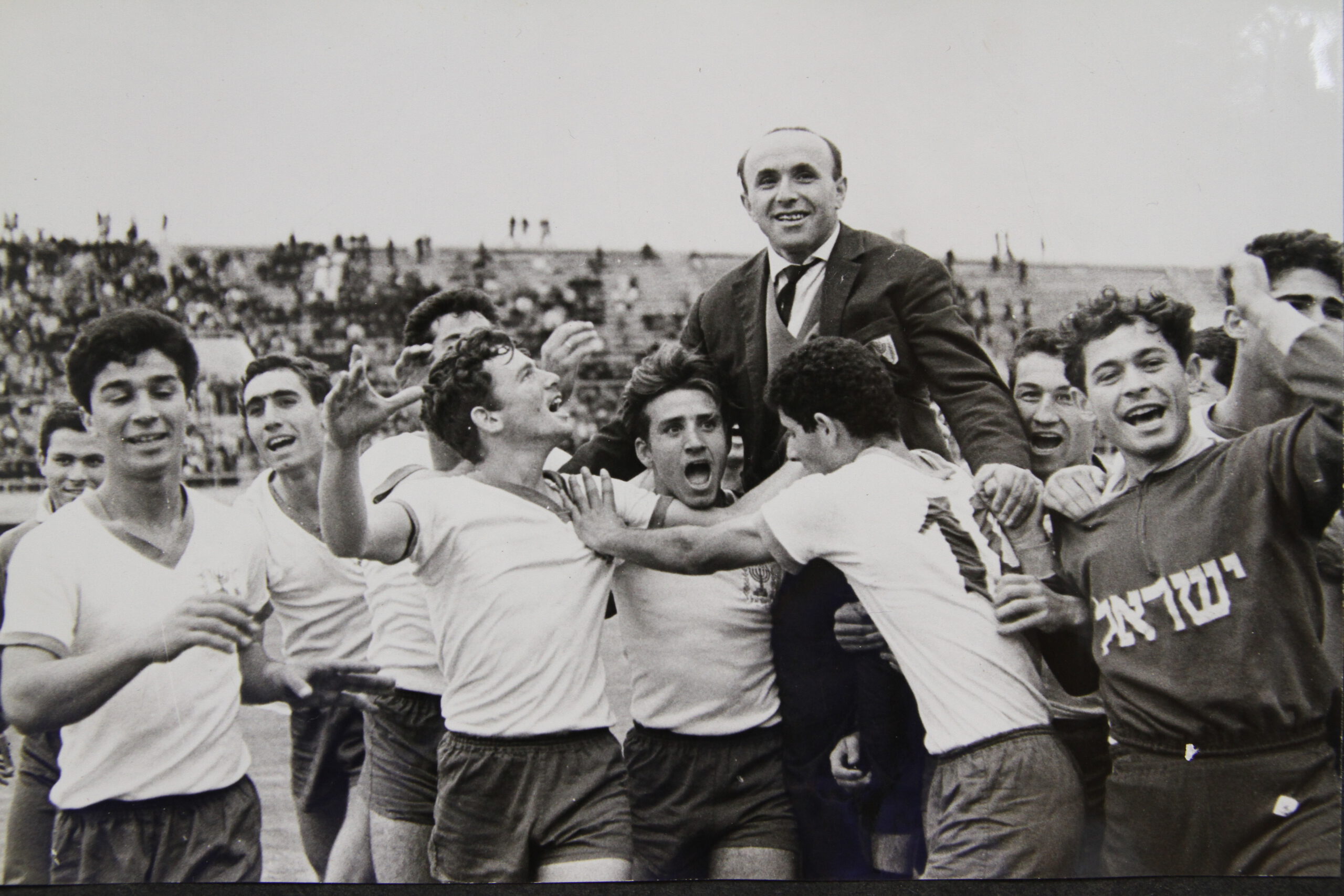 This remarkable documentary captures the complexity of the post-war German-Israel relationship through soccer. The film centers on Israel’s most famous football/soccer coach, Emmanuel “Eddy” Schaeffer. The Ukraine-born Schaeffer, raised in Germany, was the only member of his immediate family who survived the Holocaust. Schaeffer was a talented soccer player throughout the 1940s and ‘50s and counted several German coaches as mentors. When he arrived in pre-state Israel in 1945 at the age of 23, he was determined to make soccer a national priority for the nascent state. By the age of 33, Schaeffer was permanently sidelined with an injury. Prior to that, he ignored the Israeli ban on traveling to Germany. He honed his soccer skills and coaching strategy in workshops in Cologne’s selective sports academy during the 1950s.

Diplomatic relations between Israel and Germany began in 1965. At the time, Menachem Begin, who was elected as Israel’s prime minister in 1977, condemned the idea of reconciling with Germany, declaring, “There was not a German who had not murdered our fathers. Every German is a Nazi. Every German is a murderer.”

However, a soccer match between Israel and Germany in 1970 achieved a level of diplomacy in 90 minutes that the two nations previously failed to forge. Schaeffer and his old friend Hennes Weiseller, the coach of Germany’s elite soccer team, organized the match. Israeli soccer fans were thrilled to watch their favorite German players on the field. Cheers of “Viva Germania” echoed throughout the packed Bloomfield Stadium in Tel Aviv. The game was a blowout for the Germans, who beat the Israelis 6-0. During the match, Weiseller approached Schaeffer and asked if his team should hold back. Schaeffer refused in order to teach his team what to expect at the World Cup two years later—the only time an Israeli soccer team played in the tournament. Schaeffer died in 2012 at the age of 88 and was eulogized as a hero on and off the soccer field.

“That Orchestra With the Broken Instruments” 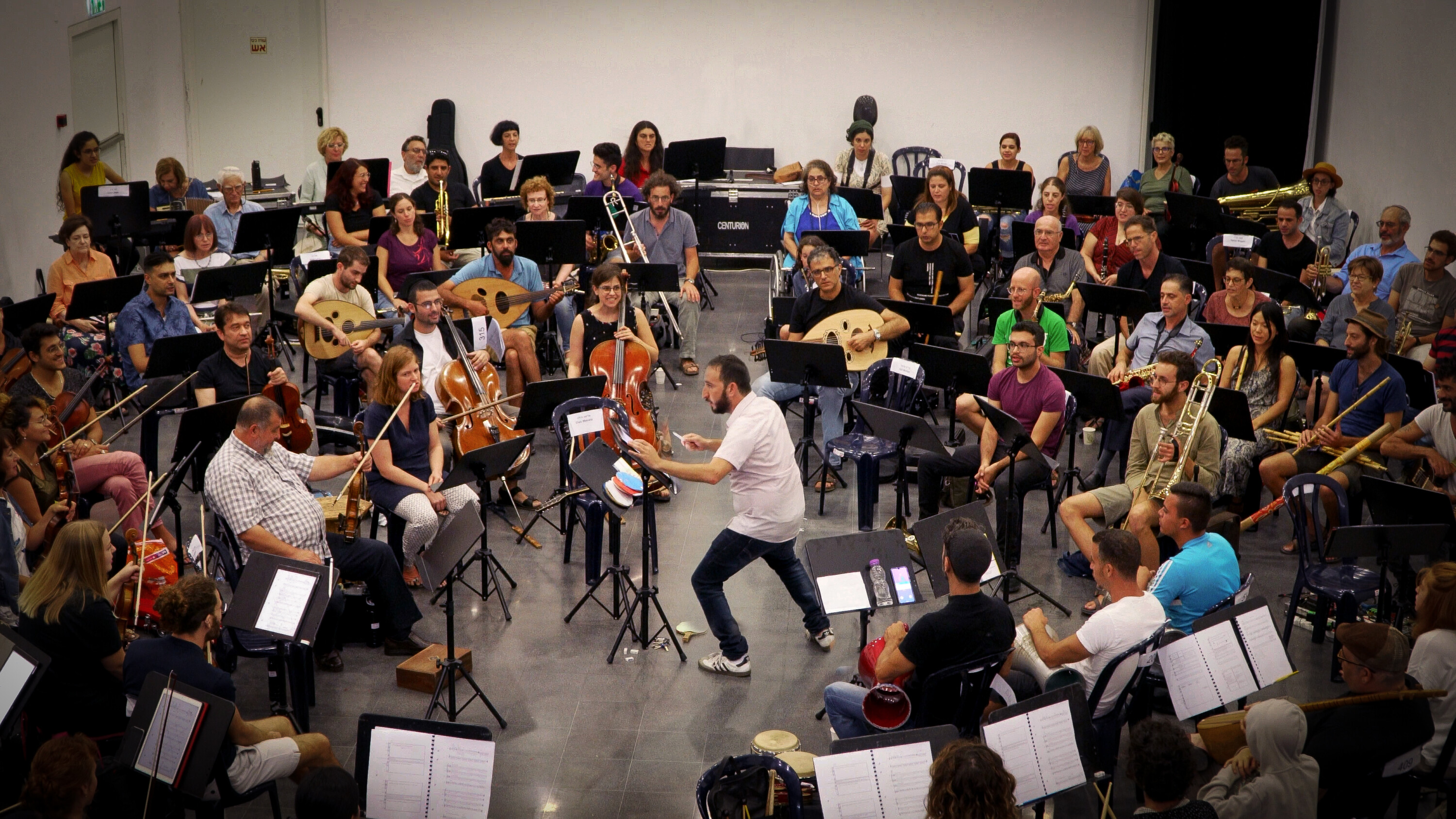 “That Orchestra With the Broken Instruments” (Promotional still)

In the summer of 2019, over 100 musicians came together for four days of rehearsals, playing 133 instruments that included cracked cellos, violins missing strings, flutes that leaked and horns with broken valves. This graveyard of instruments had been collected throughout Jerusalem for months to be played at the premiere of “Shalem: A Suite for Broken Instruments.” Fittingly, shalem is the Hebrew word for “whole.”

The symbolism of creating new harmonies and fresh sounds from these broken instruments in a city rife with sectarian tensions and frequent violence is poignant. The instruments were rescued from city storerooms, home basements and other abandoned places. Collectively, they embodied wholeness. The suite’s three movements were written and conducted by three eclectic composers. While the documentary shows the process of extricating unusual sounds and melodies from the instruments, it also highlights the endeavor’s multicultural spirit. Directions are given to the musicians in three languages—Hebrew, English and Arabic—as the players conjure animal sounds with their instruments for one movement and mimic chanting for another. Over four days of intense practicing, the piece emerges as a musical and spoken dialogue between broken and intact. The music drawn from brokenness is also a profound metaphor for finding harmony in a broken city.

The documentary ends with an energetic performance of “Shalem” on a makeshift outdoor stage in the heart of Jerusalem. The 133 instruments were played, including two cymbals a young boy clanged together at the end of the concert, demonstrating that two parts can make one whole. 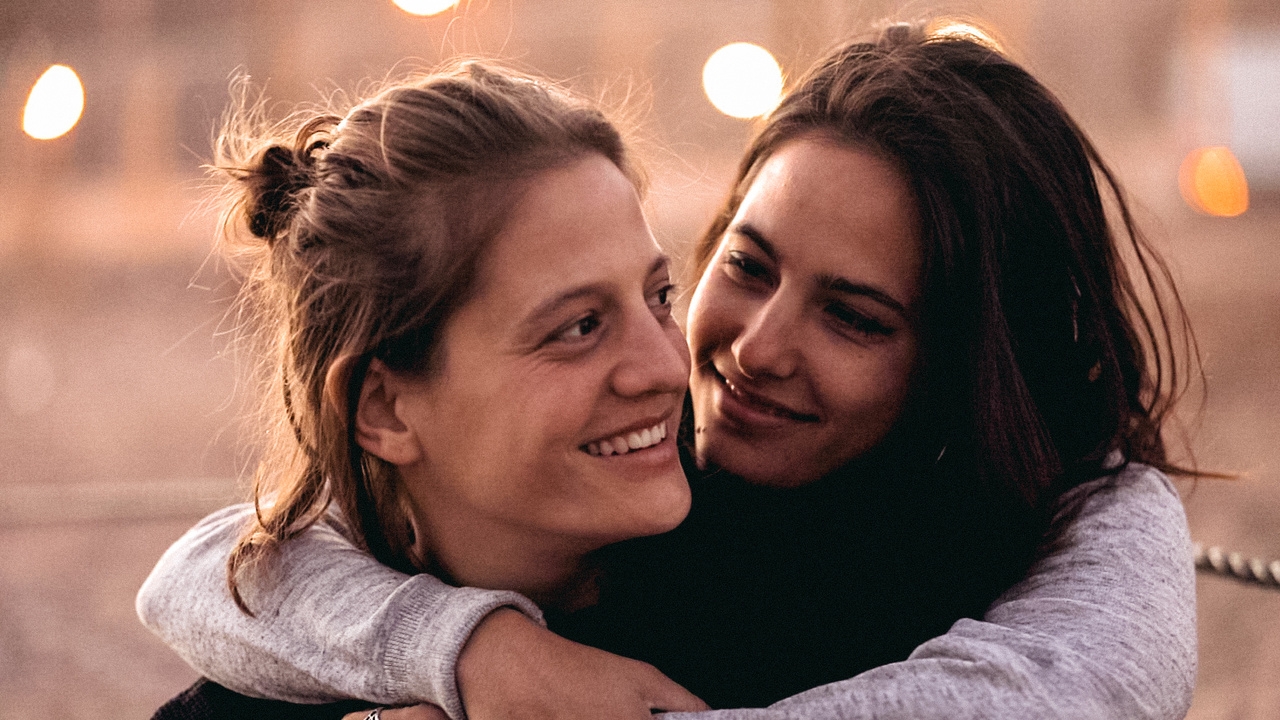 Astar Elkayam makes her directing debut with “Two,” a film that follows the trials and tribulations of a single-sex couple trying to have a child. Omer and Bar’s desperate wish to be mothers launches an emotionally wrenching fertility journey. After five disappointing tries to inseminate, Omer finally becomes pregnant. The good news comes after months of dreams dashed and anxiety.

Elkayam shows the lengths the couple will go to have a child. It starts with choosing a donor whose genes complement the two women. For the couple, becoming parents has to be necessarily intentional—creating unbearable stress. Viewers see the couple go through extreme lengths to have a baby, maneuvers that involve several expensive trips to a fertility clinic and perfunctory doctors’ appointments for the insemination. Each attempt to become pregnant wears down the couple until their relationship unravels.

Elkayam made the film as she underwent IVF treatment and edited it while she was pregnant. Her experiences with infertility give her a unique perspective on the toll body and soul endure during the process. While the film touches on questions about whether the means justifies the end or how many setbacks a relationship can withstand before it collapses, ultimately it does not delivery satisfactory answers.

“Two” occasionally feels like Elkayam made the film she needed during her fertility journey. She clearly shows that IVF is a grueling process, one that is mixed with disappointment, tentative and painful hope and extreme anxiety. While the ending encompasses those truths, it ultimately fails to impress important messages about relationships and the impetus behind wanting a baby at any cost.