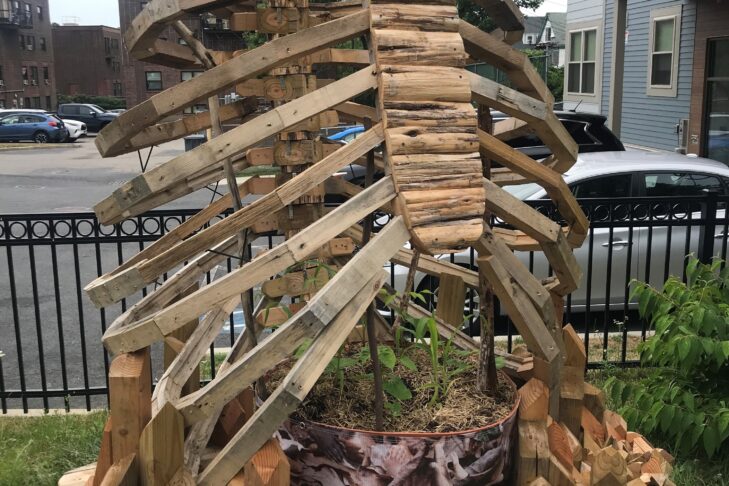 After so many years in the trenches, Ruth is proud to say that she is not just an activist, but an artivist seeking to illustrate and support us all in making change through art.

This is how Ruth became the inspiration behind “Be the Change,” a JArts-created public art initiative launching in Boston and continuing in Cincinnati and Los Angeles.

To understand what artivism is, why it matters and how this project came to be, I asked Ruth for some words of wisdom. Here’s what she had to offer.

When did art become important to you in advocacy work?

I have been doing advocacy work all my life and rarely thought of the role art could play in advocacy work until recently. This notion came to light and life at AJWS, an international human rights and development organization, through the work of my wonderful staff and my discovery of the power of a story. Telling donors about global human rights and empowering local actors had some impact—but letting them hear from and see online the woman whose life was changed because there was a shelter that let her escape her abusive husband, or meet the farmer who fought successfully to keep his land, made all the difference. That opened me up to the realization that the play about rape, or the art piece showing people rebuilding their community, were ways to engage viewers in fighting for change. That worked better than badgering them with statistics.

Why is art such a strong tool for advocacy work?

Art brings the issues and crises that beset us—social, environmental, political—to people in a way that reaches them, affects them emotionally and often engages them. Of course, this is particularly true when we are talking about visual art because the object is there on a wall, on a table, in a public park, on the side of a building where random people will encounter it when the issues it represents were not on their minds but, suddenly, it’s there.

What has been your most significant artivism experience?

When I first became aware of storytelling, of dramas as ways to bring issues to public attention, I made two connections. One was to my seeing Picasso’s “Guernica” around the age of 12. I fell in love with this visible representation of everything that is wrong with war, which I knew and which informed some of my youngest activism, but which the mural really drove home. The other was that the more global human rights work I did, the more time I spent on trips doing my personal photography, and the more effort I made to capture faces in my photos that made people want to know more about the subjects and their stories.

When you first envisioned a “Be the Change” tzedakah box, what did it look like and do?

The idea was not mine originally. We had a curriculum for young people talking about the concept of tzedakah—what you give to, how you decide, etc. A part of the curriculum development effort was a contest to design a tzedakah box. One of the submissions was a picture of a large, 6-foot high lucite box spelling out of the word “change” with the letters approximately one foot deep and with slots in each letter for people to put in their change. That resonated with me as a way to remind people that money matters, that money helps promote change efforts, that we should encourage people both to give change and to “be the change” they want to create.

If “Be the Change” is successful, we will…

Continue to collect pieces of art and plays and songs and more that bring to life and light situations that call out for change, that represent or symbolize current injustices that need correction and try to find places for them to be and to be see—with reminders to the viewers that they can get involved in fighting these injustices, that there are things for them to do to make a difference.

Inspired by Ruth’s words? Learn more about “Be the Change.”