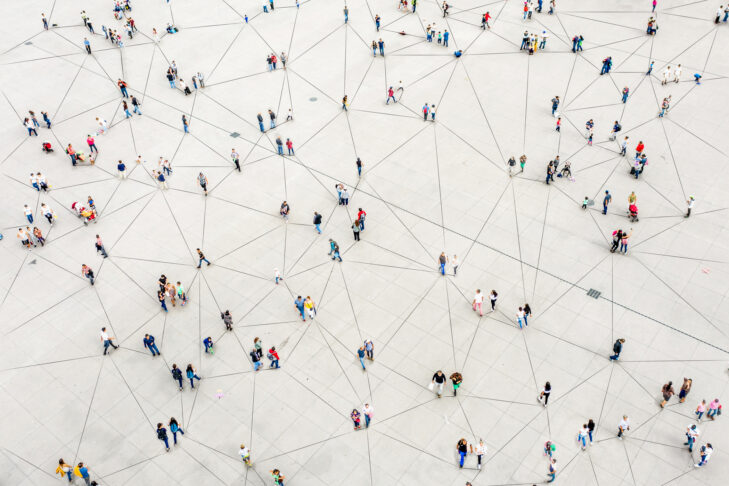 When Hurricane Ida devastated New Orleans en route to wreaking havoc across the eastern U.S. two weeks ago, it brought back bad memories for Northeastern University professor Daniel Aldrich. Sixteen years ago that day, on Aug. 29, 2005, Hurricane Katrina had struck New Orleans, where he had recently moved and was getting ready for a new job as a professor at Tulane University.

Aldrich, who is Jewish, was alerted late at night by a member of his synagogue. She told him to evacuate, and he and his family left at 3 a.m. on the day before Katrina hit. They headed west to Houston; the crisis transformed a customary four-hour drive into a 14-hour odyssey. Staying at a Days Inn, the Aldriches learned that the levees in New Orleans had broken, the city was flooded and their possessions were destroyed. Yet people in Houston and elsewhere offered to help. Aldrich’s uncle hosted the family for a week. Members of a local congregation, the United Orthodox Synagogues of Houston, donated clothing. Aldrich got offers of places to stay, playdates for his kids, even tuition assistance.

The source of all this, Aldrich said, was “that ability to have friends, and friends-of-friends, this whole social-network stuff. I began thinking about it a lot. What should we do after a disaster? What would be the most important agents in disaster recovery?”

It interested him so much that this became his new academic field of study. He focuses on networks, or social capital, and the different types that exist in society—from connections between ourselves and people we know pretty well (bonding ties), people we don’t know very well (bridging ties) and authorities, such as the government or nonprofits (vertical linking ties).

“Individuals who have those connections are already resilient,” Aldrich said.

He is now the director of the Security and Resilience Studies program at Northeastern. He has conducted research around the world—including in Japan after the tsunami, earthquake and nuclear power plant meltdown in March 2011, and in the Israeli city of Sderot, which borders the Gaza Strip and receives frequent Hamas rocket attacks. He’s also studying the ongoing COVID-19 pandemic, having written four papers with his lab about social ties during the pandemic. 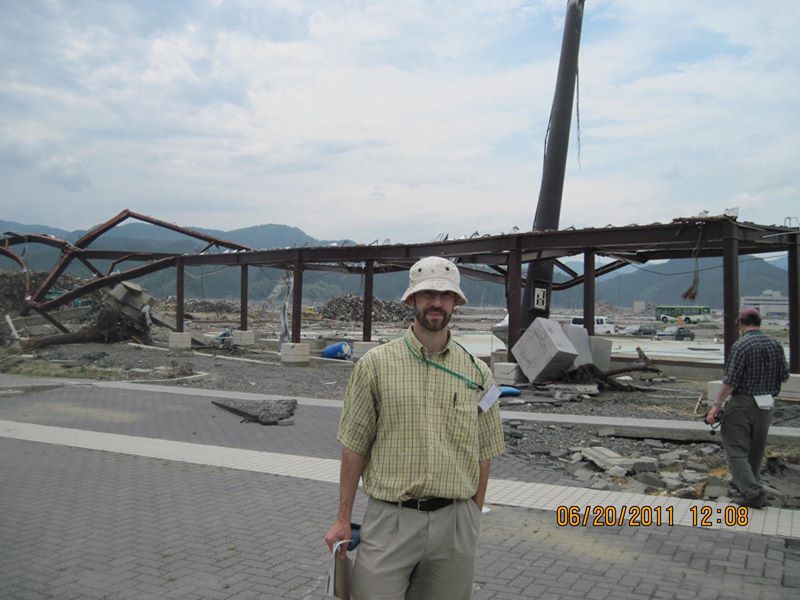 Daniel Aldrich in Japan after the 2011 tsunami (Courtesy photo)

For authority figures during COVID-19, he said, “The advice you give will land more smoothly and with the best intentions in communities with strong vertical ties linking social groups. They trust the CDC and [Dr. Anthony] Fauci. It will keep out COVID-19 cases longer. There will be fewer [cases] initially. They will follow advice, [wear a] mask, socially distance, wash their hands.”

Networks are part of Aldrich’s daily life in the Jewish community. During the pandemic, his wife, Yael Aldrich, has made masks for people using a sewing machine. A few months ago, their youngest son noticed that an elderly neighbor had fallen down and couldn’t get up and called 911. Aldrich’s morning minyan in Brighton prays outdoors due to COVID-19 protocols, and he is a regular attendee.

An ordained rabbi, Aldrich noted that Judaism is “built around a number of rituals requiring a group connection—the minyan, the blessing of the new moon, High Holiday services, the eve of Rosh Hashanah, Shabbat services, the daily minyan.” Such social ties are common across religions, he said, whether members worship in a mosque, a Sikh temple or a Greek Orthodox church.

And, he said, “having those networks of people” comes in handy during a crisis.

After his wife broke her foot a year ago, community members cooked meals for the family. When Brighton Chabad Rabbi Shlomo Noginski was stabbed eight times earlier this summer, Aldrich learned about it because Noginski is a counselor at his son’s summer camp.

“The minute that happened, everyone knew,” Aldrich said. “My wife and I cooked food for the Noginskis [and] raised money for them at a charity event. We quickly mobilized.” 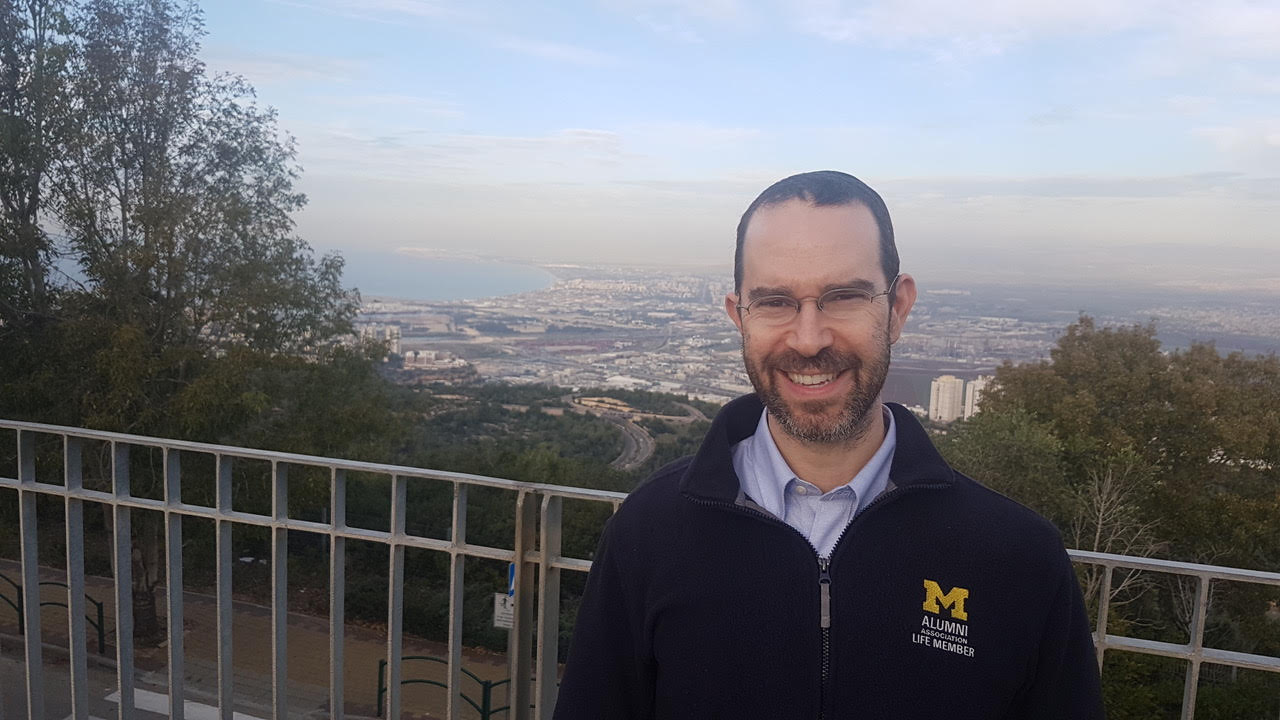 In Israel, Aldrich got to see how Sderot is mobilizing to help residents deal with rocket attacks from the Gaza Strip. He visited bomb shelters that have running and walking clubs, as well as gardening and playrooms to distract children. The games kids play there include a spinoff of “Chutes and Ladders” that encourages youngsters to recognize that others in Israel are going through what they’re enduring.

“The worst thing in the world can be feeling like you’re alone, going through this by yourself,” he said. “The best is if you and other people talk through it, discuss it, get it out in the open.”

Overall, he said, in Sderot there were “so many implementations, practical applications, during a shock, to coordinate, cooperate, commiserate.”

This year, there has been no shortage of shocks across the globe, from the Israeli-Palestinian conflict to Hurricane Ida to COVID-19 to the evacuation of Afghanistan. Aldrich sees lessons throughout—some of which might be counterintuitive.

In Afghanistan, he notes “the social networks people built through helping the American aid workers and service people. Networks are seen as very helpful in getting a job or access to electricity. At the same time, they’re increasingly dangerous; you might be targeted now.”

Although Afghans with connections to the U.S. might be suddenly imperiled by the Taliban or ISIS-K, Aldrich noted that people based here and abroad, including friends of his who are veterans, have used their social ties to help evacuate refugees. Those who have escaped include the Afghan robotics team and female athletes. Individuals with ties to other countries such as Mexico, South Korea, Canada and Albania have made use of these connections to send refugees there, in addition to the U.S.

“It could be literally lifesaving,” Aldrich said. “In some cases, it could put your life in danger. I see everything through the lens of networks.”