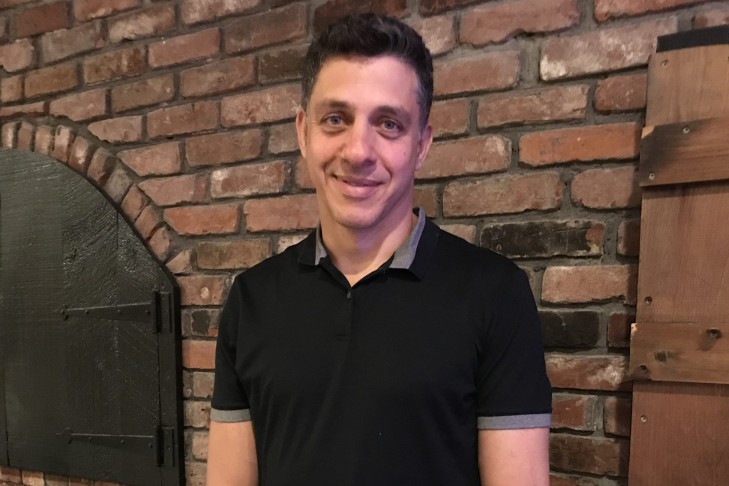 Nir Caspi served as a member of Shayetet, the Israeli Special Forces.  In fact, he was an Israeli naval commando, the equivalent of the U.S. Navy SEALs, from 1995-2000. Today, however, he is best known as co-founder of Café Landwer, the Israeli-based chain of gourmet casual dining cafes, two of which have opened in the Boston area. As the featured speaker at the recent Hadassah Metrowest welcome and membership dinner in Framingham, Caspi captivated over 100 attendees with the story of his journey from warrior to restaurateur and his special bond with Hadassah.

Caspi showed a video, which detailed a 16-man mission in Lebanon in 1997; their target was a Hezbollah senior terrorist. An explosion rocked Caspi’s unit and 11 soldiers died. Caspi was one of the five who survived, although he was badly wounded and almost lost his life. He lost many friends, including the buddy with whom he had enlisted. The physician sent to help the wounded was also killed. Caspi described waiting 44 minutes for rescue, with only a knife with which to defend himself, surrounded by dead and wounded comrades. Fellow soldiers risked their lives to save Caspi and his fellow soldiers and to bring home the fallen in what is considered to be one of the most complex rescues the IDF undertook in Lebanon. Caspi was 19 at the time and had already lost his best friend during a training drill.

While waiting in the midst of the carnage and chaos, said Caspi, “I thought about my parents and my girlfriend.” After his rescue, Caspi was treated at the Hadassah Medical Center in Ein Kerem. He spent three months at the hospital recuperating from his critical injuries. “The best doctors took care of me,” he recalled gratefully, “and I continued my rehabilitation and recovery there.” Caspi received daily treatment until he was ready to go back into service. “The minute I woke up in the hospital,” said Caspi, “I told my parents ‘I’m going back.’ Hezbollah didn’t interfere with my plans for the future.”

During a 2018 Yom Hazikaron (Israel’s Memorial Day) ceremony in Montreal, Caspi had the experience of honoring the 11 friends he lost in Lebanon, as well as three others who had been killed in action. “Fourteen of my friends lost their lives at the age of 19,” he said at the time. “They were just kids at the beginning of their lives. They died during our most important mission, to protect our only Jewish state, the State of Israel.”

When asked about PTSD, Caspi responded, “I was so badly injured physically, I had no time to be injured mentally.” Along with his unbreakable optimism, it helped that he was able to speak about his experiences with family and friends. “Others are not so lucky,” he added. “Nothing prepares you for an experience like this; you have to try to move on and be optimistic about the future.” He noted that the IDF is doing all it can to help soldiers with PTSD, as well as Israeli civilians. “This includes children,” he noted. “They also deal with PTSD from being shot at and bombed in their homes and schools. They are living in Israel, not Switzerland.” Caspi led over 10 special operations during his service and represented the Israeli SEALs in a joint training program with their American counterparts.

When an audience member expressed surprised at how mature he had been during the entire incident, Caspi responded, “Joining the IDF makes you grow up faster.” After discharge, as many ex-IDF soldiers do, he traveled for a year. “I especially enjoyed meeting different kinds of people from all over the world.”

After his service, Caspi earned a degree in law and business. In 2004 he co-founded Café Landwer. He pointed out that the original Landwer was established in Berlin by a Holocaust survivor. Caspi relocated to the Boston area a few years ago with his wife and three children (with one on the way), with the goal of expanding Café Landwer operations into North America. There are over 70 locations across Israel and two in Toronto. And now there are two cafes in Greater Boston, one at 900 Beacon St. near Kenmore Square, the other at 383 Chestnut Hill Ave. in Cleveland Circle. Cafe Landwer’s menu is inspired by Mediterranean and Italian cuisine. The restaurant serves breakfast, lunch and dinner. The menu includes such Israeli favorites as shakshuka, featuring eggs poached in a sauce of tomatoes, chili peppers and garlic, infused with the spicy amalgamation of cumin, paprika, cayenne pepper and nutmeg.

Except for the loss of so many friends, Caspi said he would not give up what he went through. “I believe that everything in life is for a cause. I am an optimist.” He wants his children to have the experience of serving in the IDF. Caspi plans to return to Israel in a few years. He and his family currently live in Newton. Caspi serves on the board of the Israeli American Council and is involved with Combined Jewish Philanthropies.

Caspi’s talk was a vivid reminder of the role of Hadassah, the Women’s Zionist Organization of America, whose chief responsibility is to support Hadassah Medical Center, the Israeli medical organization established in 1934, which operates two university hospitals at Ein Kerem and Mount Scopus in Jerusalem, as well as schools of medicine, dentistry, nursing and pharmacology. The organization’s mission is to extend a “hand to all, without regard for race, religion or ethnic origin.”

There are many Hadassah activities, trips and programs for women of all ages, with significant others welcome. For more information, click here.