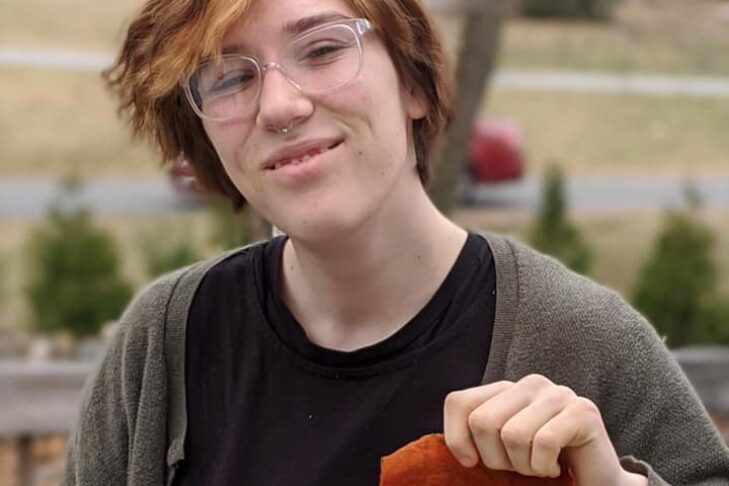 Noam Mason has been an artist and a crafter their whole life, a fact that becomes readily obvious as soon as we sit down to talk over Zoom about their company, Kol Atzmotai. I learned about Mason through “Expedition Maker,” a Jewish reality show (“The Great Jewish Craft Off”) organized by Camp Nai Nai Nai that showcases young Jewish artists (you can watch and then vote on projects each week).

Mason’s work, which mainly revolves around the creation of tallitot (prayer shawls) using natural materials, allows a primarily LGBTQ+ clientele to have a hand in the creation of their own Judaica, a process that many gay and trans Jews feel isolated from.

“About 75% of my clients have been LGBTQ+,” said Mason, who identifies as a Boston-centric genderqueer Jew with pride. “It’s exciting to create something with them.”

Mason had always been interested in fabric art, but a printmaking course with Antonio Fonseca allowed them to bring a new take on their previous work. “I made my own tallit first, over six months,” said Mason, and as interest from members of their shul grew, they first created a pair of tallitot for friends and then began taking commissions for custom Judaica. 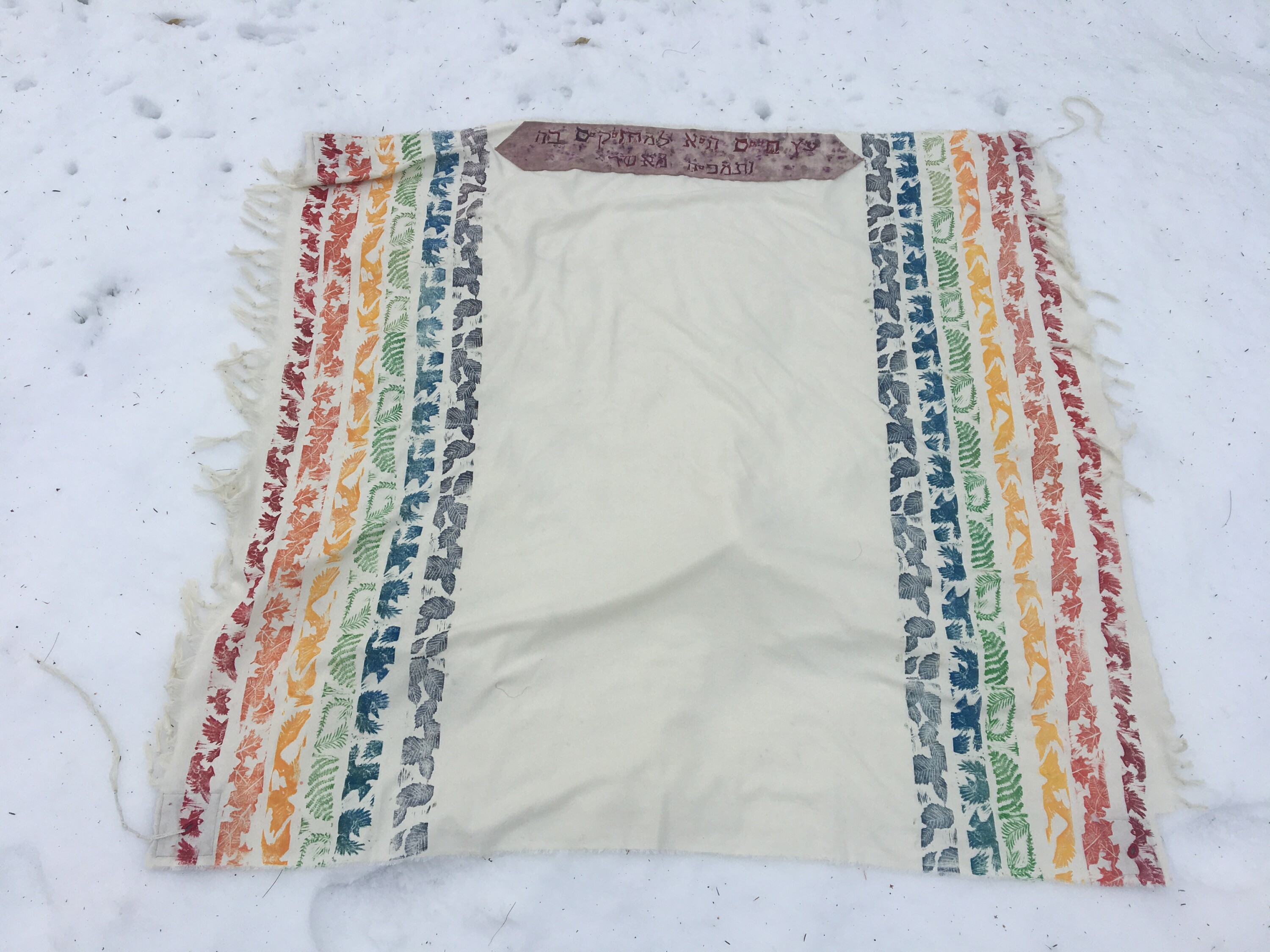 Mason begins the process with an intake meeting to determine the details of what the client is looking for in a custom tallit. “A few people know exactly where they want to go, but most people don’t know what they want,” said Mason. “So, since I work mostly with nature, I ask about where they grew up and what kind of flora and fauna is important to them.” Then they work up concept sketches and begin with undyed silk, the neckband and corner squares dyed with botanical materials they harvest year-round, such as wild grape, nettle, aster and goldenrod. Each natural design is then carved into a linoleum block, which is used to create a repeating design.

Mason then ties two as an example before showing the customer how to tie the final two tzitzit (fringes), either in person or on a video call. Involving the customer in this final act of completing their tallit allows them to give beauty to a mitzvah, known as hiddur mitzvah.

“One of the biggest spots on the tallit is the neckband,” says Mason, who visibly lights up when talking about their work. “But the blessing for putting on a tallit is not required on the neckband. It makes things more user-friendly, but it’s also a great place to dive into what in the liturgy is meaningful to you. I have this database of one-liners from liturgy and Tanakh, and when I study, I pay special attention to lines about nature and the relationship between nature and Judaism.”

Even if Mason’s clients aren’t quite sure what they would like to be written on the tallit, Mason has come to realize that people care more about the text than they initially realize. 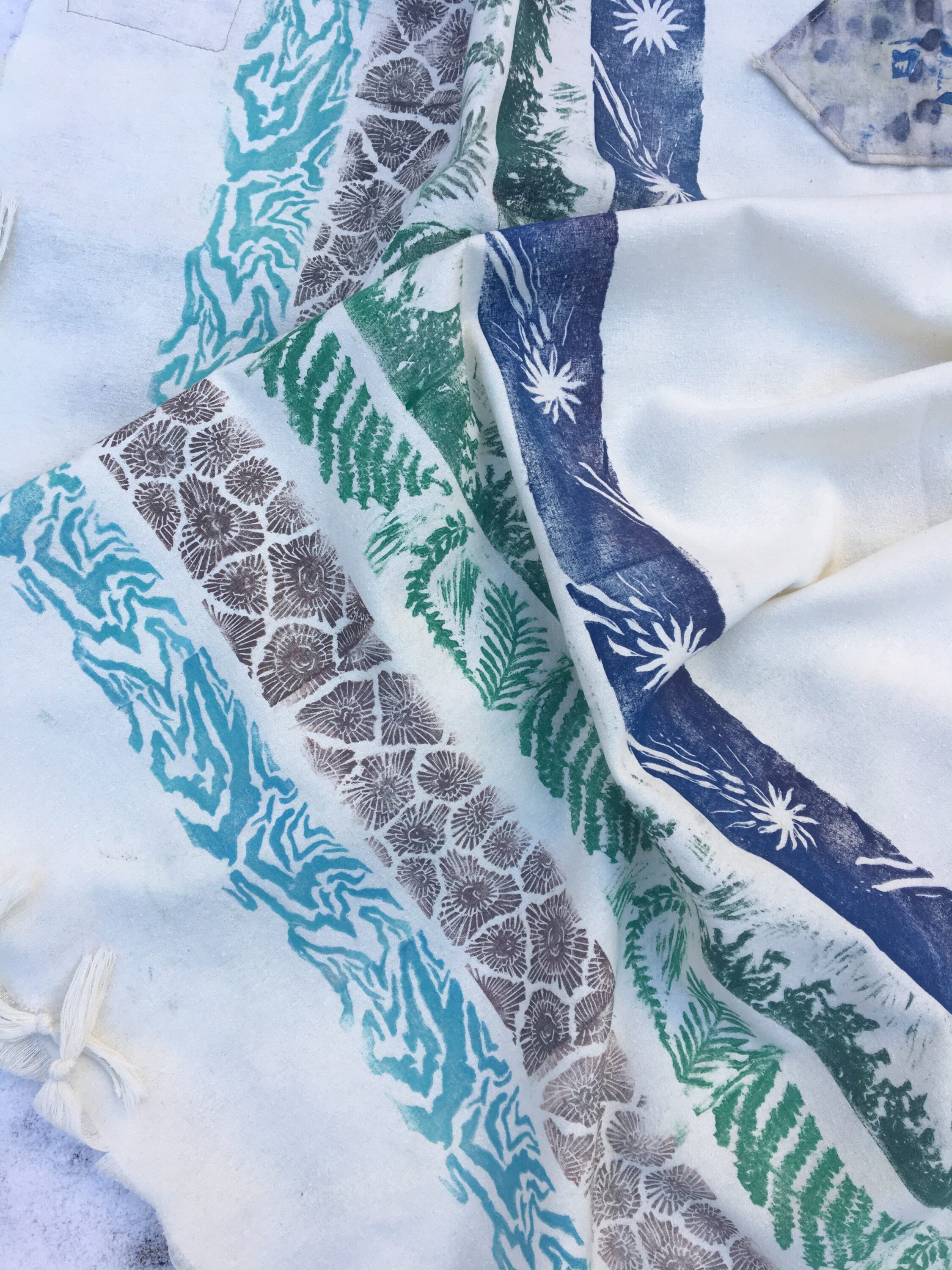 “When we study Talmud, we talk about ‘owning’ a text, and using a meaningful piece of liturgy on a tallit is a similar way of owning the text,” said Mason, who has also found that their own reading has deepened through their work.

Mason also speaks highly of their primarily LGBTQ+ clientele, as well as their all-trans and gender-non-conforming team. “Whenever I talk about my work, I mention that tallitot have a long history of being gendered garments, so it can be hard for LGBTQ+ Jews to find one that fits them,” they said.

Finding other LGBTQ+ Jewish people is always a blessing, and commissioning a custom piece from a genderqueer artist adds meaning to the practice of creating and purchasing a piece of Judaica.