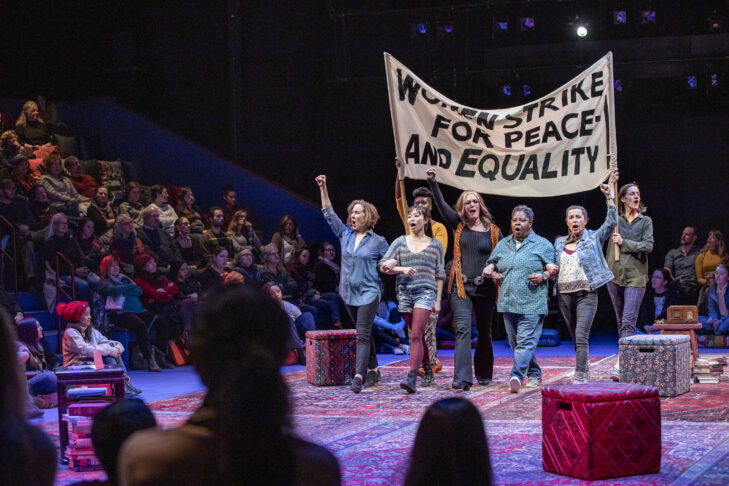 Last week I saw “Gloria: A Life” in previews and it showed me the deep debt of gratitude I owe to Steinem and her sister feminists. The play demonstrates that “women’s liberation” is not a kitschy phrase, but an apt description of a revolution that took hold in my mother’s generation. It reminded me that without the “consciousness-raising” of the 1960s, so many women’s lives—including those of my grandmothers—were stifled and lost to the patriarchy. My mother came to life when she entered the working world in the early 1970s, and she had Gloria Steinem and her sister revolutionaries to thank for it.

Presenting “Gloria: A Life” is a community undertaking. During its two-month run at American Repertory Theater (A.R.T.) in Cambridge, the theater will feature the mission and work of a Greater Boston nonprofit organization at each performance. (CJP is the nonprofit partner on March 1.) It will also engage audiences in a 20-minute post-show talk back, or “open circle,” moderated by various thought leaders.

Patricia Kalember, who plays Steinem, moderated the open circle at the performance I saw. In that talk back, I shared with everyone that my Cuban-born mother did not consider herself a feminist, but over the years I’ve recognized she was fierce about what she wanted and clear about what she felt she deserved. She was in the first large wave of women in the 1960s that went back to school for a professional degree. In her case, it was for two master’s degrees—one in Spanish literature and the other in education so she could teach.

In 1965, my mother was seven months pregnant when she began her course work. She went to school part-time in the evenings. She read most of “Don Quixote” propped up in a cookbook holder as she stirred a hapless beef stew or mixed a soggy tuna casserole. She wasn’t much of a cook, but she vividly portrayed the characters in any novel she was assigned to read for class. I was one of her first students. 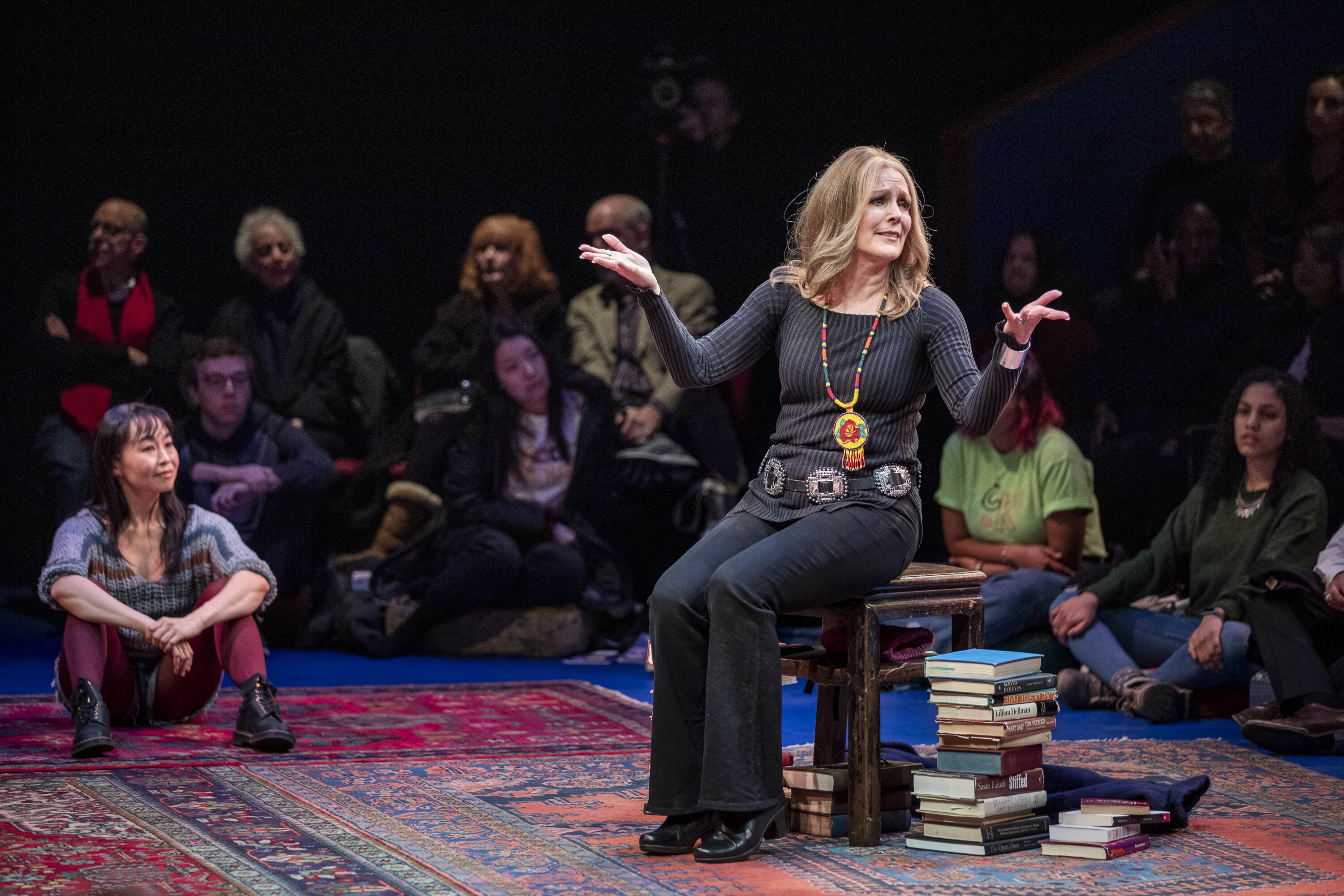 Four years later, with her husband and young daughters in the audience, my mother marched across a stage in a serious black cap and gown to receive her diploma. The first thing she did with her paycheck was to open a personal checking account. Over the years, she made hefty contributions to her three children’s educations, and she never asked anyone permission to buy anything. My mother, the reluctant feminist, was free.

“Gloria: A Life” showcases the life of the eponymous Gloria Steinem and presents both optimistic and political narratives about a woman who declared herself to be a “hope-aholic.” It’s a generous play for the way Kalember’s Steinem shares the stage with an ensemble cast of six that, among many things, recognizes second-wave feminists of color. In researching the play, I discovered that the Wikipedia page about second-wave feminism does not feature feminist women of color, such as Dorothy Pitman Hughes, Flo Kennedy, Fannie Lou Hamer, Shirley Chisholm, Audre Lord, Eleanor Holmes Norton and many more. But these women are recognized in “Gloria.”

The play also brings forward moments that unfortunately remain evergreen and still shocking. Steinem recalls that early in her journalism career, a New York Times editor suggested they continue discussing her work in a hotel room. Then there’s a cab ride Steinem took with Gay Talese and Saul Bellow. Sandwiched between the two male writers, Talese told Bellow that every year a pretty girl comes to New York and pretends to be a writer: “Well, Gloria is this year’s pretty girl.”

A bit of self-deprecation goes a long away in getting to know Kalember’s Steinem. Steinem regrets going undercover as a Playboy bunny in 1963 to write an expose for Show magazine. It was an assignment she wryly noted that dogged her all her life. But Steinem more than made up for it in her lifelong championing of women’s rights, founding Ms. Magazine and appreciating women of color and Native American feminists as important mentors to her. 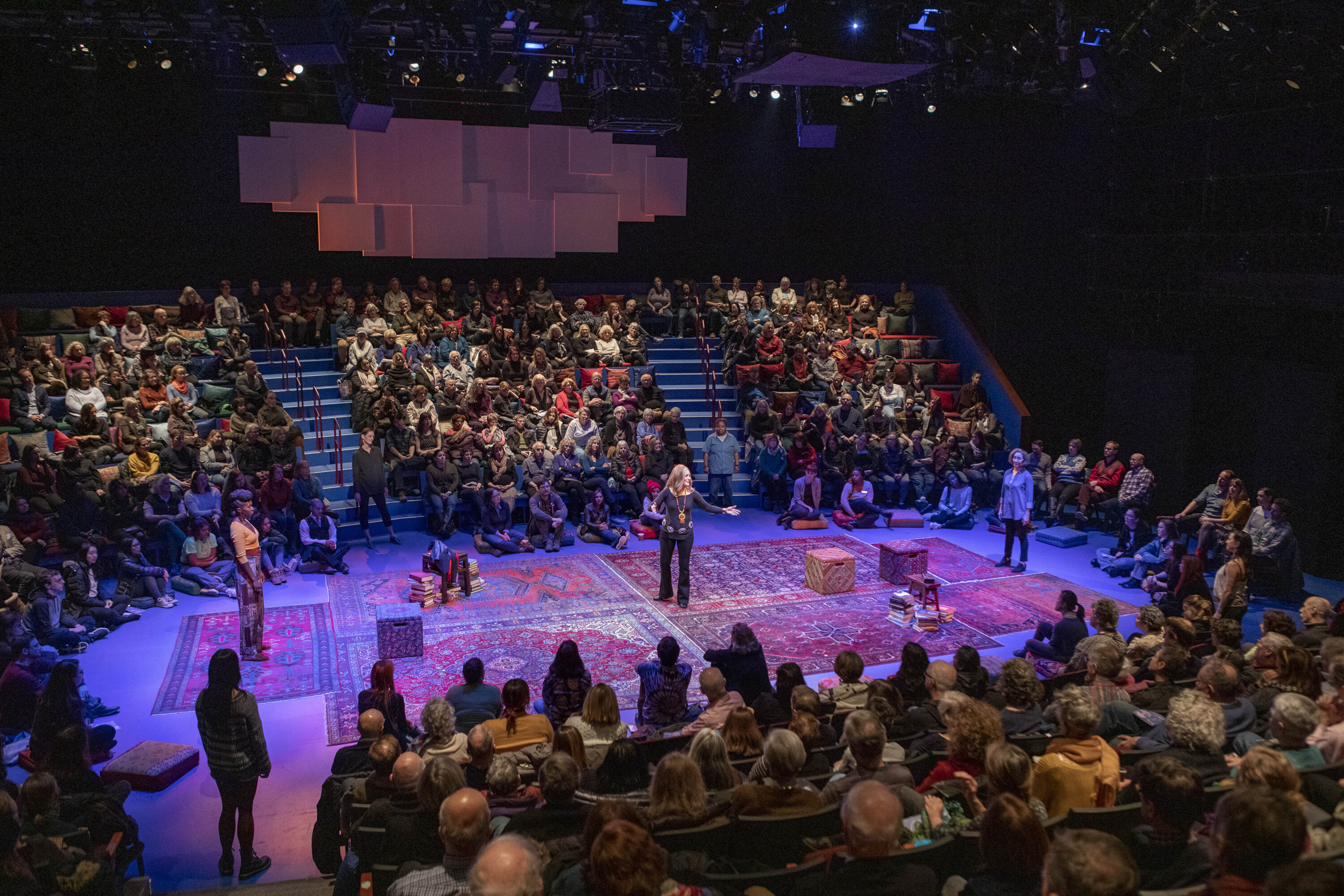 The audience also meets Steinem’s mother, Ruth, a budding journalist who wrote under a male byline before she quit to marry and have children. Ruth Steinem was a depressed, sickly woman, and 11-year-old Gloria was her mother’s caregiver until she went away to Smith College. Ruth is both a positive and negative role model for her daughter. In today’s world, Ruth could have had therapy and maybe even medication to live her best life. How many women did we lose to mid-century notions of a “nervous breakdown?” Too many, I suspect.

One of my favorite moments in “Gloria: A Life” is when Wilma Mankiller, chief of Cherokee Nation from 1985-1995, is on stage with Steinem. A cherished mentor of Steinem’s, Mankiller schools Steinem in the Iroquois origins of the U.S. Constitution. She expands on the idea of the “open circle”: “The heart of our governance is the caucus,” she tells Steinem. “Caucus is an Algonquin word that means ‘talking circles.’ It’s a consensus among women and men. The paradigm of human organization is the circle, not the pyramid.”

Amy Rubin’s in-the-round set also adds to a feeling of openness and coziness. On one side of the stage, cushions and colorful pillows line the risers. Pillows are scattered on the floor of what appears to be Steinem’s living room, complete with Persian rugs and stacks of books. In this intimate setting, Steinem sets the mood by telling the audience, “We’re meant to be sitting around campfires telling our stories, learning from each other.”

Gloria Steinem and other feminists have enabled us to tell those stories on our own terms.