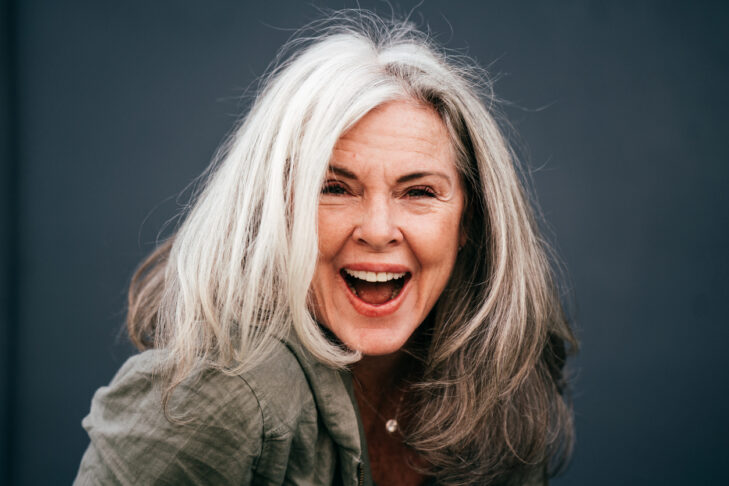 There’s a new hair color that I’ve dubbed “pandemic gray.” Gray, white or silver hair colonizes the head, and suddenly, a distinctive skunk-like streak begins at the hair part. During quarantine, while salons have been closed, the appearance of pandemic gray has sent some women to the drugstore and the internet in search of DIY hair-color kits.

But not everyone is quick to go back to dyeing their hair. I put out a call on Facebook asking women and men to tell me how they felt about going gray in quarantine. The anecdotal results of my survey—all of the respondents, except two, were women—were mostly even: some already had appointments to color their hair, while others were taking a wait-and-see approach. The men were solely focused on cutting their shaggy hair.

Miriam has embraced going gray. When she learned she wasn’t going back to her office until 2021, she decided it was the perfect time to stop coloring her hair. About to turn 59, Miriam said: “It’s OK to be my age. I’m not going to the hairdresser yet, even though my state has allowed it. I realize that as I age, my priorities are changing. I’m not as vain, and I don’t deny my aging.”

Some women see their newly gray hair as a badge of honor. Sue has just started to go gray in her late 50s. She lost both her parents in recent years and saw her emerging gray as “a symbol of my elder status.” She declared: “I earned this gray, and I love it. It reminds me of the scene in Disney’s ‘Fantasia’ when the winter fairies touch the plants with their wands, and they turn white with frost.”

“I was waiting for someone to write about [going gray],” my friend Joan said to me. “My hair is now white. I quit coloring it when I went to be near my son in Los Angeles as he went through cancer treatment. I didn’t care if my hair grew in funny because I didn’t know anyone in LA. I hope others conclude that not being chained to the hairdresser is liberating!”

At 83, Sheila prefers to describe her hair color as silver. “I have not colored my hair since the age of 66,” she said. “I am so happy with my natural color and, guess what? It doesn’t make me look older. People compliment me. Silver hair that’s beautifully coiffed can be an asset.”

A couple of women wrote that they are undecided about coloring their hair again and have DIY hair-coloring kits at the ready if they can’t deal with white hair and faded, dyed ends. Writer and editor Erika Dreifus wrote a humorous poem called “Self-Portrait with Root Rescue™” about the upkeep of her dark roots. It appears in her collection called “Birthright: Poems.” It begins:

It’s expensive, to be a woman
who colors her hair.
It costs money, and time.
(And did I mention that it costs time, and money?)
I indulge in salon visits and try to space them out
as distantly as possible.
Which is how I end up at the drugstore
plucking a box that promises root rescue from its shelf,
then returning home to stand before my mirror
applying the freshly mixed chemicals
exactly as the directions instruct:
along the part, the temples, the hairline.

One Facebook respondent led me to Ronnie Citron-Fink, a Jewish environmentalist and author of the book “True Roots: What Quitting Hair Dye Taught Me about Health and Beauty.” Part exposé and part memoir, “True Roots” is Citron-Fink’s journey of going cold turkey on using jet-black hair dye. She introduces readers to the unpronounceable names of chemicals on boxes of hair dye that go down the drain to pollute our water. “It was a wakeup call,” Citron-Fink said in a recent phone interview. “I work for Moms Clean Air Force, a special project of the Environmental Defense Fund, and I decided I was not putting any more chemicals on my scalp. I had been dyeing my hair for 25 years. The upkeep and the cost were also taking a toll on me.” Citron-Fink packs her highly readable book with a wealth of information on all things hair dye and beauty products. She points out that hair dye is a significant risk factor for bladder cancer. A study found that hairdressers were five times more likely to get bladder cancer, and women who had colored their hair once a month for 15 years or more had a 50% higher risk of bladder cancer.

Dyeing hair is a complicated issue for women. Citron-Fink points to how the hair-coloring industry has romanced the consumer going back to the late 1800s. By the time hair dye took off in the 1960s, Clairol had asked the famous, provocative question: “Does she…or doesn’t she? Hair color so natural only her hairdresser knows for sure!” That ad catapulted Clairol to the top of the industry. Up to that point, only 7% of American women dyed their hair. By the end of the 1960s, 40% of women were coloring their hair. In the early 1970s, L’Oréal pulled in the feminist aspect of coloring hair, telling a woman to choose the company’s dye “because you’re worth it.”

It took Citron-Fink two years to grow out her long, silvery mane. Nevertheless, she’s nonjudgmental about whether or not to go gray. “Everyone has to make their own decision,” she said. “For me, my hair has always been a key beauty asset. I had thick, shiny, Cher-like, almost-black hair. I drew a lot of attention for it, and I thought it wasn’t going to be like that when it was gray. But you never know what your gray hair will look like until you’re done. I feel like I grew into my own skin, and writing the book put things in perspective for me. It’s a long game, and I wanted to be healthy while looking good. I also better understand that aging is natural, and now is a good time to drop the idea that gray hair is going to age everybody. Going gray doesn’t mean you become invisible or have given up on beauty.”

In a run-up to my own 60th birthday in December, I have decided to transition to gray with some help from low-lights. My skunk streak is not quite as stark now, but my gray hair is still visible. I’m leaning into my quarantine roots, owning my age and, most important, guarding my health. As L’Oréal says, “I’m worth it.”