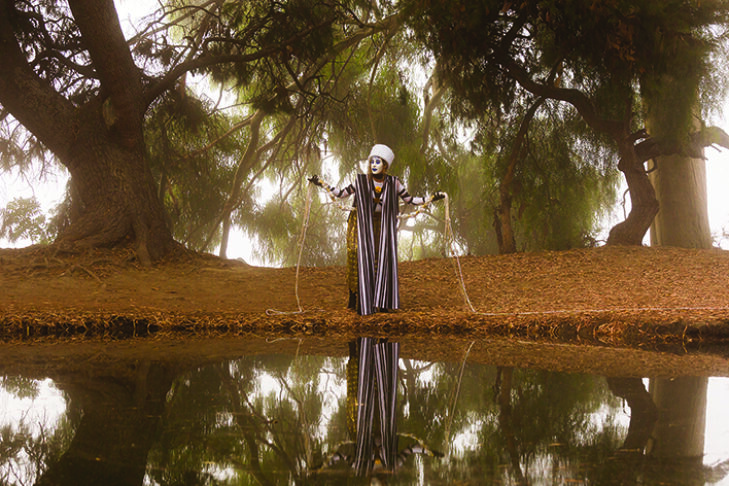 The golem is one of the more evocative, enigmatic myths in Jewish folklore. In a well-known version of the story, Rabbi Judah Loew of Prague creates a Frankenstein-like creature from clay to protect Jews from antisemitic violence in the 16th century. The word “golem” means “incomplete.” The definition presents artist Julie Weitz with the artistic challenge to find meaning as she plays the role of golem in her social media project “Golem v. Golem.” The project is produced by Asylum Arts and supported by CANVAS, the arts funding arm of Jewish Funders Network.

Weitz’s golem project began in response to the protests and violence in Charlottesville, Virginia, in 2017. The latest video component of her golem series, “Golem v. Golem,” premieres the week of Passover—March 28 to April 4—on the Instagram accounts of several organizations that have sponsored Weitz’s project. They include Vilna Shul, Jewish Arts Collaborative and Jewish Book Council. Jewish Book Council has also produced a literary supplement for the project by novelist and peace activist Moriel Rothman-Zecher.

“Golem v. Golem” is part of a larger multi-city exhibition called “Dwelling in a Time of Plagues.” A companion public art installation at Vilna Shul will feature two banners hanging on the side of the building. Scanning a QR code at the Vilna will link viewers to Weitz’s Instagram account and connect to images of her multimedia installations focusing on the California wildfires—“My Golem as a Wildland Firefighter” and “Prayer for Burnt Forests.”

Jewish Arts Collaborative’s executive director Laura Mandel said the Vilna installation reflects “a new way to express Jewish themes. We’re coming together nationally and saying the arts are important to us in the Jewish community. It also shows that the Boston Jewish community is a key player in this national Jewish conversation.”

Dalit Ballen Horn, Vilna Shul’s executive director, expects Weitz’s installation will bring people to the synagogue’s Beacon Hill location. For Ballen Horn, hosting this art “atop the only immigrant-era synagogue in Boston adds a layer of symbolism to the exhibit.”

Weitz recently spoke to JewishBoston about the Vilna installation and her golem alter ego.

How did your “My Golem Project” begin?

I started the project in 2017, right after the Charlottesville rally. After hearing people shout, “Jews will not replace us,” I had to respond. But my response was initially haphazard, and then it developed into a multi-year project. I dressed up as a golem and made videos for Instagram where I staged acts of revenge on white supremacists. I went with the idea of the golem as a protector, as a defender, as a seeker for justice and also as an avatar. It was also born out of Instagram, a space of double and avatar identities. The project took off, and I was commissioned to do a public art project about it. And then there was a museum opportunity. The project grew and took on these different iterations. 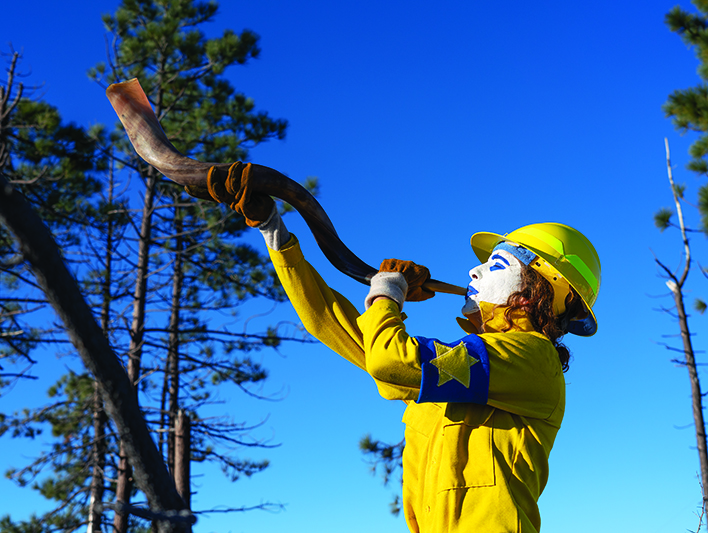 What inspired you about the golem story?

The golem story is about different ups and downs, misperceptions and confusions that I had presenting this character. I’m framing my interpretation around this idea that I’m the golem, and the golem is its own entity, too. The golem was a force that I have related to the rise of antisemitism, the resurfacing of white supremacy and what that means to an American Jew.

The golem has such rich folklore, and its application to the contemporary moment is so fluid. I’m performing this vaudeville, over-the-top draggy exaggerated character. I also got interested in this idea of “Jew face,” which came out of late-19th century vaudeville. Similar to blackface, it was non-Jewish actors performing as Jews. Jewish actors stepped in and said, “We can do this better than you can.” There wasn’t much shame over performing the Jewish stereotype. That has been interesting to me too. I transgress some aspects of Jewish culture by wearing a shtreimel and tefillin, but it’s meant to speak to these problems of antisemitism playfully.

When did you shift your artistic focus to the California wildfires?

I was invited to a residency program in Tahoe National Forest for artists and filmmakers. Participants went through the basic wildland firefighter training to create public advocacy through culture. The U.S. Forest Service’s policy for a century was to suppress fire, and that’s part of the reason that the wildfires are so big. There was also suppression of indigenous cultural fire. I reenacted my wildland firefighter training as a golem. That’s the newest version of the project. My intention is to call people to action and teach them the value of indigenous fire ecology. I also wanted to bring a spiritual aspect to thinking about fire as a force for good. Fire can be regenerative if we use it to treat fire. That concept shows up in one of the still images that will be projected on the facade of the Vilna Shul. I matched those images to two texts I adapted from Exodus.

One image comes from Exodus 2:10: “She [Pharaoh’s daughter] named him Moses, explaining, ‘I drew him out of the water.’” This part of the verse reflects the idea that I drew golem out of the waters. This is also a force of liberation for me as an artist. The second quote that I’m adapting is from Exodus 7:16: “Let my people Go that they may worship Me in the wilderness.” I pair that verse with an image of golem blowing the shofar as a firefighter. Golem is encouraging viewers to see the sacred in nature.

You look like a mime when you’re acting as a golem. Why did you choose to appear in white face?

The makeup is a combination of things. I had been thinking about rising antisemitism and its distinct strain of white supremacy. I also understand my Jewishness in relation to my whiteness. I didn’t understand until recently how my white privilege played into what it means to be an Ashkenazi white Jew in America. I intentionally painted my face white as opposed to mud-brown clay, which didn’t feel right as a second skin. Calling myself out as white in this context is important. A white face is the inverse of blackface.

I also recognize that some of the biggest entertainers who performed in blackface were Jewish. That’s a point of shame and curiosity. I think of Al Jolson, who historically performed in blackface but was also a civil rights advocate. Drag’s influence is evident in the heavy makeup, and the idea of transforming into an exaggerated version of another gender. In this case, it’s another creature. Then, of course, there are mimes and clowns.

How has the pandemic affected your work?

In the pandemic we’re mostly highlighting the work online, but we are also lucky to have the on-site installation at the Vilna. It’s been so interesting for me to study the history of the Vilna. I hope the images at the shul are resonant for people. I joked with Laura Mandel and the Asylum folks that maybe a golem lives in the attic of the Vilna Shul like that famous golem lived in the attic of the Prague shul. I also want to note that there will be a link to Moriel Rothman-Zecher’s text through the Jewish Book Council. This project has always been collaborative and multidisciplinary, but it is particularly so in this moment of the pandemic.